‘Live Ones’ by Sadie McCarney

‘Live Ones’ by Sadie McCarney 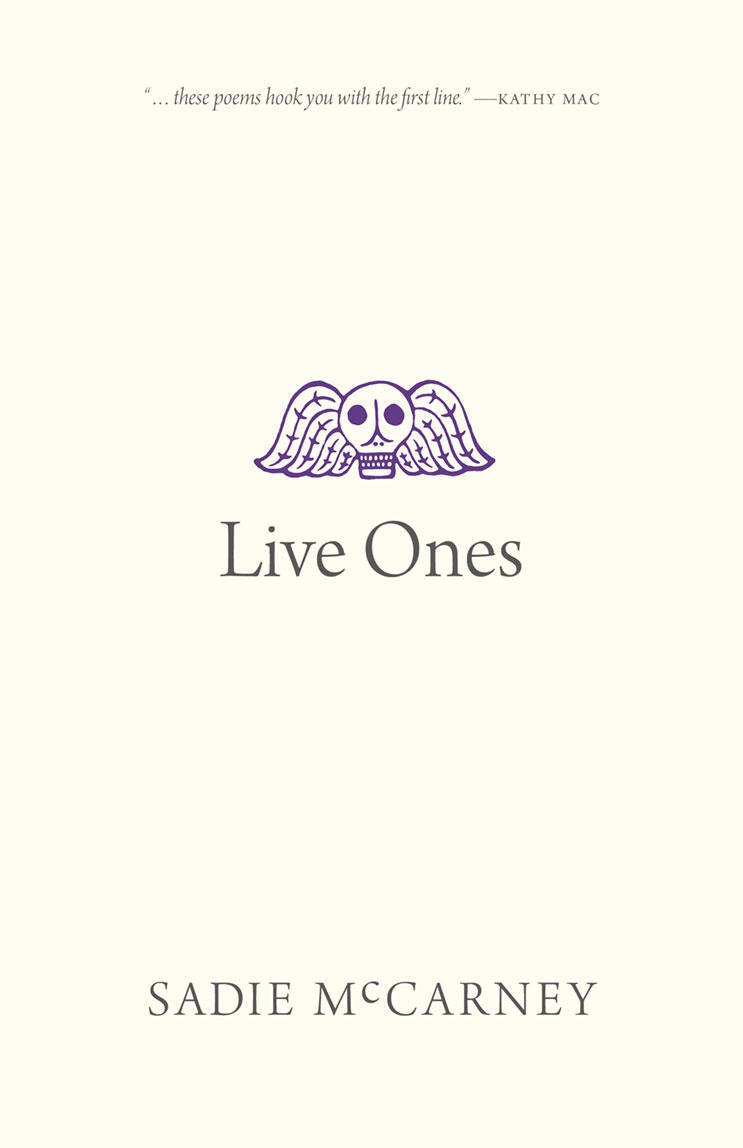 Among the intriguing cover blurb descriptors of Live Ones by Sadie McCarney is this: “[… ] and the complexities of queer female desire call out to us from beyond the grave.”

Bring it on, I thought to myself, always up for female desire in its many forms. I thumbed through the pages expecting to be flirted with, provoked; to come away with some sense of the libido’s afterlife—and while the book doesn’t exactly deliver what I expected, I was not disappointed. And that’s an understatement.

First off, there is a good amount of quiet humor in this collection, starting with the opening poem, “Answer and Be Entered to Win” (I can’t be the only one who finds the title itself, amusing), a found poem drawn from dating site questionnaires.

Both your moms were in line, #243
and #244, the day of the Black
Friday sale  … Your moms
had all the arguments twice. They
figured out who would be ‘Mommy,’
who ‘Mumma,’ … No to dolls but
yes to attachment parenting, parks,
pureed green peas…

And after the stampede as the store opens, the moms lose each other:

This enactment of loss leads quite naturally to “First Death in Nova Scotia, 1997,” a poem that presents “Nick (“the not-right neighbor boy”), who collects bits of dead butterflies with “Gran’s good tweezers” from the lawn. That’s right. Gran’s good tweezers. Live Ones is full of the details that go beyond high craft to the level of art. They fuel the pathos in this collection, and are part of its strength.

I admired the transitions in this book, including the next leap to “Bee Funeral,” starring an insect that had “stung itself to death,” and the poem after that, “Great Aunt,” in which death goes one step further and hovers on a human:

By now her innards are carved up
by the cancer, metastacized every
way like the night’s firework.
Ablaze, and then dead.

And are you hearing the language in these lines? “Ablaze, then dead.” It’s that good, throughout the book. Perfect judgment. Inner critic in harmony with inner imagist, and both in balance with inner human emotion, in all its stony, sticky glory.

“Steeltown Songs,” an eight-part set of poems at the center of the book, presents the grocery checkout line, and a cashier who notices a

[…] spit-thin girl. A spastic 16,
nearer to bald and pitted by pockmarks,
who still watches worms ooze fatly in rain,
still skips a hopscotch to the chimes
on poor porches …

This un-romanticized tenderness toward individuals on the knife blade between childhood and adulthood leads to a flashback that starts out the next piece in the set: “Back then, me and Prue were coyotes.”

Poem by poem, we watch the speaker grow up, “… triceps emboldened by barbells…,” and eventually the setting is Kwik-Way, “where found change paid for half the counter,” and “neon straws and grape-shaped gobs / dipped in sour sugar…” caused the consumers to squint and pucker, “Like steeling for punches. Or for a kiss.”

This is a book that acknowledges both the tenderness and injury wreaked by love.

Poignant truths shimmer into focus in unexpected places, including a mental health ward, where:

… Finally you spy the bowl of fruit
… But when at last you bite
into that Golden Delicious, your glow
underneath the dim-bulb fluorescents
makes me glad I was this damn delirious.

The collection’s final poem recounts moments in a rural town in Nova Scotia:

… We’ve been here since
before the shirtless old man a block up
the street first stripped to watch Maury,
his then-greying chest hair lit
cathode-ray blue.

I can’t un-see that image of an old man’s chest hair rendered “cathode-ray blue” by the television’s glare. There is no shortage of images in this book that stun with their originality. I had never heard of Sadie McCarney nor the press nor the blurbers before I read this collection, and now I’m going to keep an eye out for them all.

Another closing thought: As it turns out, the “queer female desire” I was on the lookout for when I first picked up Live Ones is more a sensibility, than an action. It exists in the examination of intimacy, and the personal histories that inform desire. The living in this collection are not phased by death, or by their own longing. It all exists on a continuum there is no point in fighting.