‘Vow of Celibacy’ by Erin Judge

‘Vow of Celibacy’ by Erin Judge 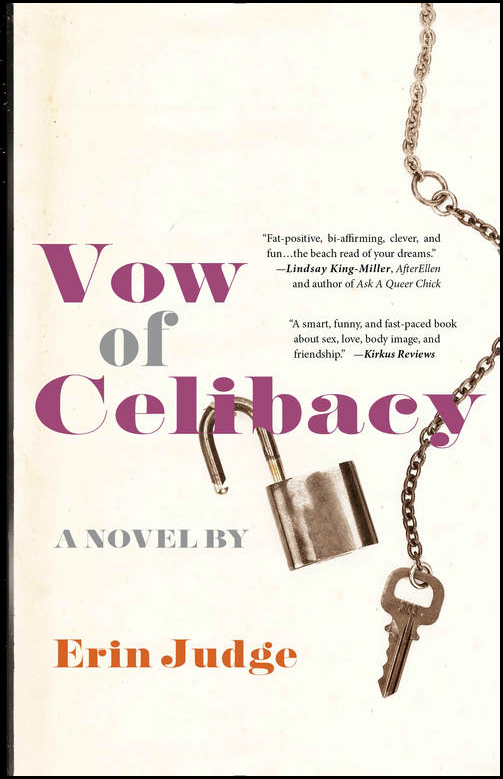 Vow of Celibacy, stand-up comedian Erin Judge’s dishy debut novel, plunges the reader directly into the world of Natalie—bisexual, plus-sized fashion maven, and undertaker of the titular vow. Natalie’s no teenager saving herself for marriage; she’s finally exhausted of her exploits and, with the help of her best friend Anastaze, she plans to spend this fallow period looking deep into the past, at all the “non-relationships” that have muddied her sense of self and prevented her from finding and maintaining true emotional intimacy.

A sexual bildungsroman of sorts, Vow of Celibacy, begins with Natalie and Anastaze at pivotal moments in their young adult lives: Natalie’s giving up sex, while Anastaze is finally deciding to give up her virginity. They’re an unlikely pair, thrown together as college roommates, never fully outgrowing each other, despite their differences. And while Anastaze’s own celibacy is somewhat unbelievable, her support of Natalie as Natalie delves into the stories of her past rings true of all friends who have watched their bestie’s repeated blunders and hoped for better days.

The front story—including the start of a possible new career for Natalie and a long-awaited identity reveal for Anastaze, who pens an anonymous literary blog—is plenty interesting, but it’s the back story of Vow of Celibacy that contains the real juice of the novel. From her first foray into sex to her penultimate one, Natalie unravels her sexual history, examining the intricacies of each. Like many young girls, Natalie conflates sex with love and gets hurt. Unfortunately, Natalie doesn’t then recognize her self-worth and demand a lover deserving of her attention. Instead, she enters situation after situation where she accepts less than her due. She loves sex, and she wields this excuse from her teen years on into her twenties—the sex is good, but the partners are not. It’s absolutely fabulous to see sex portrayed so positively in this novel, but it’s heartbreaking to watch Natalie’s self-deception when it comes to her emotional needs.

One of the recurring strains in Natalie’s story—both present and past—is her weight. She has a calorie-obsessed mother who projects her own issues onto her daughter. Natalie labels herself “chubby,” and repeatedly disbelieves when others tell her she’s beautiful. After a production mishap leaves her one model short at a plus-sized fashion show, Natalie begrudgingly steps into the role. Later, with some gentle prodding from her new friend Gwendolyn, Natalie accepts another modeling gig. As Natalie braves the challenges thrown her way, things begin falling into place. And slowly but surely, as Natalie overturns her past and embraces her future, she begins to accept her worth.

Vow of Celibacy does a good job of portraying the complexity and perplexity of relationships in young adulthood. There’s no one way to discovering what feels good, with whom, and when, and it’s nice to see a confident (in some respects) bisexual narrator figuring her shit out. Natalie’s struggles ring true, even if the events in her life occasionally seem far-fetched, and it’s easy to root for the eventual hard-won transformation that shows its face at the end of the novel. Despite the weighty subject matter, Vow of Celibacy is both readable and fun—Natalie is no shrinking violet, and her life and observations make for quite a ride.

Sara Rauch is the author of WHAT SHINES FROM IT. She lives in western Massachusetts with her family.