‘The Repercussions’ by Catherine Hall

‘The Repercussions’ by Catherine Hall 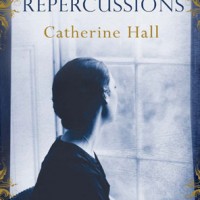 When Jo returns to England from a tour in Afghanistan as a freelance war photographer, she’s not sure about anything anymore. She is reeling, grief-stricken, and utterly alone. Crashing in her recently deceased great-aunt’s Brighton flat, Jo settles in for a psychological exploration of her own trauma from the front. While trying to make sense of all that she’s seen, Jo begins reading her great-grandmother, Elizabeth’s 1914-1915 diary from her time nursing injured Indian soldiers in the Royal Pavilion. Alongside her reading, Jo writes through her anguish in a confession to her former lover, offering perspective on death, violence, and the industry of history making.

Jo’s and Elizabeth’s voices echo each other, both meditating on the consequences of war we don’t see in the news. While these reverberations through history prove revealing, at certain moments in Elizabeth’s entries, we can almost hear Jo chime in to beg to differ. Hari, Elizabeth’s Indian co-worker and crush, explains Indian patient’s belief that “to be killed in battle in the service of the King would be a blessing, because it would end the cycle of death and reincarnation. You’d be sent directly to paradise.” In reading this, we know Jo would be quick to counter that death begets more death and that nothing paradisiacal comes from the carnage of war. In this way The Repercussions explores the idea of “noble” work. Does standing in the line of fire to photograph the terrible things people do qualify as noble work? Does caring for the injured? Having and raising children? Or, this book asks, is dying in and of itself noble? What kind of death might be considered noble?

Both Jo and Elizabeth change as a result of their contact with war. Elizabeth begins her service as a nurse believing that the activities at the Pavilion will be “like a chapter out of a wonderful romance… generations of Brightonians yet unborn will marvel in reading of these days”, only to have her beliefs about India and British colonialism sullied. Even as we see Jo and Elizabeth, in the throes of dire circumstances, change for the better, we see that what they had to lose, namely faith, in order to learn their life lessons is nothing short of tragic.

This book could have followed its characters further into the future, because, by the end, we realize just how far a reach war trauma has on the psyches of those it touches.

One of the most potent aspects of the book is the reality that women pay for men’s actions in war just as in the rest of life. Jo focuses her journalistic work not on the big news of the war itself, but rather on the everyday battles women fight and how those struggles intensify during political wartime. The upshot, the book teaches, is that women are always at war.

This trope is most evident in Jo’s worry that some of her photos resemble those printed of Aisha Bibi on the cover of Time Magazine. The concern doesn’t have to do with artistic integrity or plagiarism, but rather the tragedy that we’ve all gotten used to seeing representations of brutal violence, especially against women, in our every-day lives.

“Because here’s the guilty little secret,” Jo confesses. “The one I’ve never liked to admit to… my work’s bloody good fun… I feel things more. Everything matters.” Robert, Elizabeth’s soldier fiancé, echoes this sentiment: “perhaps he was becoming used to war… and that it was curious, but somehow he wanted to get back to the Front.” Here is revealed the depths of our capacity to assimilate to the brutal. And what’s more disturbing is the book’s implication of the reader in our shared human attraction to the gruesome. What we learn from Jo’s project is the dire consequences of being asked to remain detached under extreme circumstances.

The Repercussions is awesome in its scope. While it deals with some of the most difficult questions of this generation, this book is pure story. Here is the kind of writing that is so good, so transparent that it disappears.

One question though, which oddly enough doesn’t come up, is whether or not large-scale change regarding violence and war is possible. While the story leaves its characters with some hope for healing, a sourness persists in readers who are hungry for resolution. For peace. But that’s not this novel’s aim. The Repercussions does not try to explain war, nor does it try to call us to action. It is simply a chronicle of the ways human beings mess each other up and what it takes, on an individual level, to keep on living.

'Don't Call Us Dead' by Danez Smith
Blacklight: James’ 'A Kind of Justice' Depicts the Struggle of a Shrewd Transwoman Accused of a Vici...
'The Island of No Secrets and Other Stories' by Lou Dellaguzzo

A New Jersey native, Sarah B. Burghauser writes and teaches about Judaism, queer identity, feminism, and erotica. She holds an MFA from California Institute of the Arts, where she has also taught. Sarah has worked with Semiotext(e) Press in Los Angeles and has been awarded fellowships with the Lambda Literary Foundation, The MacDowell Colony, and Vermont Studio Center. She has published with A Café in Space, the Anaïs Nin literary journal, Kirkus Media, and her essays have been collected in, Queer Girls in Class: Lesbian Teachers and Students Tell Their Classroom Stories (Peter Lang Publishing Group 2011), and photo series, GENDERQUEER and Other Gender Identitiesby Dave Naz (Rare Bird Books 2014). She lives in California.