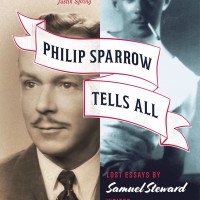 How wonderful that Jeremy Mulderig has reclaimed these lost gems of gay writing. The personal essays in this collection are written from a queer perspective at a time when censorship and homophobia were rampant. It is all the more remarkable considering they were published in the obscure Illinois Dental Journal between the years of 1944 and 1949; penned at the request of its editor, Dr. William P. Schoen, Samuel Steward’s dentist. Thirty of the overall fifty-six essays published are included, authored under the alias of Philip Sparrow. The essays show Samuel Steward’s development as a writer and a gay sophisticate, from the early essays which centered awkwardly on dentistry from the patient’s perspective, to a wider range of topics–bodybuilding, cryptography, psychiatry, espionage, opera, pet cemeteries, Gertrude Stein, Chicago, and Paris.

Samuel Steward earned a PhD in English from Ohio State University and held over the course of his life several academic posts including professorships at Loyola University and later at DePaul University.

Steward counted Gertrude Stein and Thornton Wilder among his friends and, while in Europe, he also met with Andre Gide, Thomas Mann, and Lord Alfred Douglas. Steward, in later life, went on to befriend numerous gay artists and writers including Paul Cadmus, George Platt Lynes, Julien Green, Fritz Peters, and Glenway Wescott. Stein, though, was Steward’s greatest champion and mentor. He corresponded and visited with Stein and Alice Toklas for many years. Stein’s death in 1946 was a huge blow to Steward’s psyche.

In the early 1950’s Steward met Alfred Kinsey, the famous sex researcher, and committed himself to his own form of sex research by keeping a “Stud File” card catalog on all his sexual adventures

Each personal essay is annotated by Mulderig and includes footnotes that help place the essays in historical, cultural, and biographical context. This goes a long way towards vividly painting a portrait of Steward as quirky, brilliant, provocative, witty, poetic, and fiery. Through double-entendre and word-play, Steward asserts his gayness.

As Mulderig points out in his excellent Introduction in On Chicago Steward employs a surfeit of homoerotic imagery:

I think of Chicago as a man-city, healthy, sweaty, and sensual. It is Gargantua with his head in Evanston, his feet in Gary, and he lies Relaxed and smoldering along the lakefront. The trees of Lincoln Park are the curling man-hair of his chest, the trees of Jackson Park the foliage upon his legs, the tall buildings of the Loop his sturdy muscles, and the whole anatomy of the city his outstretched body.

And after describing a medieval recipe for preparing a wolf to eat in “On How to Cook a Wolf” (a satire on M.F.K. Fisher’s food writing), he ends with:

For my part, I cannot rest until I find a wolf to try it. Unfortunately, there is in these parts a scarcity of the four-legged kind, so I have a notion to call up “Esquire Escorts” [Bonded Male and Female Escorts for All Occasions] and ask them to send me out an unbonded one, a tall, husky, grey-eyed blond of the two-legged variety. Then, clutching my trusty cudgel, I’ll lay him flat as he enters the door, and set to work.

The gay sexual contexts here are evident and it is any wonder the good dentists of Illinois did not pick up on it. But such was Steward’s skill, intelligence, and wit that he could get away with it.

And finally, his most fiery and political essay concerns racism in the South toward African-Americans and is entitled A Modest Proposal. Written for the July 1949 issue, Steward essentially realized it would be his last as he was fired soon after its publication.

Be it a sensitive prophecy of the difficulties soldiers will have reintegrating into American society after World War II or a humorous take on male fashion, Steward’s range of subject matter is impressive. Steward, who was born in 1909, died in 1993 at the age of 84 in Berkeley, California.

'Trespass' by Thomas Dooley
'Queer and Trans Artists of Color: Stories of Some of Our Lives' by Nia King
'Chronicle of a Plague, Revisited' by Andrew Holleran