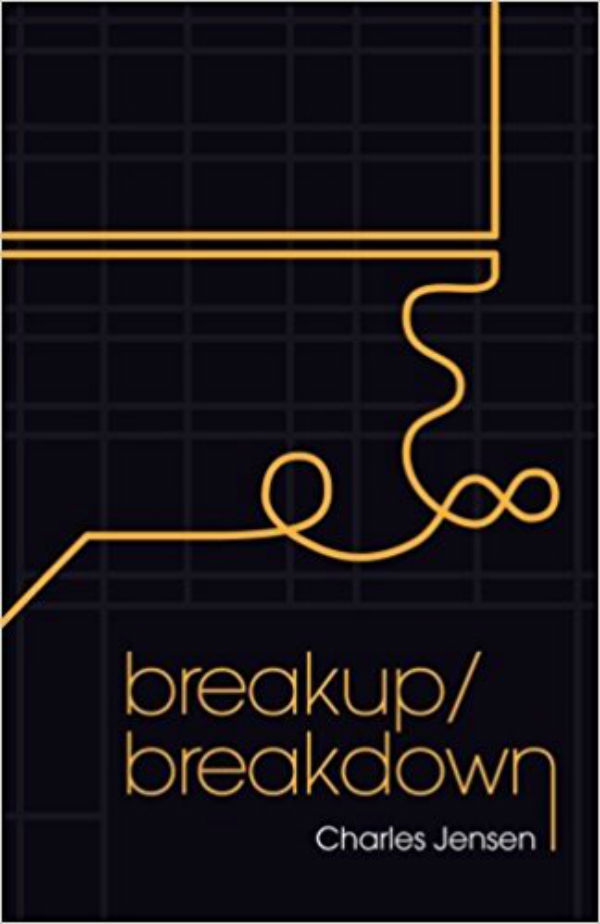 Charles Jensen’s chapbook Breakup/Breakdown is about heartbreak and the trials and tribulations of romance. It is a very honest book and a departure from his previous work, which tends more toward the experimental. Using simple non-rhyming couplets, his conventional narrative verse is plainsong, measured, direct in its address, and heartfelt. Never too far from references to American culture, many of the poems are presented as a series of “selfies” with famous female characters from literature and film, women who have also experienced the madness and drama of jilted love. Miss Havisham from Great Expectations, Medea from the famous classical drama of the same title, Alex Forrest in Fatal Attraction, Norma Desmond from Sunset Boulevard, and Annie Hayworth from The Birds, all are alluded to.

Like Tennessee Williams’ work, there is a camp tradition of gay male writers using great heroines from culture to embody the emotional and erotic attraction they felt towards other men. In a previous age of censorship, these expressions of same-sex desire could only be described in the correlative of tragic women pining “for their man,” or suffering the consequence of being used, and yes spurned. The exaggeration of such love affairs and the dramatic and mannered responses of the women involved helped underscore the homosexual subtext. It was only there, that gays could capture glimmers of suppressed and thwarted homosexual feeling. Such were the demands of camp and the imperatives of doing a “queer interpretation.”

Jensen not so subtly plays off of this trope, not through dissemblance, but by “owning” this connection openly and with a sense of irony. As he writes in “Selfie with Alex Forrest from Fatal Attraction”:

Alex went too far, yes.
But imagine you are

in love, the man of
your dreams takes

you to bed and seems
taken with you

as much as you are
him; then he drops

you as careless as a dirty
sock into the laundry

bin and it’s just another
reminder how when

This revelation carries with it none of the heavy trappings of evasion and secrecy of another age yet the poem does make a humorous pass at archetypal domesticity by the line: “then he drops/ you as careless as a dirty/ sock into the laundry/ bin.” A “dirty/ sock” indeed.

Then there is the ironic title of Jensen’s poem “On the Night Gays Across America Celebrate the Marriage Equality Ruling, You and I Divide Our Possessions.”

You will go on and have a life
I’ll choose not to know. Some

man will love you, I think, and
maybe even better than I have.

What’s ahead for me?
I don’t think it’s a man. I think

It ends with the sobering lines: “I only know/ when it comes to love/ I can give, and I can give up.” This use of zeugma or syllepsis is rhetorically effective and further lends irony to an already sad situation. The repetition of “give” with the slight addition of “up,” makes all the difference in meaning.

Antithesis is nicely used in “Selfie with Norma Desmond from Sunset Boulevard” when the speaker of the poem writes:

she [Norma Desmond] gave you [Joe, the reporter] was
everything though she had

nothing: an empty
mansion, a dead-end career,

Joe, who is desirous of “money, fame, attention” and the “everything” of Hollywood, finds instead the “nothing” that Desmond can only offer. This being the great contradiction of celebrityhood, that much of its supposed abundance is based in illusion.

The collection ends on an upbeat note. In “Selfie with Molly Jensen from Ghost” the speaker and Molly Jensen of the film seem to arrive at the same wise conclusion: “You and I know what it means/ to watch love desert you and know/ everything’s going to be okay.”

Everything is okay in Jensen’s verse, which playfully toys with the reader as it presents its modern take on ancient and not so ancient stories of love. Case in point is the opening to “Selfie with Ophelia from Hamlet and Justine from Melancholia”:

crazy the way
everyone suggests;

let’s say she
was just really

pissed off at
Hamlet and his

douche self-
important quest to

avenge his father’s
death. I mean,

a ghost talked him
into it, so let’s get

real about who
is really crazy,

Here Ophelia is “pissed off” at Hamlet, “who/ is really crazy,/ okay?” in a witty twist using American slang and role reversal. The tale of Hamlet is subverted and told from the reverse perspective of Ophelia, who usually is a passive, secondary figure in the play. This campy reversal challenges older gender stereotypes and offers a new feminist slant. The speaker of the poem reports: “So Ophelia’s like,/ Great, my hot crush// is fucked in the head/ and thinks I’m a whore// or wants me to/ give up sex forever . . .”

Jensen’s is a short, quiet, and personal collection, one that in its straightforward simplicity offers many delights. For anyone who has experienced love and heartbreak, they will find this chapbook a worthwhile read.