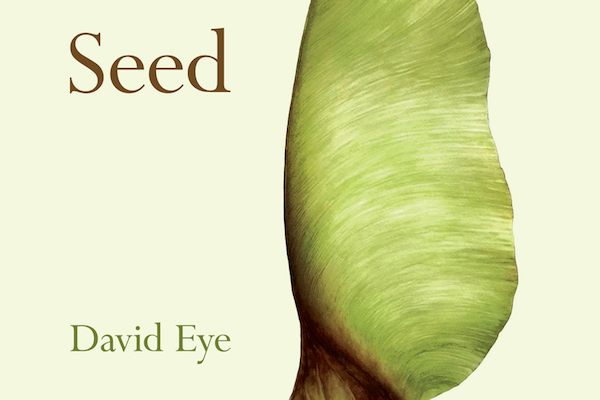 With Seed, the poet David Eye moves the reader back and forth from the rural to the urban, from the past to the present, from Virginia to New York, and affords us a hardscrabble look at growing up queer in remote Virginia.Eye has a remarkable gift for natural description; he mixes a captivating lyricism with darker tones of realism. The standout poems, which include “Not That You Asked,” “A Distant Line of Hills,” and “Winter Hike,” are beautiful depictions of the natural world, that contain a well-drawn, painterly sensibility. It should be noted that these poems are not just soft and innocent recollections of a rural existence, they are tempered with a hardened perspective. Finely observed, these narratives are tough-minded, be it the interactions of a son with his recalcitrant father while snake hunting; the love and envy between a brother and his sister; a last visit to a grandmother’s house on the day of her funeral; a glimpse of strangers on a city bus; or a sexual encounter with an Italian man in a bar in Florence.

There are elements of innocence and naiveté in Eye’s verse, but they are always mixed with a sharper knowledge: a sexual encounter with a twenty-year old skinny-dipping in a pond, a seduction by a guitar-playing older cousin, a tryst with an aged director. There are gay rites of passage such as the wait for the results of an HIV blood test at the New York City Health Department and the resulting negative status with all its attendant guilt and relief. Eye gives us the surprising and varied complexity of human relationships: from a video booth encounter and some quick sex with a married man, to an impromptu make-out session with a straight blonde girl in a bar, to an unassuming woman on a bus carrying a copy of Leathermen’s Guide to the Universe, to a stateside Iraqi vet who harbors a secret photo collection of sunsets over Baghdad.

The title of this collection directs us toward beginnings and origins, toward sex, procreation and those forces which guide us to maturity. Eye accomplishes a canny mix of tender and harsh imagery.

A poem such as “The Creek Empties into a Field” is one such pastoral occasion where a wife at her in-laws in West Virginia goes to an old outhouse under moonlight only to miscarry her child:

Her hands fly down to stem

in the swift stream, dispassionate midwife.

In “If We Went Back to Maple Ridge,” the speaker in his thirties returns to his grandmother’s home to participate in her funeral. The poem lovingly details the natural setting of the house:

The long dirt drive to the white frame house

will have gone green from lack of wear

except for twin tracks too hard-packed

for even the hardiest weed. The border

of forsythia, though a massive tangle, still

a hallelujah chorus in the spring.

The swingless porch littered by how many autumns,

and flat slates leading around back now snaggle-toothed

and tombstoned by frost heave, the oaks’ gnarled roots.

The speaker lifts the coffin and “bore her out and into the hearse’s long maw.” Eye closes with:

We won’t go back to the farm. Her gardens are no doubt

But in hottest summer, jar flies–what she called cicadas—

early evening, the cadence of crickets and katydids all night.

The dramatic confrontation of a son with his father is likewise strongly captured in “Snake Hunting.” The son, turning eighteen, defies his father by stating emphatically: “No./ I won’t do it anymore. I won’t help kill/ them, or cut off their rattles. You go on,” The father, we are told, when crossed would turn “wild-eyed,” a sight that would make “your skin crawl because/ you knew the coil and strike behind it.” But the father backs down ultimately when he sees the son not budging. It is that first moment of resolve and defiance, where the boy becomes a man in his own right.

The wonderfully evocative “Pond,” with its underlying homoeroticism and lyric couplets. Two boys, a twenty-year-old and the sixteen-year-old speaker, “puddle” their clothes in the “dew-wet grass,” and find themselves suddenly naked out-of-doors. They enter the pond and Eye writes:

[. . .] the insistent pond licks at our shoulders

and armpits and his fingers on my chest, my stomach

thrilling, my jaw vibrating in discovery. Our limbs entwine

like eels, one hand each daring as far as its reach, until

I let go and  slide down his torso, luminous in the teeming

water. A new world, silent but for the pounding in my ears.

Until I have to breathe. He laughs at my zeal, I in relief,

and we kiss. On our lips, the pond, the generous moon.

Eye explores a variety of poetic forms from the prose paragraphs to couplets, quatrains, sonnets to villanelles. His language is always magically fresh and alive, and his tone ever compassionate.