‘From the Belly’ by Virginia Bell

‘From the Belly’ by Virginia Bell 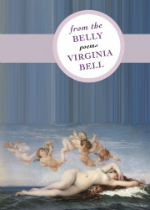 “Path-making seems / altogether necessary and impossible,” writes Virginia Bell in her new book of poetry, From the Belly, effectively encapsulating the overall message of the book. Bell is largely concerned with the creation of meaning but ultimately cedes to uncertainty and multiplicity within her poems.

Within the book, Bell manages to cover innumerable subjects, many of which are elucidated in opposites: Life and death, childhood and old age, home and estrangement, sexuality and destruction, voice and silence. From “What Holds Constant”:

Things came out where things had gone in – and it was
worth it. This desire to crawl in, or be crawled into,

holds constant. This insistence on seeping out, too,
or being shoved. Oxygen in its relation to hydrogen.

Cramming all these themes into a thirty-four-poem collection could have produced a clunky and ungainly book. However, Bell grounds her work firmly in the tangible, the livable, and the everyday, producing instead a series of pieces that serve to lift the mundane to higher planes of thought and sensuality.

The fulcrum of the piece is the image of the body: male, female, young, old, broken into components, or viewed in its entirety. “Kidneys” isolates the body part and reimagines, questions, and mistrusts it. “The Workshop” examines the womb and the urge to create. “I Was Damning the Traffic” is a celebration of the human form in the face of its marginalization. It is through the body and the senses that Bell explores the world and its complications.

Through the body, we come to sexuality. Her portrayal of female sexuality is full and resonant, starting with the first realization that “evolution really happened in reverse, / that I would devolve from a human into an animal furred and thick.” Although the poems are not explicitly autobiographical, they read as confessional, truths whispered between friends, admissions both honest and vulnerable.

Her poems also deal with family – the search for home, the comparison between TV expectations and reality, the sexual identity and death of her father. In “No Words for These Matters,” she writes of outing her father as queer, but the poem lacks any tinge of blame – instead, the reader is left with a sense of finality, the closing of a childhood chapter.

It is worth noting that although the collection feels personal, Bell draws heavily from other artists. Included are poems inspired by writers Anne Carson and George Oppen, photographer Sally Mann, and Haitian artist Fritzner Alphonse. She also begins many of her poems with quotes; some notable examples include Pablo Neruda and Wikipedia. The addition of so many other voices is, at times, overwhelming; however, Bell grounds the poems in imagery and personality enough that the reader does not become unsure of her voice.

It is this precise, measured, and unhurried voice that carries the book. Without the simple, arresting imagery and careful word choice, the reader would easily become lost in the bevy of themes presented within the work. What she offers are not morals tied up pretty in a bow; she knows that is not possible. “I wouldn’t know how to run if running / became that easy,” she writes. Instead, she holds out an image – a snail, a plum, a kidney – as an anchor for the reader.

From the Belly is an earnest exploration, one almost without expectation, that Bell delivers to us. It is the imperfect map of her journey, which she describes with such skill that we do not begrudge the absence of easy revelation, but instead are grateful for the catharsis. In the closing poem of the book, “Things We Find,” she writes:

However muddled, turbulent, joyful, and devastating our existence is, it is ours. Ultimately, this collection of poems is an affirmation, and a joy to read.

‘When I Grow Up I Want to Be a List of Further Possibilities’ by Chen Chen
Pat Spears: On Tackling Evil and Writing with Compassion
'Tell Me Again How a Crush Should Feel' by Sara Farizan

Arielle Yarwood is a researcher, copywriter, and creative writer in the Pacific Northwest. Previously she was an Associate Editor on Jeopardy Magazine, and is currently working on a bilingual chapbook of poetry.