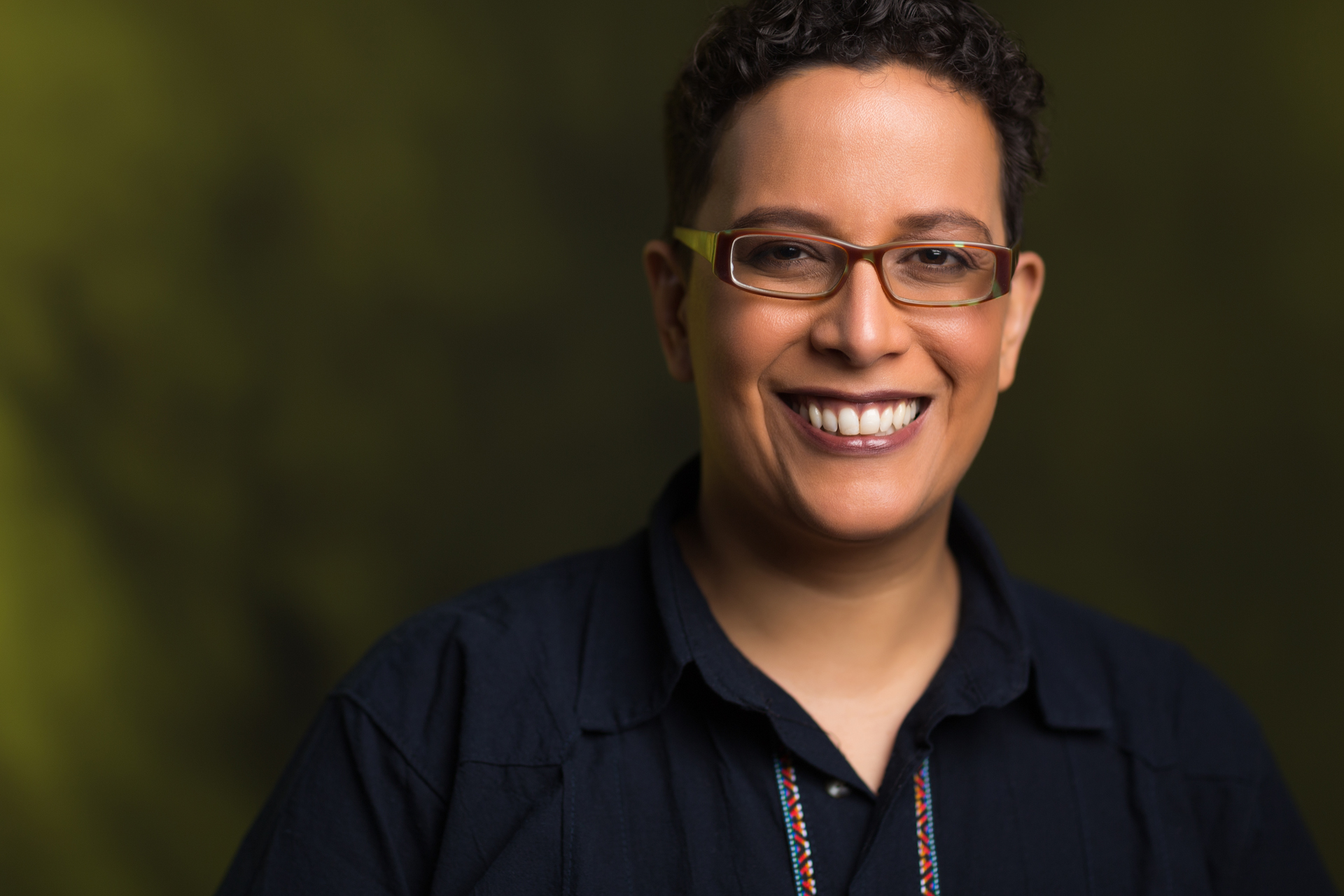 The award is issued in memory of the celebrated author Randall Kenan, and honors Black LGBTQ writers whose fiction explores themes of Black LGBTQ life, culture, and/or history. The award includes a cash prize of $3,000, made possible through the generous support of sponsors Cedric Brown, Darnell Moore, Dr. L. Lamar Wilson, and Steven Petrow.

Ana-Maurine Lara (PhD) is a national award-winning poet, novelist, and scholar. She is the author of: Erzulie’s Skirt (RedBone Press, 2006), When the Sun Once Again Sang to the People (KRK Ediciones, 2011), Watermarks and Tree Rings (Tanama Press, 2011), Kohnjehr Woman (RedBone Press, 2017), Cantos (letterpress, limited edition 2015), and Sum of Parts (Tanama Press, 2019). Her academic books include: Queer Freedom: Black Sovereignty (SUNY Press, 2020) and Streetwalking: LGBTQ Lives and Protest in the Dominican Republic (Rutgers University Press, 2021). Lara’s work focuses on questions of Black and Indigenous people and freedom. She has been published in literary journals (Sable LitMag, Transitions Literary Journal), scholarly journals (Small Axe, Bilingual Revue, Sargasso, Feminist Review), and numerous anthologies, as a scholar and as a creative writer. She is currently an Assistant Professor at the University of Oregon, in the Department of Women, Gender and Sexuality Studies. She can be found on Facebook and @zorashorse.

Are there any LGBTQ writers or books that you count as formative influences to you as a writer? How did you discover them?

Absolutely. When I was 17—the summer that I went to my first AIDS march in New York City and right before I went to college—I found a short story by Jeannette Winterson, the British lesbian author, in an issue of Granta. Now, Mount Vernon, NY library kept any books with LGBTQ material under lock and key. You had to ask a librarian to get those books for you. But they didn’t do that for literary journals. I don’t know why I picked up this issue of Granta, but I did. And there was the short story “The Poetics of Sex”. The first line was, “Why do you sleep with girls?” After that, I couldn’t put it down. The story blew me away and not just because it was lesbian but because I had, up until then, never read a story written like that. I then went on to search for and read everything by Winterson. After her, I learned about Audre Lorde from a random white dude on my college campus who saw me and gave me his copy of Sister Outsider. He literally walked up to me, put the blue book in my hands, and said, “I think this is for you.” I didn’t know what to do with that, except accept his gift. And wow—how deep was it that this book fundamentally shifted my life. It was the first time that I saw language reflecting my lived experience. After that, I was hooked. I searched for and found Lorde’s poetry and her bio-mythography Zami.

I used to walk around with a copy of Zami just so that I could pick it up and re-read parts of it. And then, I learned about the local feminist bookstore in Sommerville, MA (I was in college by this time). There, I picked up a copy of This Bridge Called My Back edited by Cherrie Moraga and Gloria Anzaldua. That entire anthology was deeply influential, and it led me to Chrysto’s poetry and Toni Cade Bambara’s fiction (“Are you sure, sweetheart, that you want to be well?”) and I also got to meet Leslie Feinberg when ze presented hir book, Stone Butch Blues. And then, and then…I read James Baldwin. I was not blessed with his work until college. And even then, I read the majority of his work after college. I read and re-read Tell Me How Long the Train’s Been Gone periodically, along with so many other books that were influential for my life (I mean, I found April Sinclair’s Coffee Will Make You Black in an English language library in Fortaleza, Brazil of all places). These books were all essential to keep me alive. But, direct influences on my writing—well, I would have to say Gloria Naylor’s Mama Day is absolutely influential, as are Zami, The Salt Eaters by Toni Cade Bambara, The Famished Road by Ben Okri, and The Farming of the Bones by Edwidge Danticat.

What does a writing day look like for you?

Ooh, well, now it depends on the kind of writing I’m doing. For novels, fiction, I like to sit down for many hours at a time (usually 4-6 hours) because I enter into a semi-meditative space, you could say a spirit space. I treat it like a ceremony and I begin first thing in the morning, without talking, or doing anything else besides making myself some coffee and walking over to my desk to write. I start and then fast until I am finished. Poetry is a different matter though. Poetry is an all-the-time kind of affair. If I am working on poetry, I am thinking about language and concepts continuously, enabling poems to form throughout the day over a course of months (or years). I write poems as they come to me and then work on them when I need to be in their company. I must also admit that I am seasonal, meaning that I change the time of day, the focus of my work, the kind of writing, depending on the slant of light. And, throughout the year I schedule my writing time and treat it as a sacred time-space that must be honored.

Are there other LGBTQ writers working today whose work you particularly admire?

Absolutely. So many, though I must admit the first who come to mind are poets, and many are my Cave Canem peers: Phillip B. Williams, Aricka Foreman, Marvin K. White, L. Lamar Wilson, Danez Smith, Dawn Lundy Martin, Rickey Laurentiis, Samiya Bashir, Cheryl Boyce Taylor, JP Howard, drea brown, Carl Phillips, r. erica doyle, and so many others whose books and chapbooks fall out from my shelves. I also love and have always loved and been inspired by the works of John Keene, Renee Gladman, Tisa Bryant, Adelina Anthony, Sharon Bridgforth, Daniel Alexander Jones, Alexis Pauline Gumbs, Alexis DuVeaux, Dionne Brand, Shani Mootoo, Djola Branner and Chinelo Okparanta, Akwaeke Emezi. And, Latinx LGBTQ writers Myriam Gurba, Gabby Rivera are bringing it in the YA department.

What are you reading now? Is there any book that you’ve found cathartic or instructive during the pandemic?

I have found the Lambda Literary Foundation’s lesbian romance lists to be completely cathartic and wonderful. I have gone into the archives and pulled up the lists from the past few years and read everything on this list. I am, however, frustrated that there are almost no Black, Latinx, Asian American, or Native American lesbian romance writers. If that were a genre I could write, I would do so because we need stories about our kinds of loves—loves rooted in politics of freedom and joy and body-sovereignty. So, it has been cathartic, and eye-opening. On the heels of searching for love and community in the worlds between pages, I also really began to reflect on the place of shame in shaping my life as a Black lesbian.

I realized that even with all of my accomplishments, shame continued to linger in my psyche. This became even more apparent as I navigated institutional spaces and their ridiculous and gross responses to Black pain and death. The more I fought to create space for my own experiences, and the experiences of my Black queer kin, the more I found myself feeling shame about speaking up. So, I decided to read Sonya Renee Taylor’s The Body Is Not an Apology: The Power of Radical Self-Love and Morgan Jenkin’s This Will Be My Undoing: Living at the Intersection of Black, Female, and Feminist in (White) America. Though Jenkin’s book is very cisheteronormative (thus leading me to Renee Taylor’s work), I found both books to be important for me as I enter middle age as a Black lesbian in America, and I am grateful for the work of this younger generation and their insistence on speaking about the power and liberation of our bodies. Bernadine Evaristo’s Girl, Woman, Other and Isabel Wilkerson’s Caste also became important texts in conversation with Renee Taylor & Jenkin’s work.

What’s next for you?

Well, 2020 was a very prolific year: I published two academic books—Queer Freedom: Black Sovereignty (SUNY Press) and Streetwalking: LGBTQ Lives and Protest in the Dominican Republic (Rutgers University Press). In May 2021, I realized a collaborative performance (“Sanctuary”) that was two years in the making. That was incredible. I am attempting a sabbatical in which I do nothing for a while, at least a few months. We’ll see how that goes because I do have other projects in the works. My second full-length novel, Injured Stone, is currently in review at a press. Injured Stone is a re-imagining of Haitian-Dominican relations as told through the life story of four female protagonists who live along what is currently the border between both countries. I continue working on a collaborative Digital Humanities project, “The Healers Project”, which just received a Mellon Foundation grant in 2021. And last, but not least, I cannot forget a project I am very excited about—my friend and colleague, drea brown and I edited the anthology Teaching Black: The Craft of Teaching on Black Life and Literature which will be released by University of Pittsburgh Press in November 2021. I think this anthology is amazing and that it is going to be really significant for the current and next generation of writers, and I am so, so excited about it.