‘What the Night Demands’ by Miles Walser

‘What the Night Demands’ by Miles Walser 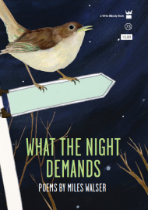 “If I were a postcard, she could hide me in her pocket / if I were clay / she could mold my body into something easier to love, if I were the / guy who sells her cup of coffee every morning, I could smile at her/anonymously, safe as a stranger. / She kisses down my neck, my peel hiding the rotten fruit inside me / as I tell her about the cyanide, her head resting on my chest, she talks / about cider, autumn pies. See, she says, apples are harmless. But she saves / the last bites for me, scared to let her pips wander too close to the core.”– from “We Eat an Apple in my Bed” (page 41)

Described as an exposition of his “many-hued self,” What the Night Demands is a book that takes on the ambitious project of chronicling gender, positionality, and the jarring juxtaposition between public and private. A renowned performance poet, Miles Walser attempts the oft (problematic) task of bridging together the two worlds of slam and page poetry—a goal that is a challenge not only of this specific manuscript, but also of Write Bloody Press, the publishing company that put forth this title along with the work of other slam poets (such as Elaina Ellis, Buddy Wakefield, Cristin O’Keefe Aptowicz, and many more).

Walser’s background in performance poetry lends itself well to a style of writing that is both roving and conversational, a style that utilizes the subtle complexities of page-poetry craft (including, but not limited to line breaks and white space) while laying a colloquial and accessible intonation. The result is both refreshing and disconcerting. Shifting speakers, narratives, and cinematography sometimes at multiple points within the same poem, often left me feeling disoriented, alienated, and swept away—which is a clever tactic for conveying outsider experience.  The work called to mind documentary poetics found at times in other writings about marginalization or public/personal trauma (think Katie Ford’s Colluseum, Nikki Finney’s Head Off & Split, or anything at all by D.A. Powell), with a performative twist.

While I felt that some of these poems would have fared better as performance pieces (due in part to intonation, body language, and the public realm), a few poems struck me as intensely personal; that is to say, a personal, private experience, one that a reader has with a piece, in solitude, and without voyeur. “We Eat an Apple in My Bed” calls upon the question of intimacy, its sufficiency in our lives, how we as queer folks often mistake it for deep connection, how our marginalized statuses force us to believe that we live in a romantic starvation economy—that harm is good for us, that we can love only in secret and be satisfied, that our lives really exist in the sheets in the off-hours of the day.

For the primary speaker in Walser’s poems, the world exists instead as a set of images—there is revolution in his fantasies (“Birthday Girl”), in the gentle ways he takes care of his body (“Letter to My Vagina”, “The Man I Am Tries to Take the Girl I Was Through Airport Security”). How do we do the intensely difficult work of breaking down social constructs of gender as they have been taught to us in ways that revolutionize ideas and bodies outside of the hetero and gender-normative box we have been socialized to believe in? It is rare to see a masculinity that challenges ideas of misogyny and binarism, and poetry—both page and performance—is such the queer intertextual space to achieve that in. Genre comes from the French word meaning “gender.” What is a queerer genre than one that challenges musicality, the body, the line, and attempts to bridge the vast gap of the human experience? Joy Katz writes in “Symposium” that poetry enacts experience. It seems to be that poetry is not only the most apt vehicle for transmitting a radical message about gender and bodies, but also a wholly necessary one