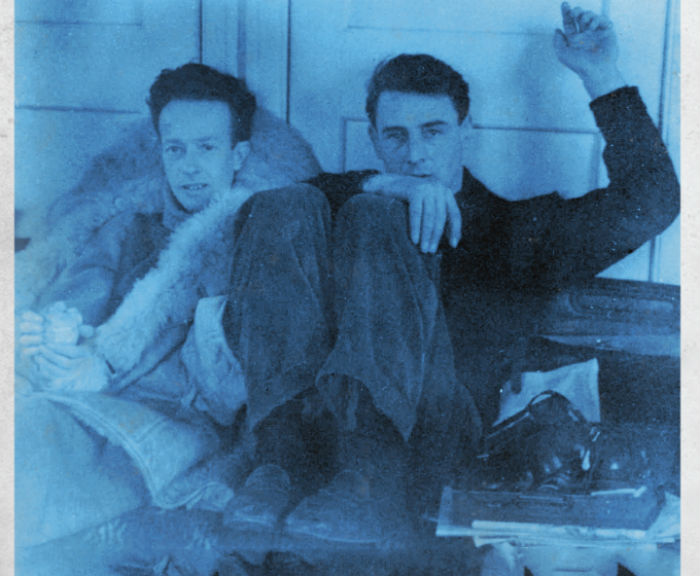 “I want people to read about us 500 years from now,” the novelist Denton Welch rhapsodized to his friend and sometime lover, Eric Oliver, in a letter from 1943. We can’t know about 500 years, but the first complete collection of Welch’s letters to Oliver, edited by Daniel J. Murtaugh and published by the University of Wisconsin, suggests that fascination with this complicated affair has certainly lasted 70 years.

These letters add a final, nuanced stroke to our picture of Welch, following The Journals of Denton Welch, edited by Michael De-La-Noy and published by Dutton in 1984, and a biography by De-La-Noy, Denton Welch: The Making of a Writer, brought out by Viking the following year. The biography quotes extensively from the letters to Oliver, but they had never been published in their entirety.

Denton Welch (b. 1915 in Shanghai; d. 1948 in Middle Orchard, near Kent) occupied a place in British letters between the bright young things of the twenties and the angry young men of the fifties. He is best known today for an autobiographical first novel, Maiden Voyage, published in 1943. Three more novels followed, including the brief, feverish In Youth is Pleasure (1945), and a substantial body of short fiction and poetry. Edith Sitwell called Welch “that very rare being, a born writer.” W. H. Auden, Vita Sackville-West, and William S. Burroughs were also admirers.

A mutual friend introduced Welch to Eric Oliver in the fall of 1943. Welch identified as homosexual and had long been attracted to strapping land boys. For his part, Oliver recalled, “I knew at once [Denton] was something out of the ordinary.” But any physical relationship between the two was brief and awkward. Oliver identified as at most bisexual, and, while he was drawn to Welch as a person, he once said, “I don’t think I was physically attracted towards him.” The relationship was further complicated—yea, even defined—by Welch’s physical condition. Six years earlier a bicycling accident had left Welch, then twenty, with a fractured spine, a host of kidney, bladder, and pelvic issues, and what Murtaugh calls “a degree of sexual dysfunction.” The accident cut Welch’s life short without killing him, generating in him enormous rage, resentment and regret, especially over what he missed sexually. Tortured over this loss, and rightly anticipating that he would not live long in any case, Welch, in turn, tortured both himself and Oliver. The letters alternate between soaring proclamations about love lasting 500 years and bouts of grave pessimism, bitter attacks on Oliver and others, and vicious self-deprecation.

While the scholarly value of these letters is clear, and while Murtaugh’s annotations are superb, the text can be tough on the general reader. Welch seems to have maintained this oeuvre as a mechanism for clinging to the feckless, alcoholic Oliver. Though Welch makes some interesting and witty observations about the time and place—Kent in the midst of World War II—the text mostly alternates long bouts of fretting, pleading, scolding, despairing and self-loathing. Suicide is mentioned more than once. A long letter from February 1944 is typically exhausting, yet it is also, in its way, a masterpiece of sexual and mortal anxiety raised to a level of ontological significance, as Welch clutches at Oliver’s heart—and thus at life itself—with pleas, gossip, scolding, wheedling, despairing, self-abasement, literary eye-batting and fussing over domestic minutiae.

Occasionally Welch becomes, in these letters, the very thing he suggests he must be—unlovable. Eventually, for what reason we know not, Welch in late 1944 leaves off obsessing and scolding and turns outward to give Oliver more news of neighbors and friends. Only now, Welch barely mentions their relationship, further contributing to a problem we have had all along: it is difficult to root for this couple. One partner records mostly his own self-centeredness and rage, while dropping clues that the other partner is withholding, deceitful, a petty thief and an addict. (Oliver did write back to Welch, but he later destroyed all but one of those letters. Oliver died in 1995.) While there is indeed affection, there is, as mentioned, very little romance or sex; Oliver’s inclination and Welch’s condition made both near impossible. There were good times, but Welch does not detail those to Oliver, as he doesn’t have to; Oliver was there. Mostly we are left with Welch’s horrors

That we don’t have Oliver’s letters actually elevates the quality and impact of those horrors. Oliver’s seeming silence makes Welch seem like a blind man, begging for help as it dawns on him that night is falling and no one will come. Murtaugh refers to his subject’s “pervasive sense of doom” and Welch himself speaks of “the extraordinary sadness of everything.” But fear of abandonment by another person, though to some degree justified in this case, was a displacement. Welch was really raging at the living death of his physical condition and the anticipation of his actual death. Though wearing, this epic anxiety can be quite moving, and it may be more moving in Welch’s journals, where presumably it leads beyond Eric Oliver.

Murtaugh’s generous notes excerpt those journals and reveal a more expansive, less misanthropic artist at work. The notes, ultimately, inspire us to read more by and about Welch. If one seeks Welch’s fiction, for example, one is amply rewarded. The anxiety expressed so unattractively to Oliver is transformed, unfurling across the pages of In Youth Is Pleasure as breathless, baroque escapades and fantasies, part Proust, part Poe, part Treasure Island. Maiden Voyage, arguably Welch’s best work, perfectly vindicates Sitwell’s judgment. Though more measured than In Youth, Welch’s first novel is minutely observed and executed with unique creativity and a sexily confident voice. There, in the pages of Maiden Voyage, and yes, fitfully in the pages of the letters, is the out-of-the-ordinary man who so captivated Eric Oliver.

David Pratt is the author of three novels, Wallaçonia (Beautiful Dreamer Press), Looking After Joey (Wilde City) and the Lambda Literary Award-winning Bob the Book (Chelsea Station). David's story collection, My Movie, (Chelsea Station) includes new work and short fiction published in Christopher Street, The James White Review, Velvet Mafia, and other periodicals. David has directed and performed his work for the theater in New York City at HERE Arts Center, Dixon Place, the Cornelia Street Café, and other venues. He was one of the first directors of work by Toronto playwright John Mighton, and he is currently collaborating with Michigan-based performance artist Nicholas Williams.