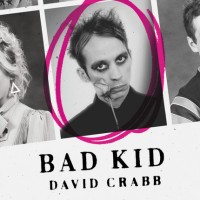 Bad Kid, based off of David Crabb’s current solo show of the same name, is a love letter to his childhood friends, his parents, the music of his adolescent life, and his slice of the world during of the late 80s and early 90s. Crabb artfully mines the high drama of the goth/new-wave culture that sustained him during his hormone-fueled and drug-influenced teenage years for comedy. It is not all comedy as he skillfully captures the emotions he felt, the connections he made, and the moments that really mattered to him.

Crabb’s memoir begins with a scene of his family waiting at a red light as group of goth kids cross the street. His father remarks that “they look like superheroes going to a funeral.” A young David, however, is enthralled by these “amazing creatures.”

David survives his middle school years in San Antonio, trying his best to avoid being called a “faggot” by fading into background. His high school years, however, have other plans for him. With the help of George Michael’s Faith, an issue of Interview featuring Marky Mark, and Penthouse, David’s able to confirm to himself that he’s gay. The initially mysterious Greg Brooks, a confusing combination of friend and unrequited crush, introduces to him pot, eyeliner, Ouija boards, and Depeche Mode. From there, both are introduced to the alternative scene and their own band of misfits.

With the addition of a group of new friends, David finds acceptance, a new aesthetic, access to the local gay bar, and complications as well. The stakes soon start getting higher as the drug usage increases, the nights last longer and the looming danger of the local skinheads becomes realer each time they go out. Finally, there’s Max, a member of the aggressive anti-racist skinhead off-shoot, SHARP, whose friendship beguiles David.

Soon, it all begins to catch up with him. David is forced to live with his mother in the suburbs, his friends slowly splinter off, and a few incidents show to him that the fun times are nearly over. No longer an ‘amazing creature,’ David tries figure out who he really is.

Bad Kid is a compelling read because Crabb has translated his oral storytelling skills to the page. There’s a strong momentum to the book and very few words feel wasted. If he’s not making a reader laugh with a wry observation or bits of witty dialogue, David provides a strong narrative thrust to the story that makes a reader want to turn the page.

Bad Kid also has some charming flourishes. Beyond the inclusion of band names, songs and lyrics in the story, each chapter is named after songs such as The Cure’s “Kiss Me Kiss Me Kiss Me” or New Order’s “Age of Consent.” Readers are also treated to photos of him and his friends from the era with commentary in the captions.

His ability to immerse a reader in the time period and setting through his writing deserves attention as well. Some of this is seen through particular attention to detail, such as descriptions of the time period’s fashions of choice, from the loafers and hair bands of the preppy kids to cataloguing the various hairstyles of the punk and new wave kids. One great example of this is a scene where his extended family watches Whitney Houston sing the Star Spangled Banner, which serves both as reference to the time but also allows Crabb to show common cultural attitudes in his hometown through his relatives.

Crabb also provides a glimpse into how puzzling the early 90’s was for gay kids across America. Turning on MTV, you could see Pedro on The Real World and TLC rapping about sex in outfits made up of condoms. Major gay cultural figures at the time included RuPaul and Greg Louganis. Cultural awareness of homosexuality was gradually moving beyond simple stereotypes and attention towards the AIDS crisis was increasing, but these attitudes were not widespread. Young David has these images, ideas, figures and portrayals in the back of his head as he creates his own identity.

Stumbling through one’s adolescent life is a near universal experience, but Crabb makes his story invariably his own without sacrificing connections with readers. For those who grew up during the era, the book is sure to have you laugh and cringe with recognition. For those who didn’t, the book immerses you so well that it doesn’t matter. Either way, the journey of Bad Kid is one well worth reading.

'The Parting Gift' by Evan Fallenberg
Alysia Abbott: A Trip to Fairyland
Literary Mixtape: Aspects of Myra, Reflected in Film (1935–45)

Alex is Brooklyn-based writer. His work has appeared in The Billfold, The Inquisitive Eater and The Ink and Code. Alex earned his MFA in Creative Writing from The New School.