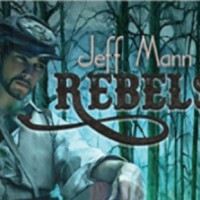 In time for the sesquicentennial of the ending of the American Civil War, Jeff Mann has given us Rebels, a volume of poetry inspired by those four bloody years, seen through a queer lens. Readers of Mann will know that he is no stranger to this bloody conflict: in 2012 he published Purgatory, a novel about a star-crossed romance between Privates Campbell and Conrad, soldiers for the Confederacy and the Union, respectively; in 2014, he completed the story of their romance (and trek to West Virginia at war’s end) in Salvation, winner of a Lambda Literary Award for Best Gay Romance. For those unfamiliar with Mann’s oeuvre, there are three things to remember:

All three of these topics emerge repeatedly (as do others, of course), and not in isolation.  Mann’s fondness for bears defies century, as he waxes equally eloquent about J.E.B. Stuart (“Laurel Hill”), Turner Ashby (“Ashby Fantasia 1”), and twenty-first-century re-enactors. Food provides the subject for one of his darkly humorous poems, “Manassas Picnic,” which describes the picnicking civilians from Washington, DC who came to witness the Battle of Bull Run. And sex appears throughout the collection, from hypothetical sex between prisoners of war (“January Night, Johnson Island”) or between Mann and one of his heroes (“Making Love to Stuart”) to actual sex with re-enactors (“After the Reenactment 2”). Two poems (“Shep—December 1864” and “Shep—After the Great Snowball Battle”) are especially poignant, and read as prayers by one of a pair of lovers, hoping only that he and his comrade may live through each day in order to share another night together.

In some ways, Mann’s travelogue of Civil War battlefields reads like a modern-day pilgrimage. He writes about the battles that took place in his home state of Virginia, but also includes a poem about Pickett’s Charge at Gettysburg (“A Few Yards of Pickett’s Charge”), and another about a Rebel soldier’s graveyard in Ohio (“Camp Chase”); he even pays a visit to Washington, DC, “In the Capital of the Enemy.” Mann’s journey allows him to examine the strange juxtapositions of the past and the present—for example, the exquisite bakery now on the site of Moulder Hall, a former hospital for the wounded of Antietam (“The Shepherdtown’s Sweet Shop”). Everywhere, his appreciation for beautiful men causes him to reflect upon their bravery, virtue, and heroism; not just of the generals, but also for the rank and file soldier, many of whom were barely out of their teens.  Mann extols the brotherhood of men who face adversity together, and the heartbreak of comrades’ deaths: “The Gallant Pelham” eulogizes John Pelham, who, when he died, caused Jeb Stuart to weep openly; this poem boasts a long literary lineage that extends back through the Aeneid, the Iliad, and Gilgamesh.

Mann’s volume of poems is more than a nostalgic meditation on the romanticism of a lost cause. He does not shy away from the horrific aspects of the Civil War: the POW camps, where so many soldiers died of disease, neglect, and starvation; the brutal necessity of amputation and how it was accomplished; the senseless deaths of so many young men, both Rebel and Union. He even goes so far as to acknowledge the irony of his hero worship—for how accepting would the Confederate soldiers have been of a queer in their midst (“Weeping Freak”), had he been alive to join them?

Mann also unapologetically writes from the point of view of a rebel (for all that he is married to a Yankee from Massachusetts), a perspective that may put him at odds with some potential readers—as demonstrated by his poem “Dixie,” which describes his love for a song that is now dismissed (by Northerners and Southerners) as inherently racist. Mann is giving voice to a complex historical vantage point many may wish to forget.

In closing, I would be remiss if I fail to note how the verbal imagery of Mann’s poetry is beautifully complemented by the illustrations of eighteen different artists. Indeed, the artists reinforce the themes discussed above, most notably the interconnection of the past and present (Ben Baldwin, Rob Appleby, and Jon Hunt), food (Benedicte Caillat), and the nobility of beautiful men (Orion Zangara, Craig LaRotonda, Ashley Holt, Tijmen Ploeger, and Joanna Barnum).

Keith Glaeske is a medievalist and collector of speculative fiction currently living in Washington, DC. His articles about medieval literature have been published in Medieval Perspectives, Traditio, and Ériu.