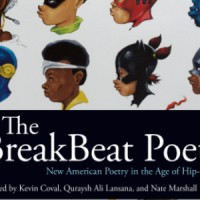 “I think the reality of hip hop is that women and queer people and a lot of folks who we think about being in the margins have always been at the center of the culture.”

Hip hop is a diasporic practice that is one part of a large and vast ecosystem. Many of us have known it to transcend nationality, lived experiences and race. Then, there are these ever-present curveballs of gender, sexuality and age. How does hip hop interact with those identities? While gender appears to be a frontrunner that leans heavily to the misogynist right, the latter two seem often times to lounge on the outskirts like members of the team who are always benched until everyone else has been invited up to bat first. On the contrary, The BreakBeat Poets blows right through those preconceived notions with more than you could imagine finding in an anthology centered on hip hop.

While the three editors—Kevin Coval, Quraysh Ali Lansana and Nate Marshall—are cisgender male and vets of the culture via several literary avenues in their own right, the names and stories of communities often assumed to be on the sidelines are readily on the tips of their tongues. Coval is the Founder of Chicago’s Louder Than a Bomb: The Chicago Youth Poetry Festival, professor of Hip Hop Aesthetics at the University of Chicago, author of several books of poetry, and a four-time HBO Def Poet. Lansana currently teaches creative writing at Oklahoma City University, having formerly been a faculty member at Juilliard, and has authored eight books of poetry, three textbooks and a children’s book. Marshall, the youngest of the three, is a Cave Canem Fellow, a founding member of the poetry collective Dark Noise, and a rapper from the South Side of Chicago whose forthcoming first book, Wild Hundreds (University of Pittsburgh Press), won the Agnes Lynch Starrett Prize.

At first look, it appears you’ve picked up an overstuffed comic book from the future. On the cover are some of Hebru Brantley’s full-color cartoon sketches of brown superheroes who mirror the little boys and girls you’ve seen riding their bikes around the way. But it’s better than that. Here you have a compilation of seventy-plus poets arranged chronologically by birth year, from 1961 to 1999. With some poets having just one masterpiece featured and others up to five, the book is packed to capacity with stories, told in verse and prose, splashing around and spanning far beyond the surface definitions of hip hop as you’ve known it. In true fashion of the culture, The BreakBeat Poets is clad first and foremost with fresh writing woven carefully together using the vernacular of the people the poems are written by. Slang and code switching here become more than vehicles but rather strategic tools that move you from a state of literary voyeurism to one of pedagogy. With each poet offering a brief front row seat to the inner workings of her/his mind, you are invited into the grey that exists in between each of the five elements of hip hop.

But I’m not going to act like this book doesn’t take trips outside to the alley with a piece of cardboard and a boom box, heralding the breakers, MCs and graffiti artists. Some of the fun that gets had in traversing through each poem involves experiencing the beauty and celebration of black culture, told through those who grew up on hip hop firsthand with it being a space to dream, a way to bear witness, a means of survival, and an assertion of self. Above all, each page utilizes language and experimental form to demand that you hear and see the writer and, by default, the many subcultures of the hood.

One of the most refreshing elements of TBP is the presence of queer women of color. Among them, Angel Nafis, Aziza Barnes and Camonghne Felix shine not as a sparkly add-on, but as an integral piece of the story embedded in every chapter. While police brutality, suicide, substance abuse, systemic oppression and state violence hover as umbrella themes, they clearly operate alongside art that challenges cisgender male-dominated space and the intersectional burden of everyday micro-aggressions toward all women of color. Just like its introduction states, TBP is only the beginning of a larger dialogue and road ahead of work to be done, but it makes a hell of a scratch beyond the surface. It digs past simplified stereotypes and outdated narratives and opens us up to thoughtfully crafted work that positions hip hop not only as a culture, but also as a messenger of social context, a vehicle of political response and a tangible solution.

How long have you been bleeding?
How many partners do you have?
How many male? Are you sure?
Have you ever had chlamydia?
Is she your only partner?
Can she leave the room? Are you sure
you have two ovaries?

—Angel Nafis, What the Doctors Say to the BlackGirl

here,    –while he is paying attention to your beautiful eyes,
_______your essential femininity, which of course

is the thing
about black girls

how can you be right about your feelings? 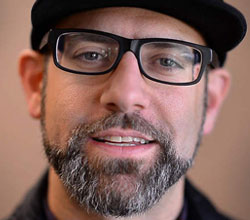 You open The BreakBeat Poets with an introduction that serves as a mini-history lesson as well as a personal account of your experience with hip hop during which you directly state, “Hip Hop is black, therefore hip-hop poetics are Black and are created in part in response to the historic and currently maintained legacies and realities of white supremacy and institutional racism, the war on drugs, and the growing privatized prison-industrial complex and school-to-prison pipeline, a.k.a. the New Jim Crow, as Michelle Alexander calls it.” Your poem “White On the Block” is featured alongside the other poems. The ability to speak to the political nature of this culture and mindfully reflect on your place within in it is incredibly moving. What has hip hop taught you about yourself, and what has it meant to you as a cisgender white male?

Kevin Coval: Hip hop was created as counterculture. One of the main values of dominant, heteronormative, white supremacist culture is for whiteness to remain silent, “unseen” and unheard. White folk were scant in hip hop’s public cultural creative space for the vast majority of its now forty-year existence. As a kid, going to witness and then participate as a creator, rather than as an audience member, in the public cultural space of hip hop meant that I had to leave the house and the neighborhood and traverse lines of segregation that city planners had hoped we would not. With each stop south, my whiteness became increasingly visible. The neighborhoods, radically segregated in Chicago, looked different than my own, not only racially but also structurally and institutionally. In the jam itself were a mixture of Black and Latino and some Asian kids. For a long time, I thought my name was that white dude. I was one of, and many times the only, white kid going to the Afrocentric Bookstore, to open mic spot Another Level at Lit X, or to Jesse de la Pena’s Blue Groove Lounge.

Via hip hop public cultural space, my whiteness became visible and a site for discourse and inquiry. Because of the Black Nationalist African Centered aesthetics of the culture, hip hop sent me to the library to first read Malcolm X’s autobiography, then find in similar sections Lenore Bennett Jr.’s Before the Mayflower: A History of Black America and Dudley Randall’s anthology The Black Poets, a text that was essential in the conception of The BreakBeat Poets. Because of what I was reading and because of my negotiation of whiteness in public spaces where I was often the only or one of the only white people, hip hop gave me early, consistent and persistent opportunities to wrestle with my whiteness and my role in its maintenance or deconstruction.

In reading through this anthology, it’s refreshing to discover that people from so many walks of life can find themselves and their experiences somewhere in the book—whether or not they consider themselves having grown up immersed in hip hop culture. It’s surprising and refreshing, yet it seems like it was a part of the plan. As someone who is from the small town of Enid, Oklahoma, can you speak more to the significance of several experiences being reflected in this project? 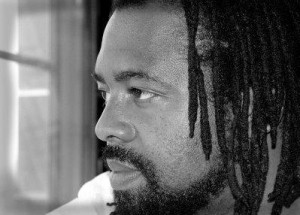 Quraysh Ali Lansana: It speaks to the perseverance and pervasiveness of hip hop, regardless of whether one claims it as an authentic reflection of their lives or as a fiction (as comic book superheroes and superheroines are fiction), as we know the number-one consumer of rap records are suburban teenage white males. This is not a pejorative comment, as despite misogyny and homophobia being rampant in mainstream rap, everything is truly welcome in real hip hop. Though hip hop was born in urban U.S. environments, it is global on international, national and local levels. Yes, it was important to the three of us that women and the LGBTQ community were represented in the book. Because these communities are not only important to hip hop; they are part of our (the editors’) families, as important to us as Tony Medina repping the Nuyorican experience by way of the Bronx, or Suheir Hammad repping Palestine by way of Brooklyn. When one experiences witnessing young white males in my small town Oklahoma bumping Tupac out of a Ford F150, it helps you understand the presence of the music and culture.

The book closes with an essay in which you write, “Hip-Hop, like the dominant worldwide culture, is cis-male-hetero dominated. This is wack. This is a vital point to start with and one that I will return to later, and that we all must return to in every conversation.” You also have noted that while reflecting a myriad of cultural backgrounds, sexual orientations and social experiences was intentional in the process of putting this book together, it was also unintentional because the book naturally reflects the reality of who is apart of hip hop culture. Can you please say more? 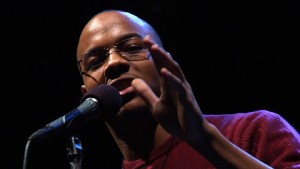 Nate Marshall: I think the reality of hip hop is that women and queer people and a lot of folks who we think about being in the margins have always been at the center of the culture. Hip hop dance styles have been originated and innovated by a number of queer practitioners. The first hit rap record was produced by a woman, and women have since that time had vital roles as key players in the hip hop industry. Even though hip hop is a site of the ugliness of misogyny and homophobia (like many cultural spaces the world over), we have to continue to push the culture to grow and the cipher to expand, and we have to stop telling the lie of absence.

Candice Iloh is a poet, creative writer, and educator residing in Brooklyn NY whose work has appeared in Insight Magazine, Blackberry Magazine, and the Fjords Review January 2015 Black American Issue. She is a Voices of Our Nation Arts Foundation Alum and the Managing Editor of Quiet Lunch Magazine. Her latest independent collection of poems 'Breakfast From Her Skin' can be found on TwoPensandLint.com and she can be contacted at www.becomher.com.