An atheist might be said to believe in everything that can be seen. Perhaps one could add a belief in the betterment of humankind, in improving the planet, and in an agreed upon ethical system of right and wrong: Do not kill, steal, cheat, discriminate, etc. Disregard for the ethical code and the offender (in the atheist canon) transgresses no real law except an agreed-upon code of ethics. That ethical code, of course, can be altered by varying cultures and civilizations, bringing to mind Samuel Butler’s famous quote: ”Morality is the custom of one’s country and the current feeling of one’s peers. Cannibalism is moral in a cannibal country.”

When a friend of mine once told me that he believed in God but didn’t believe in an afterlife, I was confused. How can God exist apart from the unseen reality of an afterlife? What would be the point of honoring a God that permitted one a lion’s share of earthly suffering (and occasional rewards) but offered nothing after death sans extinction? What would be the point of our earthly struggle?  Why would a presumed eternal God keep “eternity” for God alone?

For many LGBT atheists, the roots of atheism can be traced to the intolerance and hatred that many religions (and religious people) exhibit towards gay people. While a superficial take on theology is understandable for a time, disproving the existence of God should go much deeper; it should delve into the stuff of theology and philosophy and not be based solely on whether most established religions have problems with homosexuality.

Chris Stedman’s book Faitheist (Beacon Press) is a far cry from the typical run of embittered atheist faith-bashing manifestos. The word ‘faitheist,’ for instance is Stedman’s term for atheists who have a tolerance for the religious beliefs of others. Stedman is aware of what he calls “the false dichotomies that keep us apart,” and he wants no part of that. I know what Stedman means. In the late 1970s and early 80s I worked for the LGBT press and was privy to the reactions of an activist or two whenever Good Friday rolled around. The tone in the editorial room on Good Friday was not respectful at all. One “shout out” phrase from that time still haunts: “This is the day that they hung that bastard on a tree!”

Stedman believes that belligerent attitudes like this are not only nonproductive but they go against Emerson’s warning that we need “to be careful what we worship, for what we are worshipping we are becoming,” meaning that negative fixations on religion and people who practice religion will work to distort our worldview, and have us “hating” forever.  Hating obsessively can be a form of idolatry or “worship.”

The author, who grew up in an evangelical Protestant family and who is currently the Assistant Humanist Chaplain at Harvard University, was at first a strident atheist who “wanted nothing to do with religion.” Stedman writes that he “spent some time decrying the universal ‘evils of religion,’” but then something happened. “I was treating religion as a concept instead of talking to people who actually lived religious lives. When I started listening, something interesting happened: I saw that my approach to religion had been distorted. I’d been thinking narrowly about the texts, not about some of their positive applications; of one-sided stereotypes, not the diverse spectrum of beliefs and practices…”

Stedman believes that, “Atheism must move beyond defining itself—both in thought and practice—in opposition to religion. If secular Americans want to be respected in our religiously diverse culture, we need to recognize that there is nuance and complexity in the diversity that defines it.” 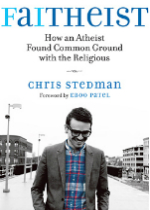 With this said, Stedman’s description of how he arrived at not believing in God seems to lack the probing depth that such a question deserves.  Somehow his train ride from believer to non-believer seems altogether too fast. “As I studied religion,” he writes, “I took a step back and reflected on the arguments for and against the existence of God, and was underwhelmed by the evidence…It became apparent that believing in a divine force simply didn’t resonate with my experiences or how I understood the world.”

The author at one point dismisses a deeper look into his atheism, when he writes: “Some theologians and religious practitioners tell me that dry spells happen and that perhaps I gave up on God too quickly, but years later I am surer than ever that I don’t believe in God, and struggle to recall why I did in the first place. To be honest, the question no longer intrigues me—I’m much too interested in the complexities of being human to spend much time thinking about anything beyond that.”

Peter Hitchens, the non-atheist brother of now deceased Christopher Hitchens, writes in The Rage Against God, or How Atheism Led me to Faith, that living according to a code of ethics, or “a low level of cooperation by mutual consideration,” is often a temporary thing. “…As soon as we move beyond subsistence and the smallest units, problems arise that cannot be resolved by mutual decency. Some people grow richer, some are stronger, some acquire weapons. Power comes into being at a very early stage in human society. So do greed, competition for scarce resources, and wars with other groups. Mutual benefit ceases to offer any kind of guide to behavior…” Hitchens then goes on to ask: “Who is to say, in a city ruled by a single powerful and ruthless family from an impregnable fortress, that the strongest is not also always right? In fact, the Godless principle that the strongest is always right has been openly declared as recently as the twentieth century in Mussolini’s Italy and operated in practice in Hitler’s Germany, Stalin’s Soviet Union, and many other states.

“A law that does not stand above brute force and have some sort of power that can overcome brute force will not survive for long,” Hitchens adds. “If [atheists] know or are reasonably certain, that there is no ultimate authority and no judgment issuing from some unalterable laws, they are instantly quite extraordinarily free. But this freedom is as available to monsters and power-seekers as it is to advanced intellectuals dwelling in comfortable suburbs.”

Stedman’s book is still a refreshing counter polemic to the angry atheist screeds of recent history. Read the author’s story and you’ll come away with the feeling that he really is the nice guy who lives next door.

It would be negligent of me to finish this column without mentioning the fact that in the early days of the Roman Empire, Christians were accused of atheism and godlessness because they did not accept the Pagans’ gods. While Stedman offers no replacement for God per se outside of caring for one another as human beings and issues concerning equality and justice, he does advocate a greater dialogue with religious communities. “We must find solidarity wherever we can—and act upon it,” he states.

This is a good superficial first step, fit for any public stage or dialogue but existing in a world quite apart from the deeper questions surrounding belief.

Thom Nickels is a Philadelphia-based author/journalist, the author of nine published books, including: The Cliffs of Aries (1988), The Boy on the Bicycle (1991-1994), Manayunk (1997), Gay and Lesbian Philadelphia (2000), Tropic of Libra (2002), Out in History and Philadelphia Architecture (2005). In 1990, Mr. Nickels was nominated for a Lambda Literary Award and a Hugo Award for his book, Two Novellas. He was awarded the Philadelphia AIA Lewis Mumford Architecture Journalism Award in 2005 for his book Philadelphia Architecture and his weekly architectural columns in Philadelphia Metro. He has written feature stories, celebrity interviews, and social commentary columns for The Philadelphia Inquirer, The Philadelphia Daily News, the Philadelphia Bulletin, City Paper, The Philadelphia Weekly, The Philadelphia Gay News and The New Oxford Review. His travel essays have appeared in Passport Magazine.  His column, Different Strokes in the Philadelphia Welcomat in the early 1980s, was one of the first out lgbt columns in a mainstream newspaper. He’s currently the architectural writer/critic columnist and feature writer for ICON Magazine (New Hope, PA), a contributing editor at Philadelphia’s Weekly Press, and a weekly columnist for Philadelphia’s STAR publications. Mr. Nickels also writes for the Broad Street Review and The Gay and Lesbian Review. His novel SPORE was published in July 2010. His novella Walking Water & After All This (1989)-- is currently available on Amazon and will be a paperback later this year He is listed in Who’s Who in America, 2003, 2004, 2005, 2006, 2007, 2008, 2009.  You  can visit Nickel's webcast here.