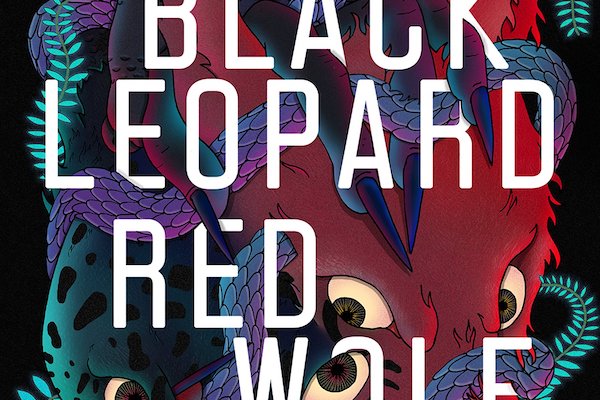 Full of violence, suspense, and mystery, Black Leopard, Red Wolf is a daring exploration of what it means to find love and a sense of purpose in an unstable world where truth is “a shifting, slithering thing.” Taking place in a fictional continent based on Iron Age Africa, Jamaican author Marlon James’s latest novel hybridizes fantasy, historical fiction, and epic. This colossal, six-part tale charts the adventures of an unforgettable pair of mercenaries as they hunt for a lost boy.

The novel starts with a blunt declaration: “The child is dead. There is nothing left to know.” Tracker, the combative protagonist/narrator, finds himself imprisoned in a foreign kingdom. An ineffectual Inquisitor is attempting to uncover the circumstances of the missing boy’s death. “Make record as I have said it,” Tracker snaps. This interaction begins a hallucinatory collection of interlocked stories that recount not just the hero’s quest to find the boy but also his coming of age, lineage, romances, and more.

In terse but intricately constructed prose, Tracker, or “Red Wolf,” first recollects his background. He hails from Ku, a minor river tribe in conflict with the neighboring Gangatom, and he has been blessed with an extraordinary sense of smell that allows him to track or hunt anyone, hence his pair of names. While some have accepted James’s marketing of his work as an ‘African Game of Thrones,’ the novel’s superhuman characters and frenetic pacing bring it far closer to the realm of comics.

Early on, Tracker subverts his destiny. The ghost of his father demands his son avenge his wrongful death at the hands of Gangatom, but Tracker grows weary of cyclical violence. Tracker abandons that quest, and he lives in an enchanted forest with a Gangatom witch. Here, he helps raise Mingi children, “[c]hildren born weak, or limbless, or with top teeth before bottom, or with gifts or forms strange.” The parallels to X-Men are clear.

As a man who loves men, who feels “both man and woman,” Tracker identifies with the marginalized Mingi. In the forest, he grows to care for children such as “Smoke Girl” and “Giraffe Boy,” and he meets and finds himself enamored with the titular Leopard, a sly shapeshifter whose self-control contrasts Tracker’s impulsivity. The halcyon days are short-lived. Disaster forces Tracker, Leopard, and the Mingi to separate, but the hero’s ongoing relationships with his would-be lover and adopted children form the emotional arc of the novel.

When Tracker and Leopard reunite years later, Leopard informs him that a slave master has “commissioned nine” mercenaries, including Tracker, to hunt down “his child, his little fly,” who inexplicably has disappeared. Among them are a garrulous giant, a mysterious witch, and an inarticulate river spirit; far from a tight-knit fellowship, they soon split up into antagonistic groups. As Tracker’s clan treks across bleak deserts, towns made of mud and stone, and a city in the sky, they encounter fairies, magicians, cannibals, lightning birds, and sadistic rulers.

The boy’s identity remains shrouded in mystery. Near the novel’s midpoint, Tracker complains that he has been told “five stories so far of who this child is,” and not until the lurid ending does everything click together. The intricacy of the meandering main storyline demands an engaged, careful reading, even as the author prioritizes character, language, and theme over plot.

At the core of James’s project are several existential questions that are recited like incantations across the novel’s twenty-five chapters. “What is man, and what is woman?” “What kind of testimony is this?” “Have you a stake in anything? In anyone?” As blood-soaked as the story is, the novel explores these big ideas with great subtlety. Again and again, Tracker and others reflect on what it means to build a life worth living, tell a story, and nurture a loving relationship in a patriarchal world defined by arbitrary violence and a lack of stable facts.

Rich in allusions to sources as diverse as African myth and Gabriel García Márquez, the novel mercilessly parodies the conventions of fantasy. Sardonically named landmarks like “the Bridge That Has a Name Not Even the Old Know” emerge regularly throughout the novel, and Tracker repeatedly mocks the idea that “the fates of princes and kings [. . .] changes anything that happens to us.” The story deconstructs the idealized hero’s quest of Lord of the Rings as much as it does the militaristic court dramas of Game of Thrones.

Far from an epic tale about battling kingdoms, Black Leopard, Red Wolf offers a nuanced portrayal of the intimate bond between the two eponymous Black heroes as they struggle to survive, communicate, and love in an era beset by armed conflict. As the first installment in James’s The Dark Star Trilogy, it successfully introduces readers to a civilization in crisis, populated by troubled mercenaries, unforgiving elites, and fantastical creatures. The novel is inexpressibly compelling, and the trilogy seems sure to become a genre-bending classic.

'The Wedding Heard ’Round the World: America’s First Gay Marriage' by Michael McConnell with Jack Ba...
Tom Spanbauer: Truth Through Fiction
“Yes, I Really Am This Vulnerable”: 'Unthinkable Creatures' has Heart