Keeping Up with the Gays of DC and Marvel : New York Comic Con

Keeping Up with the Gays of DC and Marvel : New York Comic Con 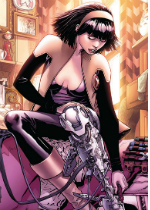 Comic book and graphic novel fans are taking to the streets this weekend for New York’s annual Comic Con festival. Over the past decade comic books have introduced an increasing number openly gay and lesbian characters, including Batwoman (Kathy Kane), the Green Lantern (Alan Scott), the Avenger’s Lightspeed (Julie Power), and many many more. Check out a few favorites from “the world of gay super heroes,” along with some spoilers, in OUT.

Iconic artist and performer Patti Smith recently chatted with EW about the screenplay adaptation of her 2010 bestselling memoir Just Kids, voicing that she could see Twilight stars Kristen Stewart and Rob Pattinson playing her and Robbert Mapplethorne in the film.

Smith, a self-professed movies fan, also said that writing the screenplay was harder to do with her packed touring schedule behind her newest album Banga, but that anyone who snags the coveted roles of her and Mapplethorpe have to be unknown names…

As for newer actresses she loves, besides Stewart?

See more of what Smith had to say here.

On Wednesday one of the three Pussy Riot band members, Yekaterina Samutsevich, had her two-year sentence suspended by the Moscow City Court. BBC reports that the release was issued after Samutsevich’s lawyer argued that she “had been thrown out of the cathedral by guards before she could remove her guitar from its case for the band’s punk prayer.” The other two band members, Nadezhda Tolokonnikova and Maria Alyokhina, will serve the two year sentence. [Velvetpark]

This week the National Book Foundation announced the 2012 National Book Award Finalists. Among the many finalists are authors Junot Díaz (Fiction), Dave Eggers (Fiction), Katherine Boo (Nonfiction), David Ferry (Poetry), and queer author Eliot Schrefer (YA). A congratulations goes out to all of this year’s authors. See the full list of finalists here.

Ayana Mathis: The Power of the Tribe
In the News: James Baldwin, Wayne Koestenbaum, and Comic-Con 2011
The Banal and the Profane: Frederick Smith

Paige Cohen is a graduate of The New School M.F.A. program. Her writing appears or is forthcoming in PANK Magazine, Berfrois Magazine, Gertrude, BuzzFeed LGBT, T(OUR) Magazine, and Writer's Bloq Quarterly. Her short films have been featured in the San Francisco Frameline, New York NewFest, and Salem Film Festivals. She currently lives in New York City.