‘Did You Ever Have a Family’ by Bill Clegg

‘Did You Ever Have a Family’ by Bill Clegg 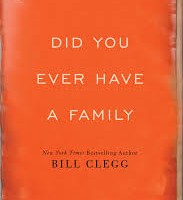 It was June’s hand, sending her away, the first signal that everything was about to change, had already changed, and that she was about to find out how. Those flickering, flapping fingers still jump before her eyes like a black flag snapping in the wind, commemorating all that was over.

–Bill Clegg, Did You Ever Have a Family

How do you write about the incomprehensible? How do you begin to talk about not only the event of a tragedy itself, but everything that comes with it? The answer, posits Clegg in his novel Did You Ever Have a Family, is slowly. Methodically. Taking stock of everyone affected, and allowing them to have a voice.

In this novel, fifty year old June Reid is faced with the irreconcilable deaths of every person in her family—a fate she was spared from by pure happenstance. Her daughter (with whom she was beginning to reconnect with), her daughter’s fiancée, her ex-husband, and her current boyfriend are all killed in a freak gas explosion in a small town in Connecticut, and June must not only navigate their absences, but also an identity bereft of family.

The book is riveting and moving, from start to finish. With each chapter written from a different character’s point of view (much like Faulkner’s As I Lay Dying or The Sound and the Fury), readers get the opportunity to view not only the insularity of June’s grief, but also the web of connectivity forged by human relationships. Spanning from East Coast to West, the novel covers not only June’s journey, but the journeys of the people touched by those killed, including the separate families of each person lost.

Clegg does justice to trauma and grief by structuring his novel this way; the reader is allowed to be lead through the experience of a community afflicted with tragedy, in all of the manifestations possible. Using craft elements such as fragmentation, split-perspective, objectivity, epistolary writing, and even dream landscapes; Clegg is able to juggle multiple characters as well as the nuances of joy and grief. The skill is not lost on the reader—whether it is through the letter June finds from her daughter (a letter that was never intended for her to read), or the loneliness of June’s boyfriend’s mother Lydia (and her long-distance relationship/vulnerability to a money scammer whom she knows only through his persistent calls)– we are offered heartbreaking looks into the smaller mosaic-pieces of trauma, instead of just the big-picture.

Beautifully rendered, Did You Ever Have a Family has achieved greatness in a subject that deserves to be treated with greatness.

'Ill Will' by JM Redmann
'Trans' by Juliet Jacques
'Playing by the Book' by S. Chris Shirley