Life Comes for the Normal Teacher

Normal Miguel (Cheyenne), with a beautiful cover by fellow romance writer Alex Beecroft, is the story of a year in the life of Miguel Hernández, a young normal school teacher in a small, rural village in Puebla, Mexico.

Orrantia tells his story in a simple lyrical style that reveals the character and deepening maturity of Miguel through a series of episodes in his life.  The book’s style is like magical realism without the intrusion of the mystical; the magic instead comes from the simplicity and ordinariness of Miguel’s life in the village of Comalticán.

What is most charming about Miguel is his utter normalness as he grows in awareness of himself and his true vocation in life through his relationship with his students, the school’s stern but sympathetic Directora, and Ruben, the village confectioner.

Fresh off the bus from teacher’s college in Mexico City, the young and inexperienced Miguel meets Sandra Zaragoza, the rural Internado’s Directora:

She looked up from her business. Her face was brown and the vertical lines between her eyebrows gave her a serious expression; she was the kind of woman that could not be deceived. Her lips were closed tight and her black hair was graying. She looked as if she had worked her way up in the school system and took her job with utmost gravity. Miguel awaited a response from her and swallowed nervously. She reminded him of his mother. But then her head tilted and her lips parted to reveal the most welcoming of smiles. 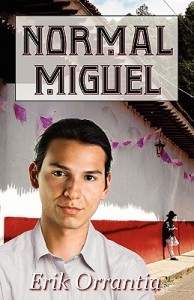 Despite perceptive advice from the Directora to keep his attention on his young charges, Miguel soon finds himself seduced by the crude but handsome school baker simply known as the Captain, who has enjoyed his share of freshmen teachers in the past: “All you Mexico City boys like that, don’t you?”

But Miguel is saved from a disillusioning debauchery by a chance comment he overhears from one of his students:

He’s the best teacher I ever had…He tries really hard to teach us stuff and does it in funny ways…And you can tell that he likes us. He makes me want to learn.

He literally learns to love his students, warts and all.  Even two of the older students who make knowing comments about Miguel’s sexuality show a growing respect for their young teacher.

When Miguel takes his students on an outing to view the landmark cross atop a local hillside he decides to treat them with sweets if they make it all the way up the mountain.  He visits the candy story in the local town of Arbolito and briefly meets Ruben, the young confectioner, who knowingly says, “Tell the Captain I sent my greetings,” and asks Miguel to come back again.

The two meet again at the shop under the watchful eye of the town gossip, the comical, Doña Conchita.  Ruben invites Miguel for a lovely idyll on horseback along the local river.

On their return, Ruben sits Miguel in front of him on Micha, the horse:

’You have to show the horse who is in charge,’ he said. But Miguel could hardly concentrate as he felt Ruben’s arms firmly wrapped around his waist and his body pressed against his back.

The two eventually become lovers, despite the jealousy of the Captain and the inevitable small town gossip.  Miguel continues to struggle to bring his students along despite their frequent obstinacy and dullness.

Frustrated by their lackluster academic results and lonely for Ruben who is unexpectedly absent, Miguel succumbs to the temptation to visit Tomas, a student’s father who is on the down low, for a weekend of relief.

After missing school on Monday he is suspended by the Directora and eventually learns a hard lesson about true love.  Miguel and Ruben’s reconciliation culminates in an impromptu “wedding” staged by some of Miguel’s students and presided over by the Directora that is at once comical and solemn.  Yet, Miguel still has to make a decision about who he is and where is his true home.

Miguel finds his life through living it.  The villagers of Comalticán, the beauty of the Puebla mountains, the love of his students, the understanding of the Directora and, finally, Ruben, all form the landscape of his charming journey of self-discovery.  It is a journey well worth taking.

Counterpoint: Dylan’s Story (Dreamspinner) is a marvelous Victorian Valentine that evokes Dickens, Les Misérables, and The Ballad of Reading Gaol while wisely not attempting to imitate any of them.  Sims instead chooses to tell the story of the young English composer, Dylan Rutledge, in an excitingly melodramatic style that is by definition correct for her subject—a 19th century drama set to music. 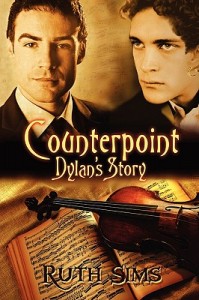 The story opens with our romantic hero, Dylan Rutledge, a headstrong, musical prodigy in love with his public school master, Laurence Northcliff.  His impulsiveness gets him suspended from school, but his musical genius gets him restored.  But while being privately tutored by Laurence, the boy’s impulsiveness once more leads to disaster:

’You treat me like a child, too ignorant to know what he wants. Well, this is what I want.’ Clumsy, quick, and passionate—he kissed Laurence. Laurence’s body responded. His mouth and his soul opened. It lasted but a moment. He broke the kiss, gasping, and violently shoved Dylan away. ‘In the name of God, what do you think you’re doing?’ ‘You want it too!’ Dylan cried.

The problem is, of course, he does, and so, in good conscience, Laurence must flee to Paris to pursue the life of a garret novelist and escape the seduction of his underage student.  Soon enough, Dylan finds himself in Paris on Grand Tour with his school chum with benefits, Rob Colfax.

Now of age, he reunites with Laurence and decides to abandon his father’s plans for him of university and the bar, to devote himself to his music and to Laurence.  While in Paris, Dylan becomes acquainted with the world-renowned violinist Adler Schonberg and meets and feels an immediate dislike for Schonberg’s student and companion, the strikingly handsome and brilliantly talented gypsy boy, Geoffrey Dohnányi.

While Laurence reaches his zenith of renown as a novelist, Dylan’s avant-garde compositions do not find acceptance either among musical critics or the public.

After a tragic accident, Dylan finds himself once more in England, disowned by his family and nearly penniless.  As he struggles to find himself both musically and professionally, Dylan becomes reacquainted with Dohnányi and the critically ill Schonberg.

Despite Geoffrey’s devotion, when the elderly Schonberg dies, his (marvelously written) wicked brother and sister-in-law swoop in to try to rob Dohnányi of Schonberg’s inheritance—a priceless Stradivarius violin—and to have Geoffrey falsely imprisoned.

Meanwhile, Dylan has fallen in love with the darkly handsome gypsy.  Dylan enlists the aid of now married with children, Rob, and Laurence’s old friend, the fabulously wealthy and beautiful arts patron, Ivy Daumier, to free Geoffrey.  Dylan composes his most brilliant masterpiece for Dohnányi, but will the broken man be able to play it?

Sims’ plot-driven and suspenseful page-turner is particularly heart-rending in the second half as Geoffrey languishes in prison.  Dramatic plot twists are introduced with a Dickensian deftness that allows readers to satisfyingly suspend their disbelief.

My only small complaint is that I wanted to see more of Schonberg’s wicked brother and sister-in-law’s come-uppance.  These two arch-villains are truly worthy of a “Bleak House.”

Sims beautifully paints both the high-church Anglican Venerable Bede School for Young Gentlemen and the Paris of la belle époque.  Her secondary characters, like Ivy Daumier, are full-blooded and delightful when they visit the page, adding to but never distracting from the main plot line.

A story that could have become over heavy is lightened by Sim’s frequent humor.  When Northcliff persuades the head of Bede’s to reinstate Dylan, the old man protests:

’I would rather appear naked before the Queen!’ “No doubt,’ Laurence said. ‘But she is a very busy lady with an empire to see to. You’ll have to make do with talking to Rutledge.’

Most impressive is Sims’ ability to evoke the aural image of the music she is describing.  When Geoffrey plays Dylan’s concerto, St. Joan, she writes:

The emotions brought forth by Geoffrey’s playing were unlike anything Dylan had ever experienced except in his mind and he had composed it. This was the pure simplicity of the peasant girl who led an army. It was the horror of her execution by fire, and the ethereal voices of the other martyrs as they welcomed Joan’s soul. This was the way he had heard it in his mind and heart, brought to life.

Sim’s brings to her satisfying entertainment serious themes about art and the modern situation of the Romani in France.  While Laurence points out that Dylan’s music “is the equivalent of Impressionism.  Different with a different message for each person who hears it,” Dylan is furious when Geoffrey dares to alter one of his themes in his interpretation of it.

Dylan insists, “It’s the artist’s place to accommodate himself to the music, not vice versa.”  But in the end it is the synergy, or immersion of artist into art, of Geoffrey into Dylan, that brings about his masterpiece.  When Sims touches upon the historic discrimination and persecution unjustly suffered by the Romani people in Europe, one immediately thinks of the recent expulsions of the Romani from France.

Sims does much to right the bigoted stereotypes about this noble and proud people through her portrayal of Geoffrey Dohnányi, son of a Gypsy king.

'Imperial Bedrooms' by Brett Easton Ellis
'Ivan and Misha' by Michael Alenyikov
Alex Dimitrov, "You Are The Party I Want To Go To"

Dick Smart (dicksmartlv@yahoo.com) writes and loves in Las Vegas. When not daydreaming, he is hard at work on his first romance novel.