‘The End of Your Life Book Club’ by Will Schwalbe

‘The End of Your Life Book Club’ by Will Schwalbe 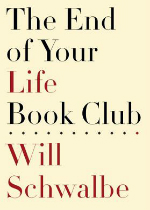 Will Schwalbe has accomplished something incredible with The End of Your Life Book Club. He’s created a touching memoir that simultaneously provides an accounting of a bittersweet period of his life and celebrates the life-long good works of his amazing mother.

The setup is clear so that you know from the first chapter how the book will end. Schwalbe’s mother, Mary Anne, is diagnosed with pancreatic cancer and, as a devoted son, he decides to attend her chemotherapy sessions at the hospital with her. They have often shared books in the past and since they will be spending hours together each week, it seems natural to form a two-person book club to chat about the books they plan to read together.

Schwalbe’s career as a publisher is summarized as stressful and often unsatisfying. But this memoir isn’t about Schwalbe as much as it is about the relationship he has established with his mother through their discussions about their readings.

Schwalbe’s devotion to his mother, Mary Anne, is clear but it soon becomes obvious that his mother has led a fulfilling life of organizing various international educational and rescue organizations. Over the years she has developed significant relationships with friends, co-workers, and students at church, at Harvard (where she was a director of admissions), and at private schools where she has worked. She has also travelled extensively as part of her world-wide charity work and organizing.

Throughout the book, Schwalbe divides the time spent with his mother between the hours spent undergoing chemotherapy at the hospital as her health slowly declines and the public accolades and private acknowledgements that his mother receives during her final years.

The books that they discuss range from best sellers (including The Girl with the Dragon Tattoo by Stieg Larsson), to classic novels (Appointment in Samara by John O’Hara and The Painted Veil by Somerset Maugham), and lesser known memoirs (The Bite of the Mango by Mariatu Kamara from Sierra Leone). Many of the books reflect Mary Anne’s interest in developing countries (such as The Lizard Cage by Karen Connelly, which takes place in Burma) and the Middle East (such as The Reluctant Fundamentalist by Mohsin Hamid, which takes place in Pakistan after 9/11).

It seems predictable that some of the book club titles deal with death (Gilead by Marilynne Robinson , The Last Lecture by Randy Pausch, and The Year of Magical Thinking by Joan Didion), and that these titles offer the most valuable conversations between mother and son.

Mary Anne is much more religious than her son. Schwalbe treats his mother’s religious reading (including Daily Strength for Daily Needs, which was originally published in 1884 by Mary Wilder Tileston) with dignity, recognizing that much of what she accomplished has been motivated by her religious beliefs.

The gay content in The End of Your Life Book Club is slight but Schwalbe infuses the book with a gay sensibility. Schwalbe mentions his coming out to his parents and his partner, as well as the novels they have read over the years with gay content. Schwalbe treats his lesbian sister and his non-gay brother—both of whom have partners and several children who are very important to his mother—equally. If anyone seems missing in this memoir, it is Schwalbe’s father, who is only a very minor character until the end of the book.

For some time, a death in gay memoir was often from AIDS and the stories were tributes to partners who died before their time without the support of their families. As gay men and lesbians are accepted and integrated into their families, this is a new kind of gay memoir, where a gay man takes care of his dying parent. It is a satisfying change and in this case highlights the closeness that gay men often have with their mothers, a topic that is examined in the book.

The quiet pleasure that The End of Your Life Book Club brings is a tribute to Schwalbe’s writing and the memory of his mother. This dual memoir/tribute guarantees that we will recognize him as a loving eulogist and that we will remember his mother as strong woman who lived a valuable life worth commemorating.

Howard G. Williams is a coordinator of The Pat Parker/Vito Russo Library Book Group and the chairperson of the long-running Second Tuesday Lecture Series, both at The LGBT Center in New York City. See www.HowardWill.com and www.SecondTuesday.org for more information.