‘Live Through This: Surviving the Intersections of Sexuality, God, and Race’ by Clay Cane

‘Live Through This: Surviving the Intersections of Sexuality, God, and Race’ by Clay Cane 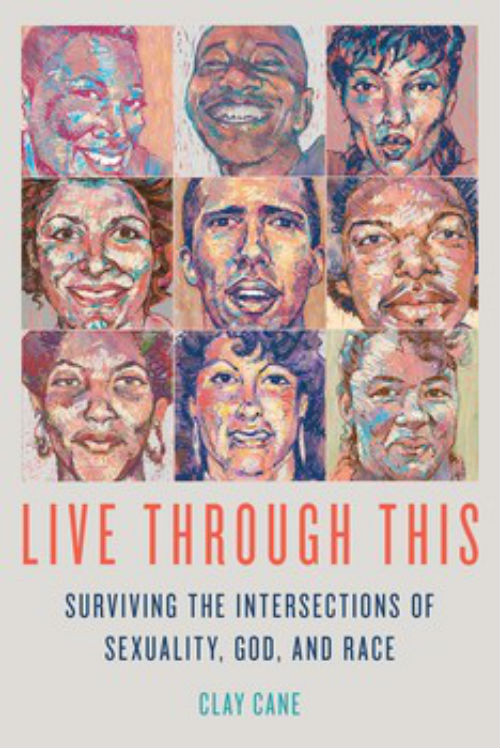 In 1991, filmmaker, educator, and gay rights activist Marlon Riggs told Outlook magazine: “When the existing history and culture do not acknowledge and address you—do not see or talk to you— you must write a new history, shape a new culture that will.” He called for Black lesbian and gay writers to reclaim their power and identities.

In the collection of personal essays, Live Through This: Surviving the Intersections of Sexuality, God, and Race, Clay Cane, a self-identified gay Black man, accepted Riggs’ provocation. His use of personal narrative as a means of defining his own personhood guides readers on a dizzying journey–replete with love, pain, loss, and violence–to attune, as Cane writes, “the past and the present…experiences [that] not only form who we are: they shape our fears and burdens.”

But what do we make of the lived experiences that ostensibly shape us? How do we navigate the identities mapped onto our bodies by society vis-à-vis the ones we forge for ourselves? Clay Cane attempted to resolve these questions by exploring selfhood through the lens of race, class, sexuality, gender, and spirituality in America, carving out space for himself to lay claim to the power of his own identity.

The book’s cover art is a portrait of Cane surrounded by a mixed hue of nameless faces. It can be interpreted as a modicum of people central to shaping him into the person he would become. One such person credited in the preface of the book is his mother, whose undying love for her only child gave him the tools for “surviving and thriving” in the streets of Washington State, West Philadelphia, and New York City. Cane’s recollection of his mother’s steadfast affirmation is witnessed throughout the book’s five sections of essays (Sexuality, Love, Race, God, and Intersections). However, Cane’s other memories in the book, where “not being seen or heard (not being loved),” offers a telling entry point into his search for identity and self-acceptance.

From calling out theological violence in the Black church in the essay “Holler If You Hear Me,” to reckoning with the materiality of poverty in “Your American Life,” to illustrating the disparity between Black and White working-class folk in “The Whole Town is Laughing at Me,” Cane locates the joy among the pain. It is in those moments that we see his humanity, and the humanity of those whose stories he retells.

Through these narratives, readers come to know the people he encounters along his journey–from his childhood best friend Nikki to transgender sex workers in West Philly, who, like Cane, face similar struggles living on the fringes of American society. And while women in his life hold precedent, it is the essay “Killing My Father”–the only time he writes of him in length–where we witness the culminating moment for a “Black gay and beyond effeminate” Cane contending with the performance of masculinity (and a distant father).

Cane describes the essays of Live Through This as “a fusion of the humorous, campy, disturbing, heartbreaking, and inspirational.” The subtitle of the book–Surviving the Intersections of Sexuality, God, and Race–is therefore a little misleading. Such a cerebral impression may signal to a prospective reader that the book holds a collection of personal narratives enhanced by a critical cultural analysis. Cane, currently a journalist and television personality, does carefully adopt the lexicon often found in social science’s theoretical frameworks, yet does little to analytically engage the terms and theories with the narratives he put forth. Paradoxically, this works in Cane’s favor: it makes the book unexpectedly accessible and relevant.

As armchair cultural critique has increasingly become commonplace in public dialogue, Cane’s exploration of identity is a heartfelt and earnest product of its time. He weaves together an intricate coming-of-age story, delving into troubling themes such as sexual violence, racism, and poverty.

Yet, Cane keeps a sense of vulnerability and candor as he allows readers a glimpse into his world. Rightfully cathartic, Clay Cane’s Live Through This recalls Marlon Riggs’ overture: it serves as a memorialization for those Black and Brown queer bodies that are often not seen or heard. It is a collection of many untold stories that need to be told.

'Collateral Light' by Julia Cohen
'Moving Politics: Emotion and ACT UP’s Fight Against AIDS' by Deborah B. Gould
‘Why Be Happy When You Could Be Normal?’ by Jeanette Winterson