‘The Clancys of Queens’ by Tara Clancy

‘The Clancys of Queens’ by Tara Clancy 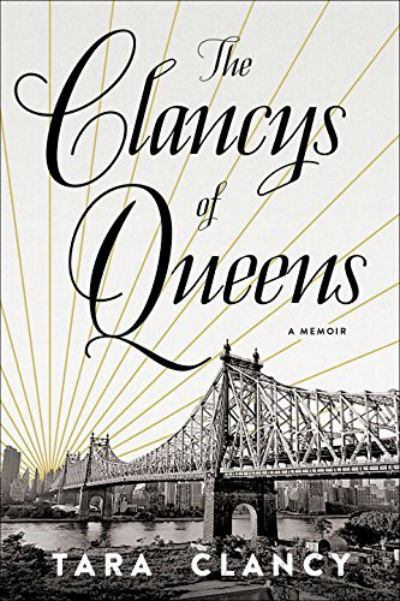 When Tara Clancy’s parents divorced her world was not cleft in two, it was divided into three highly disparate parts. Her father’s place was a one-room converted boathouse in a down and out corner of Queens. The story opens with a young Tara scrapping with neighborhood boys while wearing her dad’s weighted boxing gloves and nearly knocking her own block off. From there she might go to her mother’s place, from which she’d be dropped off into a Brooklyn complex full of Italian grandparents and great aunts and uncles, worth reading about for the cursing alone. But every other weekend a limo would slide up and carry her to her mother’s boyfriend’s place, an estate in the Hamptons complete with a man-made lagoon. The Clancys of Queens is a family story that takes an unfiltered look at class differences. It’s also hilarious, inspiring, and that rarest of animals–a memoir full of honest good cheer.

Clancy has told stories on The Moth Radio Hour and in other venues, and she writes with the confidence of a practiced raconteur. One of the rituals she shared with her grandmother was saving old greeting cards to eventually tear in half and use to collect floor sweepings. “The whole scene strikes me now as some tough-ass urban women’s version of elder tribal ladies teaching the wee ones to work a loom: You see, my dear grandchild, now you’re learning the age-old tradition of our people saving two bucks on a dustpan.”

Young Tara is unfazed by the contrast in the worlds she inhabits, sliding from nights out at the local bar with her dad to late-night philosophical chats with Mark in the Hamptons. She’s a rule-breaker in school until her teens, when her natural intelligence runs headlong into the works of William Shakespeare and something clicks. It’s not long before she’s pulled a neat one-eighty from near dropout to making the dean’s list.

It’s mentioned in her bio that Clancy “now lives in Manhattan with her wife and two sons.” Sexuality doesn’t figure into this story as a Big Deal, though it does pop up. Some of her father’s friends from the bar were gay, and her mother had one lesbian friend in college. She brings Tara to visit that friend in hopes that her daughter will figure out what she suspects is the case. This turns into a story too good to spoil here. When she’s able to come out to her mother, it’s a vindication of her suspicions; her dad has a slightly harder time accepting the news but comes around with admirable speed.

Reading The Clancys of Queens saddled me with a wicked earworm that at first was hard to place, though it was definitely music featured in a cartoon. A Hare Grows in Manhattan is the story of Bugs Bunny’s path from working-class rabbit to stardom, and the song he sings while tap-dancing down the street in a straw boater is “The Daughter of Rosie O’Grady.” Throughout the story, Bugs is set upon by dogs who he outwits through repeated self-invention, ultimately sending them running when he holds up a copy of A Tree Grows in Brooklyn. The affection for local landmarks and each borough’s quirks, improvisation to suit whatever situation life is dealing out, and a sense that even the biggest threats can ultimately be overcome all permeate this story as well. Clancy’s is not a cartoonish life, but one that’s exceptional in its realness and resilience, and tremendous in the telling.

Heather Seggel's work has appeared on 'The Toast,' in 'Bitch' magazine, at WashingtonPost.com, and many other venues. She is loosely based in Northern California while trying to find her forever home.