Listen to the 2006 Jane Rule Interview with Women-Stirred Radio

Listen to the 2006 Jane Rule Interview with Women-Stirred Radio 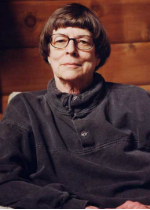 “…THE FIRST FAN MAIL I HAD WAS ALMOST ALWAYS FROM PEOPLE WHO FELT VERY ISOLATED AND VERY UNKNOWN…AS THE YEARS WENT ON I MUCH MORE OFTEN GOT RATHER JOYFUL LETTERS SAYING THANK YOU FOR ALL THE WORK YOU’VE DONE AND HOW MUCH EASIER YOU’VE MADE MY LIFE.”

Author Jane Rule is best known for her 1965 debut novel Desert of the Heart, one of the first hardcover books to explore and depict a happy, fulfilling lesbian relationship during a time when the majority of lesbian fiction was published in pulp paperbacks. Following the ground-breaking novel, Rule published and wrote a number of novels, essays, and short stories including: Lesbian Images, This is Not for You, Outlander, and Hot-Eyed Moderate, among many others. Rule passed away at the age of 76 on November 28, 2007.

…an extraordinary writer gifted with clarity, compassion, and humor…Rule writes about a world of diversity and the seemingly small acts of courage that speak volumes to the quiet, persistent struggle of all people to understand their world and to share that understanding with others.

In her 2006 interview with Women-Stirred Radio‘s Merry Gangemi, Rule talks about her work as a writer, the effects of that work on a larger audience, the film adaptation of Desert of the Heart, motherhood (which often appears as a theme in her work), teaching, art, loneliness, and much more, in the eloquent and charming voice that graces so much of her work. Listen to the interview here:
Jane Rule Interview

Ryan La Sala on Being a Menace to Reality
Oscar Wilde is Still Alive! The Best Books About Oscar Wilde
Penny Arcade: 'An Old Queen's Tale'

Paige Cohen is a graduate of The New School M.F.A. program. Her writing appears or is forthcoming in PANK Magazine, Berfrois Magazine, Gertrude, BuzzFeed LGBT, T(OUR) Magazine, and Writer's Bloq Quarterly. Her short films have been featured in the San Francisco Frameline, New York NewFest, and Salem Film Festivals. She currently lives in New York City.