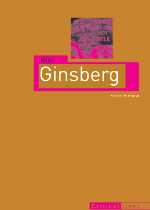 I have heard rumors, lately, of a poet once of the City of New York named Ahron Grinsberg, no wait, that’s my building manager, let’s see, yes, here: Allen Ginsberg. He seemed to have had a faint few followers when he resided in the formerly seedy East Village.

Known as I am for championing overlooked artists, I sprang to action to review this biography of said Charlotte Gainesborough, no, wait, I’ll get it yet, ALLEN GINSBERG.  Written by versatile artist, poet, and Englishman, Steve Finbow, Allen Ginsberg (Reaktion Books) offers verse hobbyists and stanza scholars alike a chance to finally encounter this hitherto unknown poet. Though, nary a complete poem is included. I have NO IDEA where you can find  poems by said Ginsberg but trust you will be intrepid, dear reader. Oh: I must reveal that Finbow selected and beautifully illustrated four of my poems for his poetry blog, Red Peter, a few years ago.  He worked for Allen for a time, and so was able to draw on observation as well as copious research.

It turns out Ginsberg was born west of the Hudson River, and therefore no one has been able to ascertain the exact state of his nascence.  New Jersey governor, Chris Christy, was not available for comment. Ginsberg was a Buddhist, although I gather his parents chose a different path. Okay, so he came from a complicated yet pretty supportive family, as such things go in the lives of artists, his schizophrenic mother being the beautifully painful loadstone that mothers can be. Allen attended Columbia, worked in a library to save for college—his family was by no means wealthy—and once in (and out of and back in) school, kept working.

He fell in with one—wait, let me be sure I get this right, here it is—Jack Kerouac, another of the lost boys of American literature whose reputation might gain some traction if this biography is read. Allen fell in love with a goodly number of folk of manly persuasion, suffering from that peculiar hollowness that makes people go for the unattainable (in his case, straight men). However, he found a lifemate in Peter Orlovsky, as complicated a soul as any I’ve read about.

As this book reflects with its nonstop pace, Allen’s life was one of near nonstop action.  Might be poetry, might be drugs, might be sex, might be friends and new friends, jaunts around the country to be with friends in all the ways one can be with friends, and later around the country and world on speaking tours.  There was poetry, political action, and attempts to levitate the Pentagon. There was desire for fame, not unbecoming, just there. Whatever his desires and demons, Allen acted on them and believed in impulse—personal freedom and political responsibility. If he did it, so should anyone else feel free to do it, and in his life and politicking he pressed for freedom to do (write without fear of censorship) (couple hither and yon) (mess with psychedelics) and be (queer and a queer writer) (against the war or nukes or other forms of hatred, fear, confinement).

What is especially useful about this biography is Finbow’s sharp insight and analysis of  one of the American icons of the last century. (Okay. There I’ve said it.) He doesn’t make claims for Ginsberg being the best poet. But by Allen being nonstop Allen—with the fact of his innate warmth and hyperkinetic life—Ginsberg avoided the trap of some reputation-driven poets who also push for fame and power but do so within smaller, static groups. Many poets want to be Allen Ginsberg, but of course that’s been done, though at some cost, with Allen “. . .appropriating the role of ‘Allen Ginsberg’. . .”

Finbow writes, “From as far back as 1955, Allen had known that his poems could be overly self-referential and egotistical.” Referring to a quote from the inimitable Eileen Myles, Finbow writes, “Allen had become that cyborg-double – Ginsberg – that simulacra materialized out of his own mediatized autobiography; driven by his constant search for a sexual partner, he had wired into the spiritual unconscious while seeking human touch.” The enchanting Anne Waldman once introduced him as a poet of “postwar materialist paranoid doldrums.”

Of course Allen lived in Eisenhower’s, Nixon’s, Reagan’s & co.’s sassy, split America, which concocted a different set design than did the dictatorships which poets such as Akhmatova, Borges, Szymborska lived under. That can be frustrating for a poet with ambition, that she or he doesn’t have the kickstart of sheer national terror. But you do what you can with what you have.

Allen often had financial and health troubles. The former kept him on-the-go, in spite of the latter. Finbow is successful at elucidating public and private Allen, as he was, and cutting through the reverence, not to hurt the poet’s reputation, but to keep it real. “He would try to attend any symposium, conference, even lecture, that discussed his work.  Although lured by the attention, he loathed negative criticism of his work, proclaiming that the critics did not know what they were talking about, that they had misunderstood his motives, his sources, his theories.”

Having lived among devotees of St. Allen since I moved here (seriously, before I came to New York, Ginsberg was, to me, a poet of three wonderful poems, the end), I worked against type to review this book. I was won over, although I’m still not sure to what.  Maybe it was the 28 illustrations, maybe it was the author’s even-handedness.  Maybe it’s just that I’m from Los Angeles and have shopped more than once in a supermarket of California.

Sarah Sarai is author of three books of poetry: That Strapless Bra in Heaven (Kelsay Books, 2019), Geographies of Soul and Taffeta (Indolent Books, 2016), and The Future Is Happy (BlazeVOX, 2009). Her fiction is in Callisto, Grist, Fairy Tale Review, and others; her reviews in Lambda, The Gay & Lesbian Review, and others. She holds an MFA from Sarah Lawrence College. Twitter @sarahsarai; Facebook/Instagram: @farstargirl