‘Why Dust Shall Never Settle Upon This Soul’ by Ryka Aoki

‘Why Dust Shall Never Settle Upon This Soul’ by Ryka Aoki 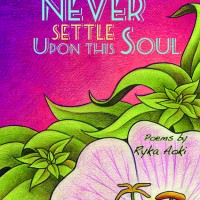 Following up her 2014 novel, He Mele A Hilo, Why Dust Shall Never Settle Upon This Soul is Ryka Aoki’s first book dedicated completely to poetry. It collects her 2010 chapbook sequence about Los Angeles, Sometimes Too Hot The Eye Of Heaven Shines, and an older long poem, “No More Hiroshimas,” together with three new poetic sequences. Whilst it is wonderful to have Sometimes Too Hot… and “No More Hiroshimas” more readily accessible than they have been, it is the new work that chiefly makes this book important.

The three new sequences share a broad topic: the losses trans people make themselves out of, or rather the losses one particular trans woman makes herself out of. The first sequence, “The Woman of Water Dreams” addresses itself satirically and sadly to the phenomenon of the Transgender Day of Remembrance. It measures the loss of life that day is meant to commemorate, but it also asks: what is lost in understanding ourselves, in allowing ourselves to be understood, in terms of loss?

Don’t know
what else I’ve learned,
except we know
a lot of dead people.

The second, “A Song of Someplace Yet to Fall” begins by addressing itself to a different kind of loss, of cis friends and family, unable to deal with the speaker’s transness. More than this though, it sings about the way that, from this point of abandonment, the speaker has been able, no dust settling on her soul, to make herself more than this simple story of hurt, even though the thing she has made of herself continues to be scorned:

Someday my car
won’t pass the smog test.
Just found out I may go blind.
Each day I take five pills
to make me be a little more
like something I can never be.

The third, “After A Lifetime of Saving the World” finally, summoning all the loss considered in the previous two sequences, puts itself forward as a poem of love and domesticity, of refuge, and of the problems and struggles even refuge has:

When I’m writing how even as she ended,
someone always made sure her nails
were absolutely perfect,

who turns off my phone,
closes my laptop, gets a popsicle
to ease my a sore throat?

These poems are brought together by a shared voice, beautifully clear, strikingly individual. It moves across a range of tones. Sometimes it is ruthlessly satirical, acerbically orchestrating the deadening commonplaces of death and loss: “We must remember these/transgenders who simply/wanted be themselves.”

Note “transgenders” as not just a noun but a plural one, the use of a proximal demonstrative adjective “these” instead of the expected distal one (“those”), the tiny pompous implied half-pauses after “these” and “simply”–this is scathingly perceptive observation.

She was satin camisoles,
bedsheet corsets. Flowers, cards,
the hospice lobby for those
too courageous to walk inside.

For combative, look at that damning deployment of “courageous”,  the now-loaded “simple.” For almost despairing, look at the so-precise administration of commas in those last two lines.

This verse is at once emotional and ruthless. And, nevertheless, coherent. What brings it together is its commitment, in all its modes, to richness of detail. This is the gorgeously specified detail of the world, in memory or before your eyes. At the same time, it is the detail of language, the unexpected, brilliantly audible twists of the way this person speaks to you:

I start my Honda,
drive  to my favorite freezer section
soft-shoe past the okra and peas,
waltz by the Breyers
Caramel Praline Crunch.

You miss Chik-Fil-A?
I am my own guilty pleasure.

By now, I was supposed to have
mall-walked to arthritic elder-hood.
Tia Ryka, perched upon padded chair
to speak lovingly

of Arena, Fuck, Fang,
the downtown loft with the best cocaine […]

Of Sin-a-Matic, Illusions,
drag shows at the old Queen Mary.
Cutting lines of hardest house
as the gorgeous ones dance,
or sip vodka tonics,
or give head in lime-green
restroom stalls.

Note, well, I could get carried away, but for one example, those exact line-breaks after “Breyers” or “lime-green.” What passages like these offer is not just an intense recounting of particularity but also a depiction of the intense particularity of that recounting, of that moment of telling. (Or even, in the formidably rhetorically complex occupatio of the second example, of the real telling by a real speaker about a counterfactual telling by a counterfactual speaker.)

It is through this complex grasping, not only of the minutiae of living, but of the minutiae of speaking, that these poems are able to talk about death and loss in the trans community without stooping to pity, without presenting our grief as an item for consumption. The details are heartbreaking, but the voice is unbroken. Similarly, in the other direction, when considering those who have betrayed her, Aoki brings together forgiveness and unforgivingness in a clairvoyance that refuses any kind of commodifiable resolution:

Bless those who
disowned their sons, yet say
they listen to the same
punk rock as they always have.

This is all damning detail, but the ringing “Bless” stands obdurately against it. As a miniature portrait of powerfully conflicted emotions, it could hardly be bettered.

In her foreword to the book, Aoki states:

Unlike the weightiness of essays or prose, poems can be portable, personal
things. Poetry links us not through our shared philosophies or stories, but
through the minutiae of our day-to-day existences.

I don’t know that this is the only thing poetry can ever do, but if this is the task the book sets itself, it succeeds in no uncertain terms. I will be carrying it around in my head for a long time, and anyone interested in trans poetry, or really just in poetry at all, should pick it up too.

Catherine Fitzpatrick co-ordinates the Trans Poets Workshop and is an editor at Topside Press, where her next project is editing the first ever anthology of speculative fiction by transgenderwriters. You can read her poems in venues including Adrienne, Asylum and The Advocate, or on her website, catfitzpatrick.net.