‘When Brooklyn Was Queer’ by Hugh Ryan

‘When Brooklyn Was Queer’ by Hugh Ryan 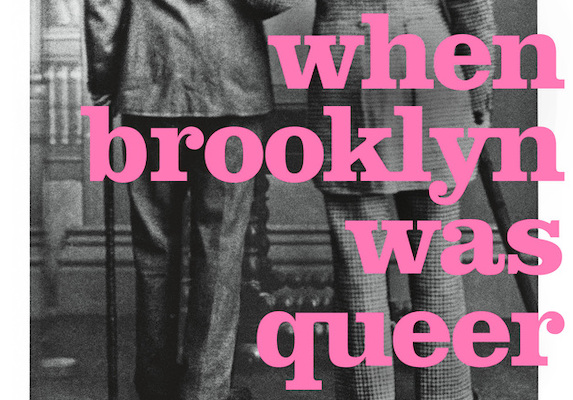 When opening Hugh Ryan’s provocative and fascinating history, When Brooklyn Was Queer, I felt an air of excitement that I hadn’t felt since first reading George Chauncey’s groundbreaking Gay New York: Gender, Urban Culture, and the Making of the Gay Male World, 1890-1940, or Robert Beachy’s subsequent Gay Berlin: Birthplace of a Modern Identity. (Full disclosure, I am a sucker when it comes to gay or queer history, and I’m madly in love with both New York City and Berlin.)

It is also interesting to see a shift from the early gay and lesbian scholarship to a new generation of vibrant queer historical writing. Ryan’s perspective is expansive. He is attuned to issues of queer diversity, as well as to gender, sex, and feminist theory, and he keeps a steady contemporary eye on the flawed narrative assumptions and rush to conclusion that plagued prior historical writings. For example, he immediately points out the paucity of written letters, newspaper articles, archival artifacts, first-hand autobiographical accounts, etc. that were available to document the early queer communities of color. As a result, the early Brooklyn black community of Weeksville proves quite unknowable today. Located in the eastern part of Brooklyn in a discrete area delineated by present-day Troy Avenue, East New York Avenue, Fulton Street, and Ralph Avenue, this forgotten neighborhood was bordered by what is currently Crown Heights, Brownsville, and Bedford Stuyvesant. Ryan writes:

Unfortunately, Weeksville’s history is poorly known. The community was only rediscovered by historians in the 1960s, and records of and by residents are spotty at best. Brooklyn’s major (white) newspapers rarely covered the town, and many of Weeksville’s adults were illiterate. Thus they produced few written records of their own thoughts and experiences.

Ryan surmises, regarding this “legacy of racial exclusion,” that “although there undoubtedly were black people with queer desires in the city’s early years, they don’t show up in historical records until right before the beginning of the twentieth century.”

He points out that Walt Whitman, who cruised the waterfront of Brooklyn and enjoyed its sexually adventurous sailors who populated the raucous, libertine waterfront bars, was free of the “larger structural forces” that “kept women and people of color away from Brooklyn’s waterfront and its opportunities for exploring queer life….” Racism toward POCs’ limited fraternization and Victorian strictures on women discouraged private spaces for same-sex relationships to fully develop.

Whitman’s stature as a gay poet and his great appeal, Ryan explains, “was primarily pitched to and received by queer people who were like him: white, male, cisgender artists.” He goes further to write:

While Whitman professed a love of all people and believed in freedom and equality for men and women, black and white, he was rather disinterested in people who were not white men. He referred to black people as “darkeys” who were “superstitious, ignorant, [and] thievish, “though “full of good nature,” and he seemed surprised when women were interested in Leaves of Grass, since it was so from and for a male perspective.

Focusing on several queer Brooklyn locales–the waterfront, Sands Street, Middagh Street, Coney Island, the Brooklyn Navy Yard, and Brooklyn Heights–as well as historical events such as the advent of World Wars I and II and their profound societal impact on the traditional American family and the greater visibility of homosexuality, Ryan gives us a rich journey through the birth, decline, and rebirth of a distinct queer community.

By identifying and investigating the histories of several known Brooklyn queer figures and utilizing their correspondences and oral or written histories, Ryan vividly reconstructs an entire lost past: from Loop-the-Loop, a young white trans woman, to Mabel Hampton, a black “Butch” entertainer; from the gay poet, Hart Crane, to the wildly successful gay author, Truman Capote, living at 70 Willow Street. Ryan’s scholarship turns up an abundance of riches.

I was especially captivated by his research into Crane’s love affair with the handsome Danish sailor and journalist, Emil Opffer. Opffer became Crane’s muse, whom the poet nicknamed “Goldilocks and Phoebus Apollo.” I also was greatly interested in 7 Middagh Street aka “February House,” the queer “urban commune” of sorts, “literary menagerie,” and who’s-who collective of international queer artists, that flourished in the 1940s. Ryan writes:

Ryan’s colorful account of this mélange of eccentric personalities is filled with delicious details about personal squabbles, jealousies, day-to-day living arrangements gone awry, exciting collaborations and professional triumphs, and the ultimate clash of young, brilliant egos. For example, he describes when “Auden demanded that Paul [Bowles] move his piano to the low-ceilinged, dimly lit, dusty basement [“Britten found the music distracting from his own work, while Auden found it simply insufferable.”]. Paul refused, George Davis backed Auden, and the piano was quickly moved.” Other memorable anecdotes include McCullers walking hand-in-hand with Gypsy Rose Lee up the street under the spell of the ever maternal and flamboyant burlesque queen, or Auden creeping into Kallman’s bedroom wrapping “his hands around his lover’s neck” and attempting to strangle him to death.

I was also fascinated by Ryan’s sexual chronicle of William Christian Henry Miller, an  “inventor, model, kept boy, advertising executive, furniture designer, visual merchandiser for the Lord & Taylor department store, amateur sexologist, and ‘one of the most gorgeous men in 1940s Manhattan.’”

By demystifying the process of historical research and maintaining a robust self-awareness and open point of view, Ryan’s study stays extremely welcoming and inclusive. His metanarrative, like all good history writing, brings the past vividly alive and makes us excited to learn more about who we were, are, and possibly may be in the future in this dynamic, evolving city many of us call home.

'The Greek House : The Story of a Painter’s Love Affair with the Island of Sifnos' by Christian Brec...
'Labyrinth Lost' by Zoraida Córdova
'Shadow Walkers' by Brent Hartinger