‘Nothing Looks Familiar’ by Shawn Syms

‘Nothing Looks Familiar’ by Shawn Syms 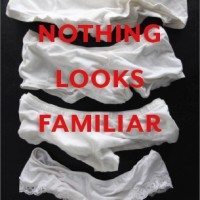 Lifted from their native habitats—which include a chilly prairie slaughterhouse kill floor that smells of blood and fear; the decrepit Brentwood Pines Home for the Aged; a metropolitan park depicted as “nighttime playground for crackheads, whores, and homos;” a scrappy campground in Quebec circa 1980; and a suburban bedroom a stone’s throw from Niagara’s “gaudy tourist strip”—the enjoyably diverse population of characters that reside in the eleven settings of Shawn Syms’ vibrant debut collection nonetheless share common threads. They often feel trapped—or hemmed in, at least. They’re ground down by life—and their history of iffy choices. And, whether serious or dreamy, they’re eyeing ways out.

Whether seething and confused teenagers, a set of quarrelsome sisters facing their sunset years without grace, settled professionals wondering “Is that all there is?”, or petty criminals making do while high, Syms’ fallible crew may not be the wisest and self-knowing of creatures, but they’ve got endurance to spare.

In “Family Circus,” the narrator, a tired mother who runs a check-forging operation out of her crummy apartment, pictures scenes of escape between bumps of crystal meth to keep alert and calling Robitussin her “only reliable babysitter.” “Man, Woman, and Child” describes an intersecting trio of characters centered on a variety-craving bisexual woman who opts for a sexual liaison with the downstairs neighbor, a highly paid human-rights consultant committed to an elaborate “adult-baby lifestyle.” Her sister in spirit, vacationing Beth in “East on 132,” feels “closed in” by her unfailingly nice husband and kid. On the sly, she scratches that itch with “a rough, gritty act” at a campground where some bikers have stopped. “On the Line” opens with a woman’s fantasy of escape to the coast. She’s hungover at the start of her slaughterhouse shift and soon discovers that her previous night’s liaison with a married man—who is a coworker, along with his wife—is that day’s big news. “I wish I were anywhere but here,” she thinks. And that’s before another co-worker calls her a “fucking whore” and spits in her face. In each case, Syms leaves each character’s fate a pressing question: will her next destination merely be a new place to mess up, or will a change of scenery truly offer a fresh start?

Syms visions of urban living are likewise enticing. His cities—sprawling Toronto, chiefly—guarantee ample opportunities for serial mistakes. A snapshot of living near the edge, “Four Pills” follows Adam, an unemployed warehouse worker and intermittent crack user, on a ragged Sunday night. Fueled by drugs, poverty, an eternal quest for a good time and some panic about his sexual identity, his downward escalation involves a smashed skull and a tormented transsexual and culminates in a roofie-aided scene with unknowable consequences. Slyly funny, “Taking Creative License” offers a day in the life of an artist wannabe who procrastinates by writing “Ennui is the religion of my generation” and other gems of wisdom on Twitter, creates a false online identity as a gay man, and pleasures herself with a glue stick; while the Internet exchanges of “Three Tuesdays From Now” begin with: “Dude, will you accept $500 to penetrate me?” In the harrowing “Snap,” a burned-out counsellor for a sex-offender men’s group faces his own limitations when work begins to invade his home life.

If the two sisters of “The Eden Climber”—who swapping verbal jabs for seven decades—underscore a unique and enduring human talent for never learning from mistakes, two delightful stories of awkward youth present alluring glimpses of possibility. In “Get Brenda Foxworthy,” three brooding outsider teens decide, circa 1986, on a complicated plan of revenge against the titular insider, the mean girl of their class. Naturally, plan and execution don’t quite coincide. A bully’s ultimatum forces the young gay guy in “The Exchange” to summon his courage, forge an unexpected alliance and find sympathy for his oppressor. These vignettes of ethically entangled adolescents suggest a promising world of potential, one that in the stories featuring adults seems easier to dream about than to make real.

'Queer and Trans Artists of Color: Stories of Some of Our Lives' by Nia King
'Dr. Edith Vane and the Hares of Crawley Hall' by Suzette Mayr
The Expertly Wrought Here is the Sweet Hand Contains Humor, Desire, and Terror

Brett Josef Grubisic lives in Vancouver Canada, where he writes and teaches at the University of British Columbia. He's the author of two novels, 'The Age of Cities' and 'This Location of Unknown Possibilities', as well as other titles.