‘Tarry This Night’ by Kristyn Dunnion

‘Tarry This Night’ by Kristyn Dunnion 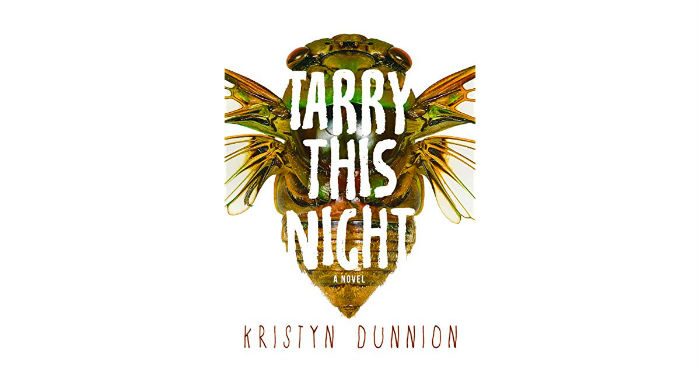 Since the 2016 U.S. presidential election, dystopian fiction has been on our minds. Of course, utopias and dystopias have long been a part of literature and cinema, responding to contemporary politics by imagining their repercussions for the future. But dystopian fiction played an important role in mediating the transformation of American political culture in 2017, with classics like George Orwell’s 1984 skyrocketing up the New York Times bestseller list, Hulu’s timely adaptation of Margaret Atwood’s The Handmaid’s Tale, and the rediscovery of It Can’t Happen Here, Sinclair Lewis’ cautionary tale of fascism coming to America. All of this has inspired a robust conversation within literary communities about how to make sense of this turn to the dystopian, and where to find the potential for resistance and protest in a form that, on the surface, seems radically pessimistic.

Kristyn Dunnion’s new novel, Tarry This Night, has thus entered onto the literary scene at a particularly timely moment, but like any good dystopia, her fictional universe is not a superficial response to current events, but a thoughtful reflection on deep-seated structural inequalities. Tarry This Night focuses on a few members of “the Family,” the last vestiges of a religious cult, hiding out in a bunker beneath the surface of a war-torn United States. The Family is ruled by its patriarch, Father Ernst, a once-charismatic religious leader preaching polygamy and traditional religious-conservative values.

When the novel begins, the Family is in dire straits: having lived underground for seven years, most of their reserves have been depleted, leaving them—mostly women and small children—close to starvation. The history and dilemmas of the Family are related through an ensemble of characters: Father Ernst; Susan and Rebekah, two of his wives; Ruth, a young pubescent girl, whom the patriarch desires as his seventh wife; and Paul, a teenaged boy, whose growth into manhood is perceived by Father Ernst as a threat to his own total control.

Through these various perspectives, the reader gradually learns the history of the Family, and its role in sparking the political and environmental devastation that reigns in the world above the bunker. Using characters from different generations allows Dunnion to convey how these individuals come to be caught up in the Family (Susan, for example, was abused as a girl, and was drawn to the Family not because of Ernst’s charm, but because of the warmth and care of his other wives); what it’s like to grow up in this environment of total control (girls expect to be wed to Father Ernst, even when they’re related to him by blood; boys, too, face danger when they enter puberty); and what keeps them there.

Most of the book’s drama plays out in the bunker, whose confines create a mounting sense of claustrophobia and tension. As the book progresses, life in the Family becomes increasingly untenable, and the reader knows that it is only a matter of time until the pressure becomes too much for the Family to bear.

Queerness is found mostly at the peripheries of the Family’s psychological drama. The novel offers glimpses of queer desires—Susan loves another of the patriarch’s wives; a long-lost gay friend of Paul’s helps him see the folly of Father Ernst’s teachings—but they generally remain at the margins, secrets that characters cannot share with one another within the confines of the bunker. It is yet another example of how Father Ernst’s tyrannical will and obsession with traditional gender roles (with his own theological twist) result in the rest of the Family’s repression.

Tarry This Night imagines a world destroyed on both national and intimate scales. Dunnion shows us characters faced with the choice between surrendering their faith and repudiating their entire lives on the one hand, and physical destruction on the other. Yet in depicting the last days of the crumbling Family, the novel also reveals the potential for resistance, rebellion, and change. By showing the fragility of oppressive regimes and dystopian universes, Tarry This Night makes room for hope, even within the confines of its tense, psychological drama.

'Double Bound' by Nick Nolan
'If You Follow Me' by Malena Watrous
Francine Prose: On Her New Historical Novel, Exploring the Psyches of Nazi Collaborators, and Examin...

Alyssa Greene is a writer, fiction editor for Quarterly West, and editorial assistant for the Lambda Literary Review. Her work appears or is forthcoming in Passages North, The Southeast Review, Gone Lawn, MoonPark Review, and Jellyfish Review. Find her on Twitter at @acgreenest.