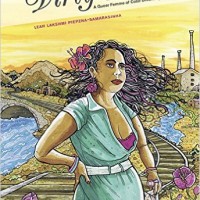 Every cell of my body. Naked and tough, something new and beautiful, adorned. Learning these streets and how to walk down them. Learning how to find red silk in a  bargain bin, to tighten straps, to walk. To meet the eyes. To swish my ass, to insist in the pleasure of thighs brushing together, glaring, I will fucking kill you if you look at me. I would fall into bed, exhausted.

A few years ago, I saw Leah Lakshmi Piepzna-Samarasinha read at Culture Fuck, and Oakland-based POC/Mixed reading that happens on a monthly basis. She had just gotten back from a trip to Australia, and was describing the lush landscape, her ancestry, the complicated nature of the landscape. She described walking down a street she hardly knew, in a slip and boots.

“I’ve been walking, scantily clad, down dark, unknown streets for decades now,” she finished her story.

She proceeded to read a poem, a manifesto to hard femmes, that knocked me out. And when I picked up Dirty River, I felt the same lose of wind, the same landscape both familiar and harrowing. Throughout the memoir, which winds around itself as a car winds around an island—with more emphasis on journey than destination, with panoramic views of vast oceans, pitted vistas, the isolation and unparalleled magnificence of land unto itself—I felt the same push-pull that I felt reading other literature that speaks specifically to femme, survivor, working-class queers. Piepzna-Samarasinha’s book weaves together her life as a series of rivers that merge into one another, upon the foundation of family (complicated narratives, mixed-ness, mothering, abuse, trauma, dissociation).

There are so few narratives about/by femmes of color, about/by femmes who have been harmed and hurt by intersecting systems of oppression. They are so few stories and archives of walking in the world as a way to be seen (as an act of war against said systems of oppression). And within the narratives that do exist, there are even fewer stories about femme survivorship that encapsulate the struggle, the trauma, and also, the compassion:

You can say: this is not a story about hating the abuser, about the abuser as monster. Some abusers are monsters, but most are not. If they were nothing but horrible looming giants who tore through our days, even the neck-high levels of denial and dissociation in this culture would not allow the abuse perpetuated to stand.

I once read an article by Piepzna-Samarasinha where she said, “I want to live in a world where no one is disposable.”

I once heard her say, “People go to the ocean because they’ve run so hard that they need to either stop running, or fall off the edge of the world.”

Her words, and her work, are the things that stick to the ribs, that make a meal from dried beans and coconut, that find red silk in a bargain bin, that embody—truly embody, in a disembodied world—what it means to be both in the world in a way that you want to be (in seemingly little armor, even), and to be full of sharp stars. Ready to both love and fight.

She explores the here and now of the past and present—a mechanism that is not only difficult to do in writing, but also difficult to do in a way that does justice to raw experience. Dirty River goes above and beyond being a story of survival; it is a manifesto for those of us who have also been walking, scantily clad, down dark alleys for most of our lives.