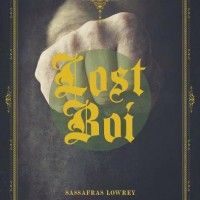 Once, while working in a store where the owners’ young kids spent the day with us, the youngest, a two year old, turned to me and asked, “Are you a grown-up?” It was an oddly emotional moment. While taking a core sample and counting the rings would inevitably lead to a positive answer, some part of me rebelled against the mere idea and passed the question along to his mother with a story about not wanting to say anything inappropriate. What does it mean to grow up? Young children play at every aspect of the idea, from bringing home the bacon to smacking Barbie and Ken together in varied positions, but the allure of staying outside the mainstream is terrifically seductive.

Lost Boi plays with these ideas to great effect. It’s a leather-wrapped, gender-flipped revisitation of Peter Pan set in a warehouse filled with runaway bois bound to Pan by a leather cuff and the promise to never grow up and become “nice lesbians.” Stealing to survive, wheeling and dealing among other outcasts and outsiders, Tootles (the narrator and Pan’s chosen favorite) and the other residents at Neverland squat use their youthful rebellion as a way to reject the families who rejected them first. When Pan brings home Wendi (after seeing her read at a poetry slam) with baby dyke sibling John Michael in tow, the novelty gives way to concern. Wendi is there to be a Mommy to Pan and all the lost bois, an alluring proposition (it’s nice to sit down to a nutritious dinner, to say nothing of having the communal strap-ons all neatly put away for once), but one that opens a portal onto the world of possibilities inherent in adulthood.

Author Sassafras Lowrey, who has a stated preference for the gender-neutral pronouns ze and hir, goes well beyond merely updating a children’s classic here. Ze writes about the warehouse squat, with its hammocks and swings, and captures how it’s both a source of comfort and disgust for the bois. There’s great pride to be taken in a life built all on one’s own, but it sometimes falls apart in front of company. They go out of their way to find bedding for Wendi that doesn’t reek of cum or body odor at one point, and it’s painfully clear that a Mommy can do only so much for these kids without intervention. By story’s end some bois have reconsidered growing up, but Pan remains ever-youthful in pursuit of new bois to raise. There’s no easy answer, but Tootles’ decision to move on and manage a shelter for LGBT youth points to a healthy way to grow up without sacrificing hir identity.

“(T)he Neverland had always begun to look a little dark and threatening by bedtime. Then unexplained patches arose in it and spread, black shadows moved about in them, the roar of the beasts of prey was quite different now…” This quote is from J. M Barrie’s original novel, itself a far darker affair than the folks at Disney would have us recall. The humor is morbid and catty by turns, and while dog nannies and flying boys are fanciful, they’re used to very dark ends here. So Lowrey’s tweaks, like making the Crocodile a heroin addiction that’s draining the rigor from Captain Hook’s upright codes of leather conduct, are not at all out of place. Referring to Neverland’s rejects and runaways as having “fallen out of their prams” is drawn from the original, but in this context signals that telling and retelling our stories can be a healing balm when the truth is too painful to recall.

Lost Boi begins by rejecting convention, but by story’s end it has in many ways bent and adapted convention to its own ends. It’s a counterculture fairy tale, but the way Lowery turns all expectations upside down and finds hope in the darkest corners is the real magic here.

'Mucus in My Pineal Gland' by Juliana Huxtable
Gore Vidal Writing As Edgar Box
'Visions and Revisions: Coming of Age in the Age of AIDS' by Dale Peck

Heather Seggel's work has appeared on 'The Toast,' in 'Bitch' magazine, at WashingtonPost.com, and many other venues. She is loosely based in Northern California while trying to find her forever home.