The Publishing Professional Award is selected by Lambda’s Board of Trustees.

“I have been impressed by Michele’s contributions to the LGBTQ publishing world for many years. It’s not only her commitment to her authors and our community which puts her in mind for Lambda LIterary’s Publishing Professional Award, but the way she inspires us with her passion and dedication to social justice for all,” said Board of Trustees Vice President Amy Scholder.

Michele will be recognized as the winner of the Lambda Literary Publishing Professional Award at the 29th Annual Lambda Literary Awards ceremony on June 12th in New York City. 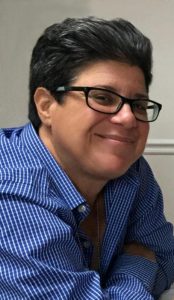 Michele Karlsberg shows how ordinary people make extraordinary contributions to their communities. Her philosophy is simple: “It is our giving that makes us strong, not our receiving.”  Bottom line, she loves what she does. She is grateful for her beloved mentors, some of whom are Nancy Bereano, Sasha Alyson, Barbara Grier, Richard Labonte, Carol Seajay, Roz Parr who helped her gain knowledge and confidence in the book publishing industry.

She has worn many hats in her twenty-nine year career.

As a publicist, she brings a unique combination of skills to effectively carry out publicity/marketing campaigns for authors, organizations, events, comedians, musicians and film/theater professionals. Her list of clients has included Katherine Forrest, Felice Picano, Kate Clinton, Stephen Fry, Jewelle Gomez, Assotto Saint, Dorothy Allison, Martin Duberman, Judy Grahn and Minnie Bruce Pratt to name a few. From her home office stateside, Michele represented many International Publishing companies: Spinifex Press (Australia), Second Story Press (Canada), Bruno Gmunder (Germany) and Creation Books (UK). She generously speaks at many conferences about the business of publishing, publicity and marketing. When she gets to share what she knows about marketing and publicity in the world of publishing, she is one happy woman.

She is one of the founders/publishers of Amethyst Press, home of groundbreaking authors Dennis Cooper, Kevin Killian, Mark Ameen, Stan Leventhal and Patrick Moore. She is a strong advocate for independent booksellers and worked with Carol Seajay on the Feminist Bookstore Network. She is a curator of Outspoken, a nationwide LGBTQI literary series that helps new and established voices reach a wider audience.  As publisher at Bywater Books, she published many award winning authors.

She is a passionate advocate for the Pride Center on Staten Island, whether it was to help supply books to build their library, participate in the LGBTQI Pride celebrations, helping build visibility for the Pride Center or helping other LGBTQI people in need. In 1991 she was part of the team that opened the Pat Parker/Vito Russo Library at the NYC LGBTQI Community Center. For many years she also worked with the Astraea Writers Awards and The Lesbian Herstory Archives.

She is a producer:she produced Holland America Cruise Lines’ first BOOK EXPO along with Olivia Travel. In 2010 she produced BACK 2 BACK at the St George Theater in NY with Lily Tomlin and Kate Clinton. She is most proud of producing events to honor the passing of Audre Lorde, Melvin Dixon, Stan Leventhal and John Preston.

Michele is a planner; she has been instrumental in planning the programming of many conferences and festivals such as OUTWRITE, Saints and Sinners, San Francisco Book Festival, BookExpo America, In Our Own Write, Behind Our Masks, GCLS, Readers and Writers and the Gay Games Cultural Festival.

She is an author; her non-fiction piece entitled The Isle Of Staten appears in the book Love, Christopher Street (Chelsea House Editions). Her WORDS column appears monthly in the San Francisco Bay Times. She wrote Self Publishing LGBTQI Books and is the co-editor of the Lambda Literary Award finalist To Be Continued and To Be Continued: Take Two (Firebrand Books).

When Michele is not focusing on the visibility of the LGBTQI community she persists to resist the current administration.

Tony Valenzuela is the former Executive Director of Lambda Literary