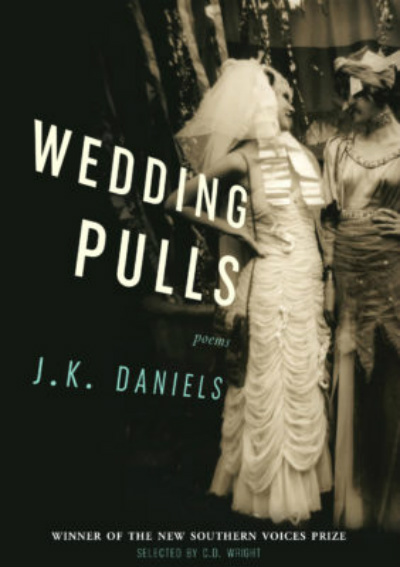 Think of J. K. Daniels’ debut collection, Wedding Pulls, as a quiver stitched from the “what-might-have-been-if,” the fur and hide of a deftly deployed subjunctive: “you did not want to be a bride but would have been.” Here we encounter poetry as archery: precise, adept: each enjambment taut as a bow, each image piercing as the head of an arrow. Behold these early punctures:

the blank pink of scars

Vultures riding thermals, rising in slow circles, are called a kettle: they move
like bubbles in a boiling pot

So much foreboding is how the book begins, reminds us how fraught the tradition of marriage is:

One can adapt to lack.

I’m not quarrelling: yes is not the same as/ not no

Tell me of zone defense and I’ll tell you of the great divisions of the earth’s surface: Frigid, Temperate, and Torrid.

Our poet-speaker proves herself a master-archer. She tells us forthright: “I believe only in the discrepancy between what is/and what is said.” These poems strike, slice, and skewer that interstice. Bullseye!, time and again.

The title poem acquaints the reader with a Victorian custom from which the book’s three sections—THIMBLE, RING, and ANCHOR—derive. “Wedding pulls” refer to charms baked or iced into a wedding cake, which unmarried guests draw out of the cake as portents of their romantic and pecuniary fates.

Behold how the caesuras in this poem demarcate the discrepancies “between what is/ and what is said”:

I love in particular the concrete imagery of this poem, its shot-through quality that resembles lace. Here I see a handkerchief (“old” and “borrowed” perhaps) that a vintage bride would tuck inside her sleeve. Daniels uses the caesura’s sonic pause, which is also its visual gap, to cast white shadows of doubt across the page. The “what-might-have-been-if” haunts each hole, leaving the subject-turned-reader to wonder: if I had pulled a different object from the cake, whose riches and affections would now be mine?

I love also that this poem announces, with unabashed delight, Daniels’ probing and playful relationship to language. She’s having fun riffing on her own phrases—“ring me up dear” becomes a new way to say “getting married” (perhaps a twist on the popular lyric, “put a ring on it”), and words like “dear” /“year” and “scorn”/“forlorn”/”born” are rhymed deliberately and internally to create a looping effect, sounds calling to their sound-mates across time and space.

Just look at how closely this poet inspects words, their lovers and rivals, their fraternal twins. One of my favorite examples appears in the poem “As Eve”—in many poems, Daniels assumes identities not her own and queerly embodies them—where she makes me fall in love with the letter “e” all over again. (And perhaps it’s no coincidence that “e” is the letter of eye charts, too. This poem is all about seeing anew.)

We begin with the implied Adam: “His eagerly, my eagerness. He was older and, as they say, endowed// by the creator: the earl of earliness, of earthlier pleasures.”

Behold that taut enjambment—how we linger a moment on “endowed”—then snake (a word I’m using deliberately here) around the bend to “by the creator.”

Ahead are “rough elbows,” an “earring in his left ear.”

Behold the arrowhead, so sharp and assonant:

Not love. An exquisite exposure:
the image floating up from the emulsion.

Eros or error or
his sad story: estranged, expelled from his father’s esteemed estate, etcetera.

It cannot be coincidence either that this poem about the biblical First Couple—the mythical First Marriage—is arranged in couplets.  Another bullseye!, Daniels’ unflagging union of content and form.

I can see the anatomy of an arrow in this poem’s sleek structure, its progression from nock to fletching to crest—what a poet might call “the volta”:

That last evening of my not-knowing, I asked, who
is exacting, what is eternal, what everlasting?

He echoed the radio: love and evermore. He called me
earnest. Earn for short.

Now I can’t un-see the “earn” in “earnest” (which sounds like “urn,” so there is a little death in it, too…), the way one who is earnest learns she must earn her keep.

All arrows have a shaft, a long line connecting the crest to the point:

He entreated.  He entered.  And I was
the epithet [curse], the epitaph [death], the epilogue [end]

and then the exit [escape].

Behold how Daniels has streamlined the poem sonically—and in so doing, elegantly compressed all our associations with Eve. Behold how the prelapsarian world is penetrated again, anew, by the knowledge that is language—we watch it happen right before our eyes—as everything comes to a swift, incisive head: “We existed (or at least I thought we did)./What a difference a day and an s, well-placed, make.

Exit/exist. I hear these words in one other now as echoes, fraternal linguistic twins. Perhaps the “s” is analog to the rib, what separates Adam’s exit from Eve’s existence, both of them expelled for shared and separate crimes from the Garden of—yes, another e-word—Eden.

As a reader of wide-ranging tastes, what satisfies me most is a poet whose vision I can trust. Daniels’ poetry is piercing and propulsive, and in every poem, she strikes a target I had not expected to hit. In fact, she finds bullseyes! where I had not even perceived a board.

In the poem “As Alice on Gertrude’s Lap,” readers are invited into an explicitly queer space (the lap here both literal and linguistic). At once, we realize that Daniels is channeling Stein in stunning emulation. Both are poets who instantiate queerness through a sly, seductive anatomizing of words. Behold:

Not on. Abreast.  A breast is abetting and aiding. A broach, a breast, un-
clasped abuts a button.  Accoutrement, accessory, a necessary country.  A
dress addressed, a red awry.  A wry grey adored.

Here I see every word anew, and all the words together fletching the arrow’s long shaft toward meaning. Of the arrow, we can surely say the fletching is the queerest part, that which juts out at the tail end like feathers, forming a gestalt.  Further fletching

An accident, a vase accosted, a cost, a breaking and a mending.  Amend-
ments and administrations.  Aspersions and aspic.  A tone, a meant tone.
Atonement: cold meats on a platter, the placating cheese (there is no excuse).
Attraction a traction.  Ask again and I’ll stay.

“As Alice on Gertrude’s Lap” belongs in the company of Robert Duncan’s Derivations, another exceptional linguistic homage to Stein. This poem also ensures the reader will never again presume the innocence of crudités, the neutral, not-for-comment nature of hors d’oeuvres. Remember: Daniels has already warned us about the “discrepancy between what is/and what is said.” Now consider: how many times, in the interest of “small talk” and “making nice,” have we the readers been placated by cheese? (No excuse indeed!)

My colleagues in fiction often speak about “statements of theme,” occasions in a story or novel where a narrator reveals the larger intention of the work. Daniels’ statement of theme appears in the form of a question, one that pierced me deeply: “Is there a sentence/ you regret revoking?” Not a sentence you regret (which spurs its own contemplation), but a sentence you regret rescinding, retracting—in other words, that which you took back but should have let stand.

Wedding Pulls is a sinuous knitting of all those sentences mistakenly revoked, coerced apologies and mumblings under the breath, confessions scribbled onto pages that were later torn or burned up. Now, poised in the art-field, this poet-speaker returns with her quiver, her language-arrows sharpened to their finest points, and lets them loose (picture their glorious arc!) toward a fortress of convention/tradition/binary logic/anti-ambiguity.  She strikes religion, history, literature, film, visual art. She parses language to its shrouded core.

At the end, our poet-speaker declares, multi-valent as ever: “I am, as you have/ always found me, wanting.” Who doesn’t dwell in this dual state of deficit (wanting) and desire (wanting)? Prepare to be cleaved by this book.

Julie Marie Wade is the author of ten collections of poetry and prose, including Wishbone: A Memoir in Fractures, Small Fires, Postage Due, When I Was Straight, SIX, and Same-Sexy Marriage: A Novella in Poems. With Denise Duhamel, she wrote The Unrhymables: Collaborations in Prose, published in 2019 by Noctuary Press. A recipient of the Lambda Literary Award for Lesbian Memoir and grants from the Kentucky Arts Council and the Barbara Deming Memorial Fund, Wade teaches in the creative writing program at Florida International University and reviews regularly for Lambda Literary Review and The Rumpus. She is married to Angie Griffin and lives on Hollywood Beach.Press, 2010), Small Fires: Essays (Sarabande Books, 2011), Postage Due: Poems & Prose Poems (White Pine Press, 2013), Tremolo: An Essay (Bloom Books, 2013), When I Was Straight (A Midsummer Night's Press, 2014), and the forthcoming collections, SIX (Red Hen Press, 2015) and Catechism: A Love Story (Noctuary Press, 2016). Wade teaches in the creative writing program at Florida International University and lives with her spouse, Angie Griffin, in Dania Beach.