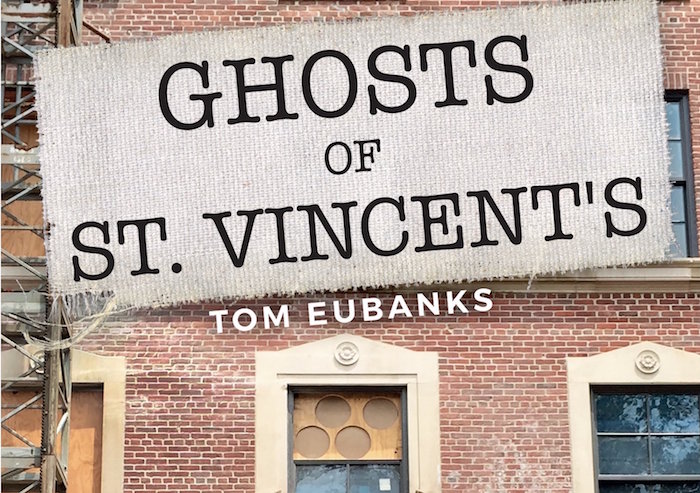 Writers are so often our best historians. Those who write of the earliest and most pain-filled years of the AIDS pandemic are certainly among the LGBT community’s most valuable. Even the documentation of laypersons, of whatever skill, are a contribution and a vital historical document of the crisis. But sometimes, there arrives a written account so vivid, so adeptly constructed, that it transcends genre and the thrust of its main topic, the disease that took so many far too soon. Ghosts of St. Vincent’s by survivor Tom Eubanks does just that—it turns the “AIDS Memoir” on its head and in the process provides everyone, regardless of life’s experience, with an incredibly entertaining read. It is in fact, difficult to believe that so many publishers would turn down such a book due to a so-called abundance of AIDS-related material, leading Eubanks to self-publish. We are all fortunate that he shared the fascinating story of his eventful life.

At the heart of this memoir is the fabled New York hospital, St. Vincent’s. Begun by an order of charitable nuns in the Mid-Nineteenth Century for the city’s most needy citizens, its seventh floor AIDS Ward became ground zero for the scourge crippling New York’s gay community. Eubanks himself received his medical care here as a young, uninsured gay man. He spent a final six months here fully expecting to die until the new AIDS medications of 1996 brought him to life again in a Lazarus Effect. The tale of Lazarus is a recurring theme throughout the book and provides a moving metaphor. Interwoven with his compelling personal story are semi- and wholly-fictional accounts of some of the hospital’s most famed and notorious patients. Cardinal Spellman, Roy Cohn, and Mayor Ed Koch, a triumvirate of figures who were anathema to the gay community, all make colorful appearances.

Eubanks’s own story of a young suburban man who dreams of joining the city’s flourishing gay community is also compellingly told. He arrives to the city of his dreams as a young performing arts student and finds the men he worshipped decimated and haunted by their ghosts. The bath houses are shuttered, the once-flourishing bars and clubs he had read about and seen on TV are mostly empty. As a nocturnal flaneur, he wanders the streets of the West Village, finding the detritus of so many lost lives for sale on the sidewalks. He paints a haunting picture of a night at the legendary gay club the Saint. It’s mostly empty and Eubanks notes that where once the dance floor was crowded with shirtless muscled men exchanging kisses and licking the sweat from each other’s muscled torsos, those few left are afraid to drink from the water fountains.

But young gay men, such as himself, still flock to the city. Even as they fight valiantly the war against AIDS, they still find their pleasures. There are new bars and clubs and a burgeoning gay scene in the city’s East Village where Eubanks himself lands. It’s a nostalgic and bittersweet portrait painted beautifully of a time some of us recall fondly and yet more will find fascinating. It’s hard to list the many familiar names and faces brought to life here. Still, even as this new generation danced and played, they were still under siege by a plague—Eubanks himself testing positive in 1990.

The most effective prose, be it novel or memoir, does this—it brings to life a time and place, sometimes one long gone. Eubanks uses both constructs beautifully in an interwoven and sometimes non-linear style that does what is most important—it tells a fantastic story that manages to transcend genre.

Stones Under the Table and Missing Pigs: A Review of Matias Viegener's ‘2500 Random Things About Me,...
'The Battle of Versailles: The Night American Fashion Stumbled Into the Spotlight and Made History' ...
'The Lavender Locker Room' by Patricia Nell Warren