May We Present… Gabriel Ojeda-Sagué’s Madness

May We Present… Gabriel Ojeda-Sagué’s Madness 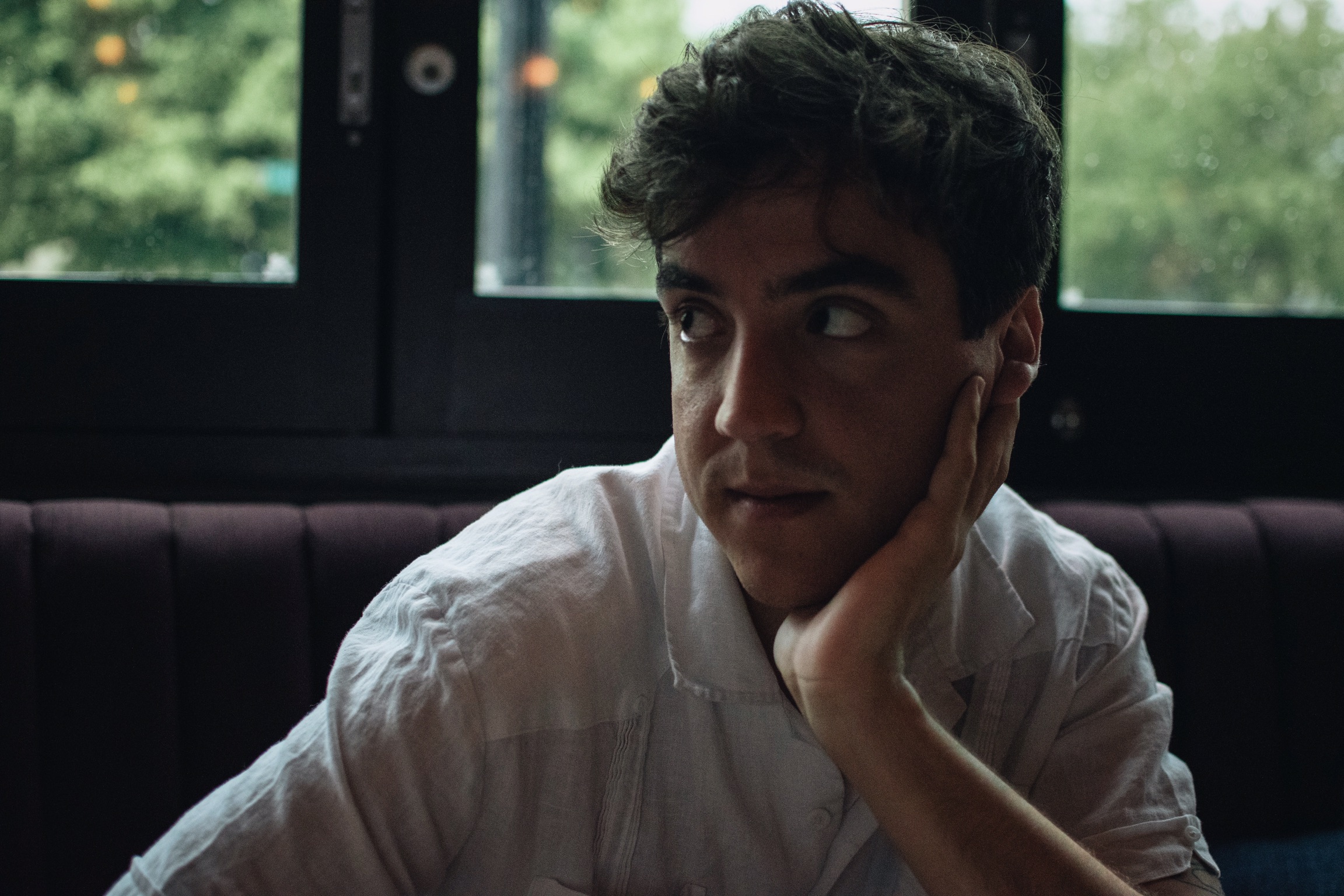 Welcome to May We Present…, a column from Lambda Literary that highlights writers with recent or forthcoming publications. This March, we’re diving into Gabriel Ojeda-Sagué’s Madness, a genre-bending book of poetry published on March 15th by Nightboat Books. The work takes the form of the selected poems of a fiction poet named Luis Montes-Torres who lives from 1976-2035. “Published” in 2055, Madness is composed of Montes-Torres’ poetry as it spans his entire life, interspersed with commentary by the two (fictional) editors of the collection.

If you (like me) are invested in literary form and structure, this is the book for you. Clever and captivating, Madness explodes the boundaries of what poetry can be, what it can look like, and what work it can do. It’s a poetry collection that reads like a novel, grappling with topics of temporality, reality, identity, and belonging. Spanning a lifetime of poetry, Madness contains writing from the past, present, and future, and invites readers to consider how language shapes (and is shaped by) one’s life. Ojeda-Sagué artfully constructs Madness within a liminal space between fact and fiction that requires readers to read from a place of productive uncertainty. I will return to Madness again and again throughout my own life, anticipating what thoughts and considerations the book will provoke upon every read.

Below, Ojeda-Sagué explores poetry and temporality, reminisces on the best and worst classes he ever took, and provides us with a plethora of reading recommendations.

When did you realize you had to write Madness?

Madness came out of the start of a serious mental health struggle for me in 2017/2018, which later resulted in an OCD diagnosis and ongoing treatment. At the same time as this was happening, I was reading voraciously in some effort to “get ready” for grad school, and I was living with my now-husband in Philadelphia. That constellation of things got me started writing a few isolated love poems. That love angle was interesting and enlaced some of these mental health concerns but couldn’t really get to the meat of them, since these poems were by nature about a relation rather than an individual. So, I started to think about what it would take to write about my experience of mental health in a way that would feel interesting and dislodge a couple of things, without feeling too obvious or one-dimensionally reparative. At the time, as I said, I was reading a ton. I had gotten into reading selected poem collections of various poets, and I was fascinated by that form—its need to be both partial and totalizing with regards to an oeuvre. And I thought okay, what if these love poems were written by someone else? What if I made a story of the person who would make the gesture of writing a poem that says “I love you” in some desperate attempt to clarify things for themselves that feel totally unclear? Madness was built from that set of propositions into the architecture it has now.

The form of this collection is absolutely fascinating, especially in its engagement with the boundaries of truth and fiction. What did writing a fictional poet’s past, present, and future poetry enable you to do with this collection?

Well, I always like writing at some distance, with some form of alienation and abstraction. I’m not much for confession, at least in books. So, this book has a very literal and formalist version of that aesthetic alignment of mine. Because there are so many frames in this book (from the work of the fictional editors, to the fictional “books” within the book, to the poems themselves, to the criticism of the poems), I can really layer these simulations of sincerity, irony, catharsis, alienation ways that I think are compelling. For example, it’s a not-uncommon gesture of the book that Lu can find something incredibly moving and important, and his editors can think he’s totally wrong. Or Lu can write a poem in a mode totally ironic for him that will feel sincere when viewed from the perspective of his fictional critics or even the real readers of the book. One of the book’s challenges (and one of its greatest opportunities) was in simulating a kind of growth arc for Lu’s work. This was tough, from a writerly perspective, to make it seem like his work grew, considering it’s all illusion. But it offers some real, and I hope interesting, nodes for relating to the text.

Can you speak to your relationship to (the fictional) Luis Montes-Torres, as well as to the two (fictional) editors of the collection? Do these relationships evolve as you gain temporal distance from the writing process?

Lu at one point describes himself as wavering constantly between feeling “crummy” and “in awe.” That’s very much his character. Either irritated, down, self-flagellating, and crummy, or totally focused, attached, relishing in the sublimity of the natural, or of his boyfriend, or of his dog. Something about this wavering makes him feel very tender to me. His life story is sort of a mix of my own, my father’s, my uncle’s, and some of my favorite writers, and so I can be a bit precious about him. But the thing with Lu is that he’s so enormously stuck. Stuck because of his social situation, stuck in patterns of mental health crap, stuck in that wavering I mentioned before, stuck because of a society that does very little to give him what he would need to get unstuck. And I think part of the book is me wanting to shake him around a bit. I’m curious, now that the book is out, to see how people react to him, what they think of him. I want to know how he sits with other people.

I actually think the book’s attempts at writing poetry will not stand up to the actual future! I did not set out as a goal of mine to predict anything about what poetry will be like in these periods. Instead, writing the poetry of Lu’s 2035 felt like an exercise in making arcs for certain thematics for him and his work, rather than predicting a scene or some circulation. Part of why this book goes into the future is to solve a problem that I had as the writer. I knew I wanted to do a book depicting a whole life, birth to death, but if I set his death in the contemporary or the near past, it would render the book more of a historical fiction. Part of my attempts into the future are to avoid the purview of historical fiction, and to set my goalposts differently.

Now, this I did think more about. I wanted to build the world that Lu inhabited in the near future, but I didn’t want it to end up too sci-fi, because I would have totally failed at that endeavor (for someone who does a great job of this, see the work of Mark Francis Johnson, like Can of Human Heat). So, my speculative future looks a bit more like taking the realities of today and expanding their scope or intensity, seeing what happens if I kind of blow them up a bit. Climate change became the center of that gesture because I feel that climate change has a massive, noticeable effect on the mental health and sense of belonging of ordinary people today. I mean, we are asking people to attach to and devote themselves to a world that we are simultaneously making less and less available and livable. A lot of good people are doing the work to stop this, but it is still massively affecting. My book attempts to look at some of the psychological influence of climate crises by centering it in this particular fictional individual—his intense life-long anxieties about belonging and attachment, and his relationship to art-making.

With Madness, you wrote as Montes-Torres. What other fictional characters, not created by you, do you currently resonate with or have resonated with throughout your life?

Oh, there’s a ton! I’m really interested in characters, but I tend to be pretty bad at designing them myself. I identify with Finn on Adventure Time, Molina in Puig’s Kiss of the Spider Woman, Ames in Detransition, Baby, and maybe I’ll add Albert from The Bird Cage. As a teenager, I identified with Faulkner’s Quentin, but as an adult, I’ve come to realize how totally fucking weird that is. Some characters I am really interested in but don’t identify with: Laura Palmer of Twin Peaks, Morrison’s Sula, Caleb in The Witch, Stein’s Melanctha, Timothy Hasler of Delany’s The Mad Man, Sondheim’s Bobby, and Scott Thompson’s Buddy Cole of The Kids in the Hall. In terms of character-driven poetry, I’m very committed to Frank of The Book of Frank by CA Conrad and Alette in The Descent of Alette by Alice Notley. Lastly, if I was a Pokemon—a sub-question I hear implicit in your question—I’d be Wooper.

As a current PhD candidate, you’ve undergone many, many years of schooling. Can you share some of your most memorable courses? The good, the bad, and the ugly are all welcome here! (This can include the middle school class that changed your life or some obscure Gender and Sexuality course from university)

Too many years of schooling, and I’m still not done! I would say that Charles Bernstein’s undergraduate course on the Language Poets basically taught me how to be a poet. I mean that without a lick of sarcasm; it was this incredible bootcamp, accompanied by Bernstein’s quasi Lenny Bruce vibe. The worst class ever was probably one of my four high school required religion classes (I went to an all-boys Catholic, you can guess how that went for me). There was one where we basically just watched the worst movies ever (like the Sandra Bullock Crash movie and The Passion of the Christ and Gran Torino) and then did these totally strange and aggressive in-class debates about moral issues. Back to the side of the good: I consider myself very lucky to have taken an early college course with Heather Love, whose approach to gay studies heavily influenced my own.

What are some LGBTQ+ poetry collections you’d recommend? (Bonus points if they do something particularly interesting in terms of form or genre, as you did with Madness.)

Ah, so many. Some classics: The GOAT is Ashbery’s Three Poems, though he famously wasn’t very explicit on gay themes. Any Spicer and Schuyler collections or selections one can get their hands on are essential. The recent selected of Stephen Jonas, Arcana, reintroduces someone really fascinating. Of more recent things, at least from the last 15 years: I love Julia Bloch’s Letters to Kelly Clarkson, which is precisely what it sounds like. Trisha Low’s The Compleat Purge deserves some renewed love, now that we’re out of the post-conceptual digital poetics moment that birthed it. I like Paul Legault’s strange and funny The Emily Dickinson Reader. Zach Ozma’s Black Dog Drinking from an Outdoor Pool is smart and moving. Brian Teare’s Pleasure is careful and divine. Raquel Salas-Rivera’s The Tertiary is so good and so intense. Of new books, I’ve really enjoyed Ricardo Alberto Maldonado’s The Life Assignment and I look forward to the Dionne Brand collected coming from Duke this year.

Lastly, what’s the one line from Madness that you just can’t get out of your head?

I think this one, where Lu describes something a bit abstract about his mental health: “I use the water at the beach as a tuning fork. I flick it and try to set my brain to its pitch.”

“I want no ending,” and Neither Will You: 'Chord' as Continuation and Expansion of Rick Barot’s Exce...
Why Is Lynn Breedlove Freaking Out?
Steven Reigns: Everything on the Table

Willem (he/they) is a student at the University of Chicago studying Gender and Sexuality Studies and Performance Studies.