Radiance on The Other Side of Struggle: Selected Poems of Emanuel Xavier

Radiance on The Other Side of Struggle: Selected Poems of Emanuel Xavier 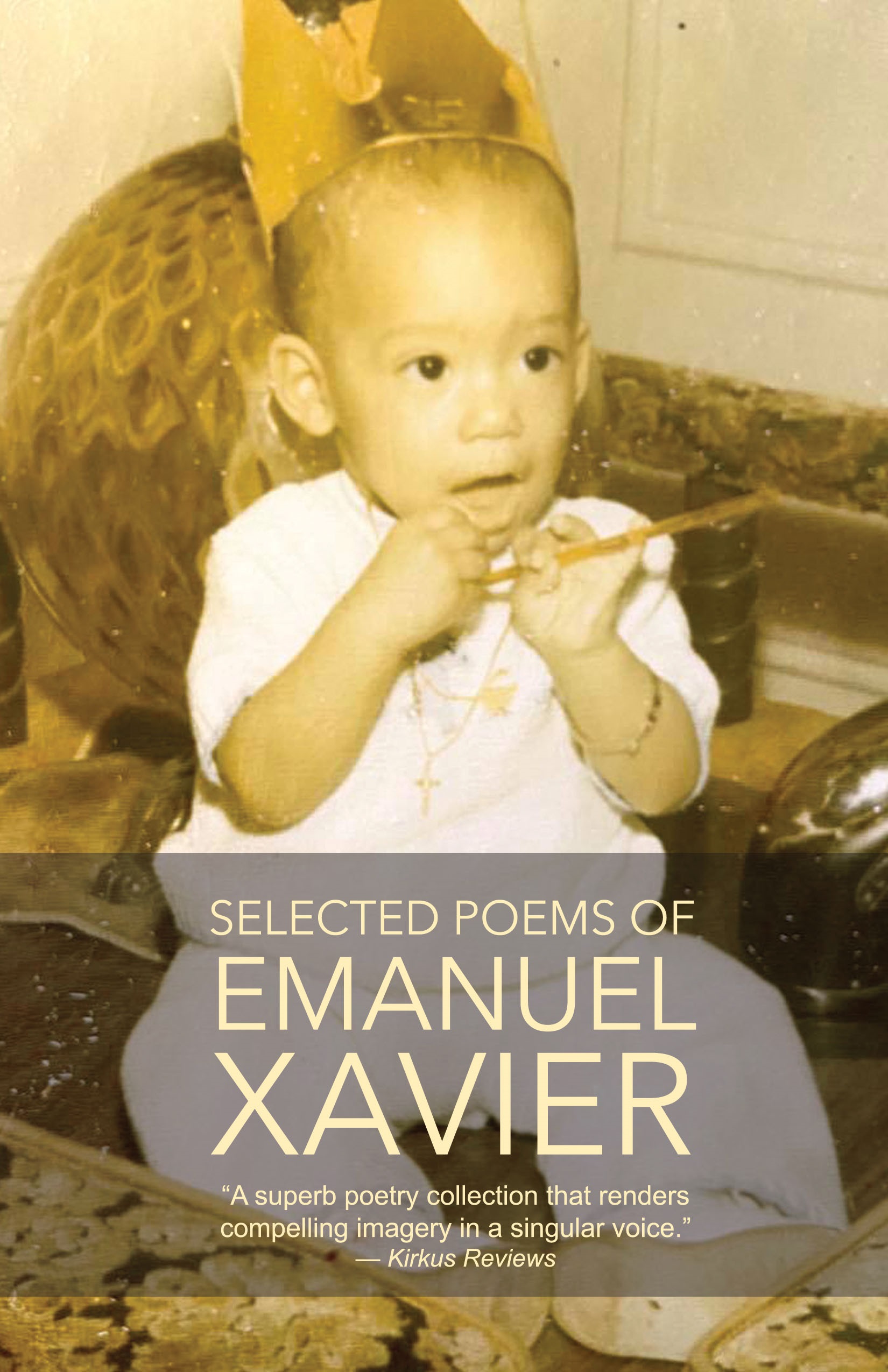 Emanuel Xavier is an icon of queer New York. Since the 1990s, his groundbreaking poetry and performance has animated his personal journey from homeless teen and polemical slam poet to hate crime survivor and award-winning author, while his celebration of the city’s radical Black and Brown subcultures and their embodied vernaculars have found him homes from the House of Xtravaganza to the Nuyorican Poets Café. Xavier is also an important anthologist and curator, whose work builds on the outlaw poetics of the early Nuyorican Poets Café while serving as a crucial bridge to younger generations of queer and Latinx poets. (Full disclosure: I am among the many poets featured in Xavier’s anthologies and reading and performance series).

Being of Puerto Rican and Ecuadorian descent, Xavier brings to his poetry a distinct pan-Latinx sensibility that is rooted in New York traditions yet attuned to the city’s evolving history. As poet, performer, and anthologist, we might compare Xavier to Miguel Algarín, the recently deceased founder of the Nuyorican Poets Café, whom Xavier evokes in the compelling prologue to The Selected Poems of Emanuel Xavier. Algarín understood all these roles as essential to the creation of counter-institutional alternatives for those communities marginalized from the hegemonic city. In this expanded sense, Xavier, more than anyone else, has done the sustained and sustaining work of articulating The Queer Nuyorican, to borrow the title of Karen Jaime’s new and long-awaited critical study, where Xavier is featured prominently.

In our current pandemic moment, we could think of the poems in The Selected Poems of Emanuel Xavier as postcards from a New York City that is no longer, but also postcards to a future city where the poets and queers will find their own ways to hustle and dance and dream together.

Importantly, Xavier is an accessible poet, but one who is unwilling to sacrifice the differences that make up our tangled identities for the sake of legibility or popularity. Blurring page and stage, lyric and narrative, humor and heartbreak, his poetry finds beauty in the most despised, a luminosity or radiance that is the other side of struggle and abjection. I remember attending a House of Xavier event at the Bowery Poetry Club in the early 2000s and loving the fusion of ball culture and poetry slam (“glam slam,” as he called it), but even more so marveling at Xavier’s expansively fabulous notion of community and the radiant convergence of bodies.

One thing you’ll notice about The Selected Poems of Emanuel Xavier, just published by the Queer Mojo Imprint of Rebel Satori Press, is that it’s relatively compact, a slim 71 pages. Whereas some books of selected poems err toward the bulky and encyclopedic, Xavier’s feels essential, concise and purposeful, with a judicious selection by the author himself of standouts from his five poetry collections: the epochal chapbook Pier Queen (1997), Americano (2002), If Jesus Were Gay (2010), Nefarious (2013), and Radiance (2016).

While the book is organized chronologically by collection, it begins with a standalone poem, the defiant “Pulse,” an elegy for the dead in the 2016 Orlando Pulse massacre. Xavier boldly dedicates the poem to the shooter, proclaiming in the opening lines, “We will keep on smiling / From the dancefloor.” Framed this way, it is as if The Selected Poems of Emanuel Xavier is already summoning us off the page to channel the embodied resistance of the dance floor. I am reminded of a funny story from the prologue, where Xavier self-deprecatingly writes “I was also a joke back at the piers as ‘that hustler who thinks he’s a poet.’ The best I could do was print some of my poems as artsy postcards and hand them out at the piers and at the clubs as flyers.” Of course, the joke is on us, as Xavier went on to self-publish Pier Queen and it launched a storied career. In our current pandemic moment, we could think of the poems in The Selected Poems of Emanuel Xavier as postcards from a New York City that is no longer, but also postcards to a future city where the poets and queers will find their own ways to hustle and dance and dream together. Here’s a summary.

Blurring page and stage, lyric and narrative, humor and heartbreak, his poetry finds beauty in the most despised, a luminosity or radiance that is the other side of struggle and abjection.

From Pier Queen, we get “Bushwick Bohemia,” a delicious slice of pre-gentrification life in the author’s native Brooklyn neighborhood; the heartbreaking daddy politics of “Deliverance,” where a hustler is abandoned by his father; and “Nueva York,” a humorous and loving shoutout to a barrio that has become its own enchanted island (“isla del encanto”). We get the slam-era standout “Tradiciones,” with which Xavier would later go global on HBO’s Def Poetry, and where the speaker endeavors to “break tradition / about Latin machismo” and all the inherited forms of racial and sexual prejudice within Latinx communities. Pier Queen also contains the poem “Legendary,” which famously begins “There are Gods amongst us in these ghettos / so black, so fierce, / so brown, so beautiful” and includes the timeless lines “You want realness . . . look at your hands / are they red from the revolution? / or from the blood of your own sisters.”

From Americano, we get the classic title poem’s diasporic evocation of multitudes from the crucible of Ecuador and Puerto Rico as embodied in New York. We get “September Song” and its powerful callout of New York as a city of “corporate orphans and empty beds.” We get the loaded hemispheric politics of “motherland” in “Madre America.”

From If Jesus Were Gay, “Waiting for God” anticipates our present day, confronting police officers while saying a prayer for the dead. “Yeah” has the fabulous line: “Only submissive in bed, and thick-skinned.” The moving AIDS poem “Walking with Angels” concludes: “if there is a God / he has disregarded our prayers.” “Urban Affection” uses the anaphora “We still live in an America” to tap into Walt Whitman’s queer vision of politics from below the spheres of power while seeking to subvert the White imperialist gaze. In the title poem, a queer body politics is polemically written onto the body: “If Jesus were gay, / would you tattoo him to your body?” In the unforgettably fierce “The Death of Art,” which I mention in my book In Visible Movement: Nuyorican Poetry from the Sixties to Slam, Xavier takes on both the Western canon and the commodification of slam poetry, cheekily stating “I am not a poet” over and over, and “I can seriously only tolerate about half an hour of spoken word before I start tuning out,” while still clarifying that “I would fuck somebody up / if I had to.”

From Nefarious, we get the poems that showcase Xavier’s range as a poet, from the elegant tercets of “Runaway,” which imagine a world “where / soft-spoken boys can speak boldly,” to the hilarious, gendered, Spanglish family saga “El Hair Espray,” which is closer to a flash fiction piece or prose poem. While I’ll let the punchlines of “The Thing About My Pussy” speak for themselves, “Step Father” is worth noting for its wrenching reflection on Latino masculinity, which confronts violence and hate but ultimately chooses forgiveness and love, imagining a “somewhere” akin to José Esteban Muñoz’s “then and there” in Cruising Utopia.

In Radiance, we get the illuminations of a mature poet, from the jagged lines of the noir lyric “Broken Window,” which opens “i was once one with the night,” to the somber clarity of “Men Like My Father,” men who “enjoy the softness of my body” and then “they vanish, return to their spouses.” Amid all this chiaroscuro, the anthemic epic “Sometimes We’re Invisible” stands out, its stark naming of dead and wounded queer and trans Latinx people ironically juxtaposed with random news and pop culture headlines yet ultimately giving way to a beautiful summoning: “mariposas/brown lives/queer lives/trans lives / we fly in our dreams.” The book closes with a meditation on the resilience of the titular tree in “Árbol” and with “Beside Myself,” which offers a forceful reflection on the passing of time (“There was a time you were beautiful. / You have become the father you never met.”) and a statement of gratitude for having survived and having found “a man / who loves you in spite of your age and failure,” finally poised between letting go of the past and honoring a life of reinventions to come. It is an apt and powerful conclusion to an essential book by a poet who has so much yet to write but has already given us so much radiance. Here’s to Xavier’s and our loving reinventions.

Divisions and Connections in Queerdom: A Conversation Between Rickey Laurentiis and Darrel Alejandro...
'Philip Sparrow Tells All' by Samuel Steward
'Missed Her' by Ivan E. Coyote