‘Cruising the Movies: A Sexual Guide to the Oldies on TV’ by Boyd McDonald

‘Cruising the Movies: A Sexual Guide to the Oldies on TV’ by Boyd McDonald 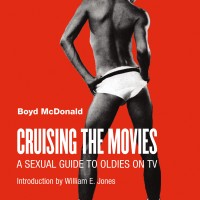 Author-pornographer Boyd McDonald spent most of his life finding ways to anthologize the countless modes in which the gay community exists. To do so, he founded Straight to Hell (S.T.H), an erotic zine-diary that included stories from men in the community, as well as explicit photographs. Spanning between 1940 and 1980, the stories contained within the zine formulated a homosexual identity, a sexual identity that so often crumbles in the face of the heteronormative climate. However irreverent S.T.H. was, it served a purpose that is still necessary today: to destigmatize the gay lifestyle, to depict a sexualized male body that opposes the paradigm and to reconsider the definitional foundations of femininity.

Throughout the 80s, McDonald spent many nights sitting in his living room watching what has come to be known as the “oldies”–films that portray gender as prefixed to a set of behavioral traits. Notorious for his political incorrectness and linguistic boldness, McDonald put together a series of film reviews entitled Cruising the Movies. These texts were originally included in the gay literary magazine Christopher Street between 1983 and 1985.

After a brief but zesty introduction by filmmaker William E. Jones, the book breaks down into four constitutive parts. Readers will enjoy the introduction, which provides a fair contextual assessment of McDonald’s motivations. Jones states “the book ‘is not strictly about movies; it frequently uses them as an excuse for political, social sexual, psychological, biographical, and autobiographical comment.’” In fact, it’s pretty clear that McDonald intended to use the movies as building blocks for a gay identity that popular culture did not nor was interested in providing. As a result, McDonald took the figures of heterosexual life to formulate gayhood.

In his reviews, McDonald identifies fame as that which inspires sexual cravings. For example, if you love an actor, that probably means you want to sleep with him or her, engage in various forms of foreplay, right then and there, as you are watching. But these impulses are not just due to the way the actors look on screen. It has more to do with their body language, the words they use, and the interactions they act out. Body language for McDonald exists in each element of the frame. The shadow that contours an actor’s groin adds to the theatre of sex, fuels the imagination and ultimately turns the viewer on.

To speak of such notions, McDonald mainly refers to early detective movies of the 50s, where gender was very distinctly outlined. The male detective, virile in nature, constantly looks for the other by way of a woman, who is either excessively beautiful and distracting, or bulky, manly and unusual. These three models are what drive the book along. McDonald takes actors like Gary Cooper, Paul Newman, Ronnie Reagan musicians like Eddie Cochran and Elvis Presley; and focuses on the very small details that make up their sexuality. For example, McDonald refers to a scene in Legion of the Condemned (1928), where Gary Cooper is wearing make up. This is perhaps one of the most important parts of the book, or perhaps the part that represents the book the best. At the time, naturally, films were in black and white, and so directors and set designers had to trick the viewers and create color accents that could only be seen from behind the camera. Gary Cooper, who was sexual icon, known for his strong masculinity, is actually wearing lipstick in the scene McDonald describes. As a result, the product of such masculinity is made up of many elements that are categorized as “female” by culture. Masculinity, then, becomes a hybrid of both male and female, and realized through the gender assigned to an object.

Another equally interesting aspect of this work is that these notions of masculinity, unlike one would expect, do not apply simply to men. McDonald seems to believe that masculinity is gender neutral. A woman may have the same masculinity as a man. This is does not imply a value discrepancy. McDonald speaks of Hope Emerson, a stocky 6-foot woman, who, according to him was more of a heterosexual man than other actors.

McDonald truly focuses one’s attention to aspects of films that one would otherwise not notice or maybe even think about. It is so easy to watch these movies and fall into the heteronormative wormhole. McDonald jolts us out of it by constantly talking about groins and thighs and penises and “keisters.” At times, that seems to be all McDonald talks about, but, in the end, they have a proper effect.

And the Winner is...
'Zero Fade' by Chris L. Terry
‘David Bowie Made Me Gay: 100 Years of LGBT Music’ by Darryl W. Bullock

Michael Valinsky is a writer based in New York and Paris. He received his B.A. in Poetics and Praxis at New York University. His work has been published on i-D Magazine, OUT Magazine, Lambda Literary, Kirkus Reviews, Artsy, Surface Magazine, eBay and The WILD Magazine. He is the author of .TXT, Zurich: 89plus/LUMA Publications, 2014. Michael is now the Editorial Assistant at Kirkus Reviews.