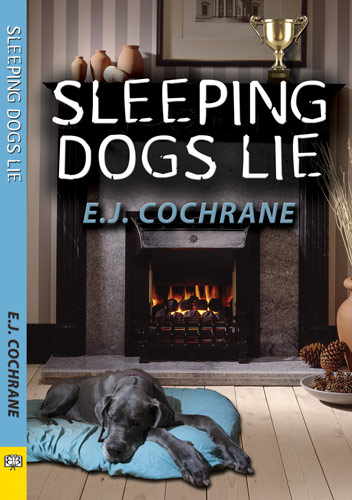 When Matilda Smithwick, Maddie to her friends, owner of Little Guys Pet Care, returns from walking the aptly named Great Dane, Goliath, she finds his owner face down in a pool of blood—and quite dead.

Maddie falls apart when she discovers the body, and poor Goliath goes into a tailspin himself. When Maddie’s first phone call is not to the police, but to her best friend, Dottie, it creates a bit of stir with Detective Fitzwilliam, who puts Maddie on his suspects list. Between Maddie’s unquenchable curiosity and her desire to remove herself from the detective’s list, she can’t help but try to get to the bottom of the murder of Goliath’s owner. Her snooping creates a veritable tornado, forcing Fitzwilliam to insist Maddie butt out. The problem is Maddie can’t seem to stop herself and the detective-in-charge isn’t moving fast enough in Maddie’s estimation.

Trying to figure out who killed Mr. Monk becomes an obsession to the detriment of her dog-walking business. Fortunately, she has well-trained, devoted people in her employ—well, most of them, that is. While Maddie navigates a maze filled with potential suspects, including Goliath’s vet and a group of snobby dog show aficionados, most of whom Maddie finds uncooperative, she also juggles harassment from the unknown killer, a stay in the hospital for her beloved grandmother, Granny Doyle, constant prodding and prompting by her friend Dottie, and an attraction she can’t quite come to grips with in the midst of all the turmoil.

Cochrane has given us an endearing, though somewhat self-deprecating sleuth in Maddie Smithwick. She’s also given us a comical and often annoying sidekick in the form of best friend Dottie, reminiscent of Ellen Hart’s Cordelia Thorne from the Jane Lawless series. In spite of herself, Dottie is an endearing character, especially because she’s loyal to Maddie. These two are definitely a mismatched pair, yet their relationship works.

Granny Doyle is a soothing balm in Maddie’s madcap life, making our concern for Granny’s wellbeing as tension-filled as Maddie’s own anxiety for her. Fitzwilliam is a bit of an unknown, holding his investigative cards close to his chest, but when the lovely Officer Murphy appears at Maddie’s door, we get a little more of a glimpse into what the man is thinking. We also get some complicated emotions from our amateur investigator—both for the officer and for Goliath’s enigmatic vet.

Maddie’s meddling plunges her deeper and deeper into trouble, as happens with most unskilled gumshoes, and just when we think she’s got a handle on the murderer, everything turns topsy-turvy and we’re thrust back to square one. Once Maddie finally does figure it all out, it quickly becomes a tension-filled bit of trouble that we’re not sure Matilda Smithwick can get herself out of.

Sleeping Dogs Lie is an entertaining read. Parenthetical remarks throughout the story make us feel as if we are privy to little secrets about Maddie, her friends, and the subject of her probing.

The most important question of the story, who killed Mr. Monk, is resolved, and true to amateur detective stories with a love interest twist, the resolution of Maddie’s attractions are left open-ended. Perhaps this is an open door for more Maddie Smithwick stories in the future. This offering by E.J. Cochrane is a good first effort. If this story is the introduction of a series with the loveable yet insecure Mathilda Smithwick, it promises to be a delightful one. Sleeping Dogs Lie is a pleasurable read and a delightful escape.

Anna Furtado is the author of lesbian romance (some with mysterious twists and turns) and historical romance, all written with passion and sensuality that sparks the imagination. She’s been an author, columnist, and reviewer for over a decade. Visit her on Facebook at: www.facebook.com/anna.furtado1 and www.facebook.com/annafurtadoauthor/