Jill Johnston died from complications of a stroke on September 18, 2010. Her death was announced September 19 by her wife, Ingrid Nyeboe. Johnston was 81.

For an entire generation of lesbians and feminists, Johnston was a life-altering activist voice: the first out lesbian writing for a newspaper—New York’s Village Voice—that was neither queer nor underground.

Johnston made history by stating that women did not have to be with men sexually nor marry them; in fact, Johnston wrote, to do so would be to collaborate with the enemy, the same patriarchy that promoted and supported the oppression of all women.

According to Johnston, all women were inherently lesbian and just needed to access their lesbian selves by divesting themselves of men.

Johnston was a cultural critic, an advocate of lesbian separatism and she brought one of the major literary sexists of the 20th century, Norman Mailer, to his knees in public. An iconoclast even among iconoclasts, Johnston was out before Stonewall and writing about being a lesbian before it was popular. She was making out in public at literary forums before performance art was even an idea.

She advocated that women leave their husbands, as she had done in 1958. In the sometimes restrictive era of Second Wave feminism, Johnston’s declarations stirred passions: anger and resentment, adoration and fealty. In the burgeoning Second Wave of feminism, to state unequivocally that men were the enemy was considered tactically inappropriate, particularly among feminists who were trying to re-create feminism as a mainstream movement for ostensibly straight women. Johnston’s often outrageous statements made those in the feminist hierarchy, like Betty Friedan (Friedan called Johnston “the biggest enemy of the movement”) and Gloria Steinem, either acutely uncomfortable or secretly thrilled by her antics.

Johnston began writing for the Village Voice in 1959, at the age of 30 and worked there until 1981. She began as a dance critic, but in the halcyon days of 1960s New York City, was encouraged to take on cultural issues as a beat. Her columns, written in all lower case letters and with only sporadic punctuation, had the look, feel, and sound of something urgent, something brewing, something about to erupt. Acutely personal musings, Johnston’s writings were inherently 1960s-style revolutionary text and for the uninitiated, definitively subversive. 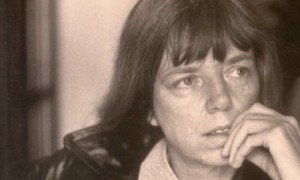 Like many young lesbians of the era, I discovered Johnston while I was in high school. Johnston’s writing was obviously public and yet many considered it dangerous, including the administrators at my high school. Clippings of Johnston’s writings, including her infamous “coming out” column titled “Lois Lane Is a Lesbian,” found in my high school locker were part of the materials used to expel me from Philadelphia High School for Girl for being a lesbian.

Discovering Johnston and her provocative writing was a lifeline for many of us. Her writing was a portal to the new age of open queerness.

In the early 1970s, she was hitting her zenith as both writer and activist. Her openness about her sexuality, her love for women, and how the personal was political was breathtaking, groundbreaking stuff in the early 1970s—and just as highly controversial. Johnston had a confrontational, in-your-face activist style of writing, public speaking, and behavior that pre-dated groups like ACT-UP and Queer Nation by decades.

The now-notorious literary panel disrupted by Johnston at New York’s Town Hall in 1971 was one of the most scandalous events of the feminist movement, later detailed in a documentary (“Town Bloody Hall”). A group of staid feminist lions—the critic Diana Trilling, NY NOW president Jacqueline Ceballos, feminist writer Germaine Greer and then the wild Johnston—took on Norman Mailer and his recently released anti-feminist tome, “The Prisoner of Sex,” in which Mailer took on the role of feminism on male-female relationships.

The Town Hall event started out tame and then became a free-for-all, thanks to Johnston, who used the event to bring her guerilla feminism to a larger audience, which she did—the event was widely written about.
Her first statement set the stage, literally, was when she declared: “All women are lesbians except those who don’t know it yet.”

Then Johnston had a female lover jump onto the stage and began kissing her. A third woman joined them and Johnston mimicked sex on the floor of the stage with the two women, flummoxing Mailer and prompting him to plead, “Come on, Jill, be a lady!”

But Johnston was proving that women no longer had to seek male approval or be “ladies” in public or private.

Mailer was trounced by Johnston’s activist approach. She later wrote about the event and Mailer’s own biographer noted that the Town Hall evening was “one of the most singular intellectual events of the time, and a landmark in the emergence of feminism.”

Women-only communities sprang up around the country with Johnston as their progenitor.

It’s difficult to explain to a post-feminist, post-Stonewall audience how dramatically iconic Johnston’s writing was at the time and what a trail-blazer she was. As Betty Friedan had broken the silence about women’s unhappiness in the middle-class home in “The Feminine Mystique,” in “Lesbian Nation,” Johnston had broken a different code—the one in which women, even closet lesbians, were bound irrevocably to men.

In “Lesbian Nation” Johnston wrote: “Many feminists are now stranded between their personal needs and their political persuasions. The lesbian is the woman who unites the personal and political in the struggle to free ourselves from the oppressive institution [of marriage] …. By this definition lesbians are in the vanguard of the resistance.”

It was heady stuff in those days when marriage to a man was the goal for women and to not be married was somehow to be less of a woman and thus a perennially incomplete person. Johnston’s words were so influential—and unsettling—that her approach to lesbian feminism caused a schism within the lesbian and feminist communities.

Some lesbians insisted on referring to themselves as “gay” to differentiate themselves from the women who followed Johnston, while straight feminists distanced themselves from her and her anti-male rhetoric.

In my essay, “Living Lesbian Nation” in the 2009 Lambda Literary Award finalist “Smash the Church, Smash the State,” edited by Tommi Avicolli Mecca, I wrote about the impact of Johnston on my generation of young lesbians, the first post-Stonewall generation. Johnston gave us permission to be not just out and queer, but outrageously queer. There was no one else like her—she modeled a new out, expansive, no-holds-barred lesbianism for us.

Johnston spent her later years writing about art, dance, literature, politics, and her own life. She published many more books after “Lesbian Nation” and was a book critic for the New York Times and an art critic for “Art in America.”

While her wife asserts that this was the writing of which she was most proud, for many lesbian feminists of the 1960s, 70s and even 80s, Johnston’s manifesto on lesbian separatism was the foundation for all subsequent feminist theory.

She was a pivotal, provocative figure in queer liberation. And as such, an historic icon of the movement for queers civil rights as well as the rights of women.

She is survived by Nyeboe and her two children, Richard Lanham and Winifred Lanham, from an early marriage in 1952 to Richard Lantham, four grandchildren, and two great-grandchildren. Johnston married Nyeboe in 1993 in Denmark after having lived with her since 1980; the couple, who lived in Sharon, Connecticut, married there in 2009.

'Tomorrow’s Parties: Sex and the Untimely in Nineteenth-Century America' by Peter Coviello
Remembering Cheryl B
Chavisa Woods: Beyond the Narrative

Victoria A. Brownworth is an award-winning journalist, editor and writer and the author and editor of nearly 30 books. She has won the NLGJA and the Society of Professional Journalists awards, the Lambda Literary Award and has been nominated for the Pulitzer Prize. She won the 2013 SPJ Award for Enterprise Reporting in May 2014. She is a regular contributor to The Advocate and SheWired, a blogger for Huffington Post and A Room of Her Own, a columnist and contributing editor for Curve magazine and Lambda Literary Review and a columnist for San Francisco Bay Area Reporter. Her reporting and commentary have appeared in the New York Times, Village Voice, Baltimore Sun, Los Angeles Times, Boston Globe, Philadelphia Inquirer, The Nation, Ms Magazine and Slate. Her book, 'From Where We Sit: Black Writers Write Black Youth' won the 2012 Moonbeam Award for cultural & historical fiction. Her new novel, 'Ordinary Mayhem,' won the IPPY Award for fiction on May 1, 2015. Her book 'Erasure: Silencing Lesbians' and her next novel, 'Sleep So Deep,' will both be published in 2016. @VABVOX