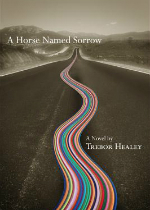 “Jimmy was a song, see? And the song’s over. Let me tell you the story. You read and I’ll hum.”

So begins the poignant and haunting new novel A Horse Named Sorrow (University of Wisconsin) Press written by award-winning author Trebor Healey. In truth, the novel itself is like a literary soundtrack, each chapter is a new song that collectively and effectively underscores the bittersweet and seemingly broken life of our endearing Salinger-like protagonist Seamus Blake.

A Horse Named Sorrow has the musicality of a punk rock anthem; as a reader, you experience the same sensation of seeing your favorite underground band perform live, singing along with the unforgettable lyrics that have defined your youth, while standing in the sea of a mosh pit, where your heart and body are assaulted in every direction.

The novel is unforgettable. The characters are so fully realized, you will feel as if you are reading the transcript of a documentary about the fateful merging of two young lives. Healey delves deep into the fragile psyche of his hero, never once shying away from allowing Seamus to be the flawed twenty-one –year-old he needs to be in order to connect, reflect, and represent.

By setting the novel in 1990 in San Francisco, Healey strikes a beautiful nostalgic chord, reminding all of us who were there and lived it of the meaning and the legacy. He expertly utilizes every inch of history and landscape and allows his setting to become a crucial character in the telling of this incredible tale.

Like many Bay Area romances begin, Seamus Blake meets Jimmy Keane on the platform of a BART station. Within moments, the two young men realize destiny when they see it. Healey makes the smart choice of not basing their attraction merely on lust, but on intellect and camaraderie, providing the reader with a similar reaction Seamus predicts his roommates will have when he brings Jimmy home with him: They wouldn’t read him as a one-night stand, no sirree.

Jimmy soon confesses to Seamus: I got it. Even though Healey doesn’t define the acronym, we, as readers, see the writing on the wall. The clock for these two lovers is ticking, and fast. The stakes are high because we know their love is deep and real; they are a rarity and we root for them, for their survival. We soldier along the journey Healey is taking us on, knowing the outcome by a few chapters in, but hoping for Seamus’ heart to mend.

Along with his masterful command of poetic language, Healey’s unquestionable strength lies in the clever structure of the novel. Seamus’ present is perfectly paralleled with his immediate past. Fulfilling Jimmy’s request to take me back the way I came, Seamus embarks on a cross-country sojourn, riding Jimmy’s memory-adorned bicycle in an attempt to retrace the miles that led Jimmy from a life in Buffalo to that fated moment when they met on the train station platform. Accounts of this life-changing journey are alternated with chapters in which more and more about Jimmy and Seamus’ all-too brief affair are revealed.

Not since Martin Hyatt’s exquisite novel A Scarecrow’s Bible has a novel of this resonating caliber emerged on the literary scene. Powerful is an understatement. What Healey has created here is a new classic in literary fiction, along the lines of On the Road and Giovanni’s Room, which will echo in the heart of his readers like the fading encore of the perfect song.

David-Matthew Barnes is the bestselling author of twelve novels, including five young adult novels. He is the author of over forty stage plays that have been performed in three languages in eight countries. His work has appeared in over one hundred publications. He teaches college courses in writing, literature, and the arts.