Looking at ‘In Cold Blood’: Violence, Masculinity, and Compassion

Looking at ‘In Cold Blood’: Violence, Masculinity, and Compassion 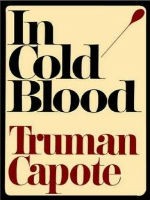 My interest in violence is organic and manufactured like the testosterone I inject, the metallic fact of the needle I push into my thigh every Thursday. It’s socially enabled, like the startling effect my male body has on other men: the locker room size-ups, the threatened exes, the shoulder-swiped near-fights on the train. It’s relational as my own brush with death at the hands of a man who later went on to shoot two other men and kill one, or the father who modeled the worst kind of masculinity: predatory, crushing, anxious. Whatever the tangles—and maybe I’ll never fully understand, as much as I try to excavate and map, my own heart—what I do know is that my memoir, Man Alive (City Lights Books), which explores the way violence can be gendered and also undone by queering gender, owes its lineage to Truman Capote’s brilliant, chilling true crime classic, In Cold Blood.

For the uninitiated, Capote’s 1966 work was originally serialized to wild acclaim in the New Yorker and is a beautiful, epic piece of literary nonfiction that details the 1959 murders of four members of the Clutter family of Holcomb, Kansas. Legend has it that Capote—fey, bowtied, tiny—read a 300-word New York Times story about the killings and traveled to Kansas accompanied, cinematically, by his good friend Harper Lee, to chronicle the search for the murderers and the effect the killings had on the town. Ultimately the two men responsible for the murders were captured and Capote spent six years on the book, forming a particularly close relationship with one of the accused, Perry Edward Smith, in the process. His portrayal of Smith is nuanced, almost affectionate, and, in many ways, deeply queer—a fact that caused rumors about the nature of their friendship even at the time.

I don’t believe the two men had an affair, but the fact of Capote’s identity, to this reader, is the lens that allows for a more complex, humane layer in a story that could easily have been reduced, normatively, into villains and heroes. Capote brings an ephemeral sympathy for the outsider, distinctive but not cloying, that asks us to see ourselves in Perry’s miserable life.

In one particularly poignant scene, Capote describe the recurrence of a lifelong dream Perry has while in prison: “Throughout his life—as a child, poor and meanly treated, as a foot-loose youth, as an imprisoned man—the yellow bird, huge and parrot-faced, had soared across Perry’s dreams, an avenging angel who savaged his enemies or, as now, rescued him in moments of mortal danger: ‘She lifted me, I could have been light as a mouse, we went up, up, could see the Square below, men running, yelling, the sheriff shooting at us, everybody sore as hell because I was free, I was flying, I was better than any of them.’”

Growing up, my biggest fear was that I’d become my father. The reality that I was actually a transgender man forced me into a crucible I’d never have chosen otherwise: at 30, as I grew ever hairier and muscular, as my voice dropped and I passed like a ghost through locker rooms and confused men in gay bars with my dissonant presence, I had to make peace with the shadows and ghosts that bruised every pronoun, every “sir,” every gesture of fraternity, every woman who crossed a lonely street to avoid crossing my path late at night.

The first year of my transition I monitored myself, alert to secret signs of impending evil, as if a blooming would accompany the testosterone shots—a secret, psycho gene just waiting to turn me into a boogie man. It was in this edgy borderland that I re-read In Cold Blood and wrote most of Man Alive. I waited for my worst self, resigned like a guy with a rifle watching the door in a horror film, out-powered perhaps but not going down without a fight.

There’s no doubt that Capote and his wild, dark book changed literary history. Many critics believe it popularized, if not fully created—the nonfiction novel. Even the critiques of his work are familiar to anyone working in this genre today—accusations of fabricated scenes or dialogue, places where facts are sacrificed to the gods of larger narrative. But for this writer, Capote’s effort here—tight, dark, sharp, kind—is cause for celebration for another reason entirely: its bravery. In Cold Blood taught me that I could dive into my shadows, face my would-be killer, plumb my heart for the kind of compassion that the worst kind of men never gave me, and find myself there. I’m not sure what Capote went looking for in Kansas exactly, but it’s impossible to not see his tenderness toward Perry, the kind of open heart that results from being vulnerable enough to identify with and integrate your most shadowy self, and to make room for the multitudes of others in that harrowing process.

I can’t speak for Capote, but the tilt of my masculinity, the outsider nature of my view, gave me access to both a deeper empathy and a broader lens for the world around me. In one of his pretrial hearings, my mugger and I made eye contact and I believed, for just a moment, that he recognized me. I held his gaze, I tried to see the humanity there. I’m not, as it turns out, my father’s son and here’s why: I knew, in that moment, that it was the least I could do. It’s just the kind of man I am. I’d never have known if I hadn’t been willing to look.

Thomas Page McBee's memoir, Man Alive (City Lights), is forthcoming this fall. He writes the column Self-Made Man for the Rumpus and the new series The American Man for Pacific Standard. His writings on gender have appeared in the New York Times and via TheAtlantic.com, VICE, BuzzFeed, and Salon. Thomas gives lectures on masculinity and media narratives across the country. He lives in New York City, where he is the special projects editor at Quartz.