Read an Excerpt from John Rechy’s ‘After the Blue Hour’

Read an Excerpt from John Rechy’s ‘After the Blue Hour’ 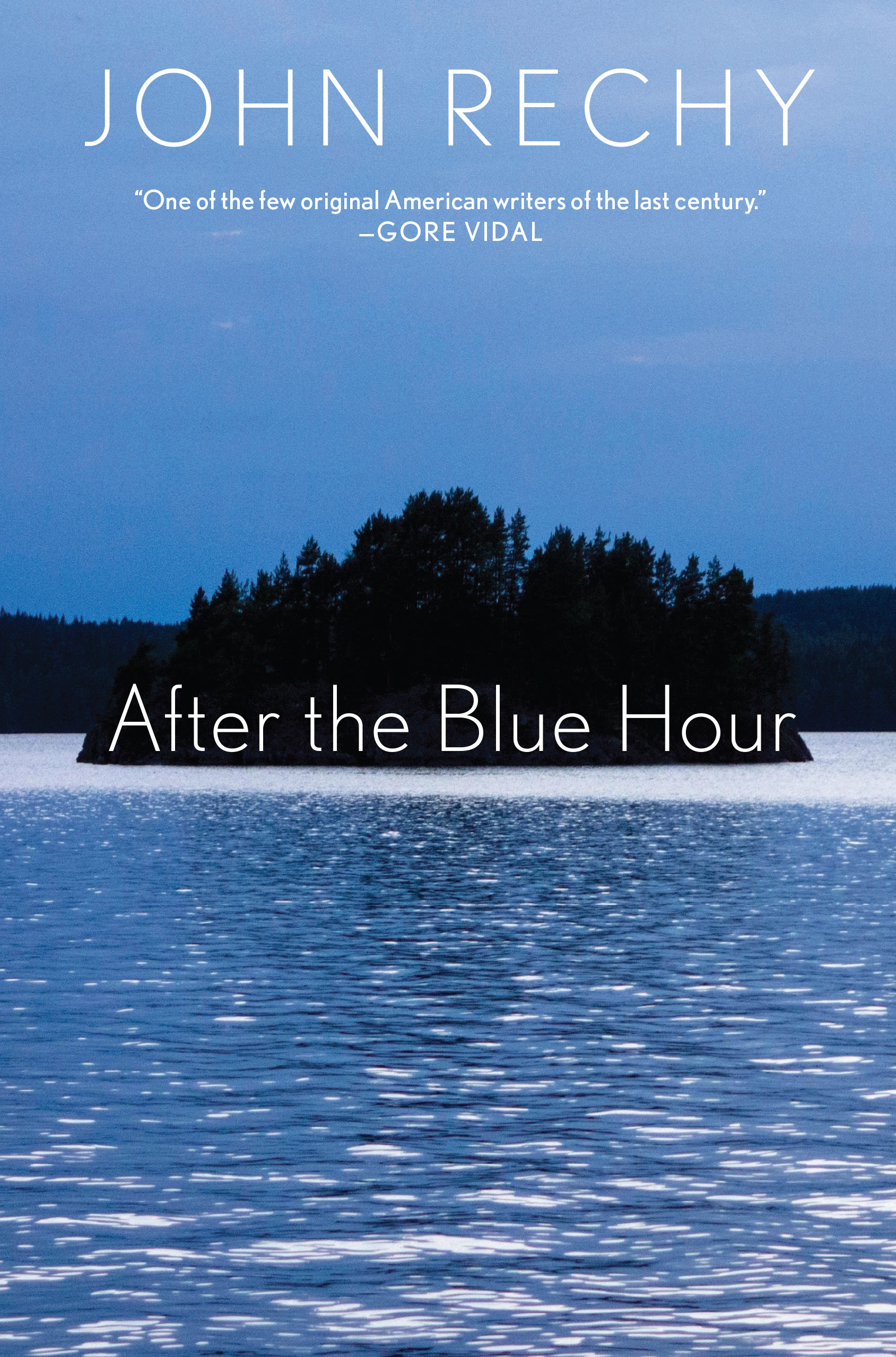 Last month, Grove Press released After the Blue Hour, a new novel from acclaimed author John Rechy. Set on a luxurious private island in the summer of 1960, the book is a hothouse tale of sexual gamesmanship.

The author’s most daring work, ‘After the Blue Hour’ is narrated by a twenty-four-year-old writer named John Rechy. Fleeing a turbulent life in Los Angeles, he accepts an invitation to a private island from an admirer of his work. There, he joins Paul, his imposing host in his late thirties, his beautiful mistress, and his precocious teenage son. Browsing Paul’s library and conversing together on the deck about literature and film during the spell of evening’s “blue hour,” John feels surcease, until, with unabashed candor, Paul shares intimate details of his life. Through cunning seductive charm, he married and divorced an ambassador’s daughter and the heiress to a vast fortune. Avoiding identifying his son’s mother, he reveals an affinity for erotic “dangerous games.” With intimations of past decadence and menace, an abandoned island nearby arouses tense fascination over the group.

Even though he stood in the hot, congested airport among bodies squirming and sweating and hurrying to claim their luggage before anyone else, I determined that the imposing man, now walking toward me, was my host, a handsome man, probably in his mid-thirties, dressed casually—khaki slacks, a pale-blue shirt. He wore dark sunglasses. I had not anticipated such an attractive man, and I had imagined an older man.

“John Rechy,” I introduced myself, holding out my hand.

“Paul.” He took my hand firmly.“Paul Wagner. It’s good to meet you.”

He removed his sunglasses. His brown hair—the color of his eyes—was sun-tinted. His skin was deeply tanned. He was tall. Two open buttons on his shirt indicated a toned body, slender, like that of a swimmer. It pleased me that I, too, had left two revealing buttons open on my shirt.

I responded to a flash of competition by quickly evaluating him further: He was taller than I; but, having worked out for years, I was more muscular. Of course he had a deeper tan from being on his island; I would catch up fast. I was dressed in my own usual style—faded jeans, Levi’s; a somewhat form-fitting blue denim shirt; and short-cut Wellington boots. Our different styles of dressing obviated any competition in that area. I relaxed, feeling secure.

I spotted my duffel bag and retrieved it from the luggage belt.

“Shall we get help?” he offered.

“No, of course not.” I slung the duffel bag over one shoulder, as I had when I was in the army. We moved ahead, out of the airport lobby and into an ambush of ferocious heat under a white scorched sun. Even within the shade of the parking lot, the heat barely relented.

My host, Paul, opened the back of a new station wagon. I flung my duffel bag in. When he started the car, the air- conditioning rushed at us in a chilly wave.

“You’re a talented writer, you must know that,” he said, as if to assert quickly that I had been invited as a writer he admired, perhaps at what he might consider the inception of a promising career.

“Have you had lunch?” he shifted the conversation swiftly.

“Something terrible on the plane.”

He laughed—“Of course”—as we approached a roadside restaurant, and he parked in the lot beside it.

“It’s an unnecessary meal,” he agreed, “but maybe something cold?”

We went into the restaurant, one of those chromey coffee shops that look alike and are situated on the outskirts of cities, villages really.

A heavyset waitress led us to a booth. The way she looked at us, an unconventional couple, suggested some kind of interest or curiosity.

After we had both ordered—a dutiful sandwich, which, when it arrived soon afterward, was limp, and iced tea, since wine was served only at dinnertime—Paul said:

“My son is joining us on the island. He’s on holiday from school. Sonya, my intimate friend, is already there.”

A reference to his son, and the pointed reference to an “intimate friend,” a woman, made me wonder whether he was indicating at the outset of our involvement that he was not homosexual (the word “gay” was still only beginning to filter into the language). If that had been his intention, his evidence was not decisive. From several experiences, I knew that such an assumption, based on marriage and having children, was not strictly warranted; I’d had several sexual connections with married men, most otherwise closeted.

Paul asked me with abrupt directness about my use of first-person narration in my writing. “Your experiences, autobiographical—all true?”

“All true? I think autobiographers are big liars.”

“You can’t trust what you remember, can you? Memory is too unreliable to be ‘truthful.’”

Man. Surely he had used that word, so incongruous for him, to assert some affinity with what he must have considered was the language of “the streets” I had written about.

“Do you prefer fiction?” he added.

“It’s more honest in its disguise…man,” I said, feeling odd to address him in that way, but deciding to accept his borrowed tone.

“I think the camouflage of fiction allows more authenticity—you know, acknowledging that it is a ‘fiction,’ a terrific lie, and that you want it to be believed.”

I didn’t like being graded. If that continued, I’d object; and eventually I would become used to the way he changed subjects randomly, perhaps following shifting thoughts; and I would soon find out that the subject of experience, now only implied, would recur in startling questions and revelations between us, not yet, but soon.

I took out my wallet to pay for my lunch.

“No, please”—he placed his hand on mine to emphasize his insistence—“you’re my guest.”

Asserting control? If so, I would deal with that—I was intent on creating a level field in my relations with him, whatever they might turn out to be.

As we were about to walk out, the waitress moved hurriedly to delay our exit. She asked Paul: “You the folks on the island?”

“The kid still there talkin’ stuff?” She had rushed her words as if to make sure she would speak them.

Paul did not answer.

No doubt she was referring to his son; it was not a friendly inquiry, and Paul had pointedly ignored her.

Back in the car, Paul said: “My son, Stanty—that’s his nickname; he prefers it because he hates his real name—I’ve told him about you, and he’s excited to meet you. You’ll like him. He’s exceptional, and he’s an expert swimmer. I warn you, he’s very competitive.”

That was a competition I wouldn’t invite, swimming with his son or him. I had never learned to swim. “How old is Stanty?”

Fourteen! From what he had said of the boy’s excitement at meeting me, I had assumed someone older. What had this boy been told about me to arouse his expectations? Oh, of course, his son would want to be a writer; and if he was fourteen, then Paul would probably be older than I had thought, perhaps in his forties, the early forties. He had the exceptional good looks that some handsome men retain, appearing younger.

We drove several miles through a leafy area out of the quaint village.

“When I read your stories I felt—I know what it’s like to live by one’s wits. That’s how I’ve lived my life, my adult life,” he said.

I was sure he was not referring to the kind of hustling that I knew, street and bar hustling that I preferred because of the blunt directness I considered honest.Although he had relegated that association to his “adult life,” I chose not to respond with any welcome of kinship, which I seldom, if ever, felt or courted.

He parked in a cleared space at the edge of a sprawling lake.We walked out of the car onto powdery dirt, like beach sand. Trees lined the inland shore; they were vivid green, not scorched by the sun. There was not the slightest rustling of their leaves, not a whisper of a breeze. Two rowboats were secured to a post next to two motorboats.The water, pristine, almost crystalline, was so calm, the day so traumatized with heat, that the boats made no movement on the lake.

He had shouted those two words—startling me—as he looked out to the distance.

“Island! Island!” came a distant answer from the lake. “Island…?”

“That’s what Stanty first said,” he laughed, “when I brought him here the first time. He said it was as if we were entering a world that was his and mine. We signal to each other that way.”

I grabbed my duffel bag before he could and shoved it onto a motorboat.

“Just out of the army?” he asked me, nodding toward the duffel bag as we boarded the boat.

The motorboat moved smoothly along the water, stirring it up in double fans of foam. The island we were approaching was lush shades of green, clusters of trees, a green oasis. The house on it was large, split into two wings jutting out on the lake like arms welcoming, or clasping.

My eyes wandered away, gauging the breadth of the lake. A distance apart was another island. It looked abandoned. The sun cast only gray patches on it as if avoiding it.

“That island,” Paul said over the sound of the motorboat, which he was guiding expertly, “is vacant.”

“For sale?” I asked. Even from afar, it looked neglected, left to die.

“Nothing,” he said. But still gazing in its direction, and quietly as if speaking out his thoughts, and—this occurred to me—as if quoting memorized words, he said: “What happens to evil when its flames are snuff? Does it wait to spring out?”

He looked away from the distant island. He laughed. His tone turned ironic, parodying his own words:“That lofty shit, man—it stuck with me from a crazy book I was reading. No, I’m not a religious crank, not religious at all.”

“I’m relieved,” I said, and I was: I had thought perhaps his invitation had been sent with a desire to “purge” me of imagined sins gleaned from my stories. I was glad to accept his explanation, much more consistent with the man I was with. I could agree with his disdain for religion. Born into a Catholic family, I had long since abandoned any religious connection. There was this, too, that I was ready to welcome: For long stretches of time, on the streets, I had pretended that I was not smart, only street-smart; that was widely preferred by those who picked up a type of hustler that I represented, which included an emphatic, even strained, masculinity. I had played that role, while often missing the part of myself that was smart, that welcomed intelligent conversation. This brief interlude with Paul had already released me from that restrictive role. I stared at the neighboring island, now even more shad- owed as the setting sun withdrew more light.Yet even in its drabness, it seemed dormant, as if waiting for a new tenant to resurrect it, or entirely destroy it.

“You come here every summer?”

We reached the dock. I got out and heaved my duffel bag over my shoulder while he fixed the boat in place. He smiled, a friendly smile.“Welcome to the island,” he said.

Island, island! I thought. That exclamation remained echoing, curious despite Paul’s explanation. It sounded more like the urgent exclamation of a drowning man.

AFTER THE BLUE HOUR © 2017 by John Rechy. Reprinted with the permission of the publisher, Grove Press, an imprint of Grove Atlantic, Inc. All rights reserved.