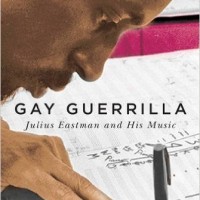 Winter is here, bringing with it a slew of new books to enjoy.

Music aficionados rejoice! This month, University of Rochester Press is releasing Gay Guerrilla: Julius Eastman and His Music by Renée Levine Packer and Mary Jane Leach, an overview of the life and work of the postmodern composer Julius Eastman.

Composer-performer Julius Eastman (1940-90) was an enigma, both comfortable and uncomfortable in the many worlds he inhabited: black, white, gay, straight, classical music, disco, academia, and downtown New York. His music, insistent and straightforward, resists labels and seethes with a tension that resonates with musicians, scholars, and audiences today. Eastman’s provocative titles, including ‘Gay Guerrilla, Evil Nigger, Crazy Nigger’, and others assault us with his obsessions. Eastman tested limits with his political aggressiveness, as recounted in legendary scandals he unleashed like his June 1975 performance of John Cage’s Song Books, which featured homoerotic interjections, or the uproar over his titles at Northwestern University. These episodes are examples of Eastman’s persistence in pushing the limits of the acceptable in the highly charged arenas of sexual and civil rights.

In addition to analyses of Eastman’s music, the essays in ‘Gay Guerrilla’ provide background on his remarkable life history and the era’s social landscape. The book presents an authentic portrait of a notable American artist that is compelling reading for the general reader as well as scholars interested in twentieth-century American music, American studies, gay rights, and civil rights.

University of Chicago Press is releasing Philip Sparrow Tells All, a collection of essays from sexual renegade Samuel Steward, edited by Jeremy Mulderig:

Samuel Steward (1909–93) was an English professor, a tattoo artist for the Hells Angels, a sexual adventurer who shared the considerable scope of his experiences with Alfred Kinsey, and a prolific writer whose publications ranged from scholarly articles to gay erotica (the latter appearing under the pen name Phil Andros). Perhaps his oddest authorial role was as a monthly contributor between 1944 and 1949 to the ‘Illinois Dental Journal’, an obscure trade publication for dentists, where writing as Philip Sparrow he produced a series of charming, richly allusive, and often quirky essays on a wildly eclectic assortment of topics.

In ‘Philip Sparrow Tells All’, Jeremy Mulderig has collected thirty of these engaging but forgotten columns, prefacing them with revealing introductions that relate the essays to people and events in Steward’s life and to the intellectual and cultural contexts in which he wrote during the 1940s. In these essays we encounter such famous friends of Steward as Gertrude Stein, André Gide, and Thornton Wilder. We hear of his stint as a holiday sales clerk at Marshall Field’s (where he met and seduced fellow employee Rock Hudson), of his roles as an opera and ballet extra in hilariously shoddy costumes, of his hoarding tendencies, his disappointment with the drabness of men’s fashions, and his dread of turning forty. We go along with him to a bodybuilding competition and a pet cemetery, and together we wander the boulevards of Paris and the alleys of Algiers. Throughout, Mulderig’s entertaining annotations explain the essays’ wide-ranging allusions and also highlight their gay subtext, which constituted a kind of private game that Steward played with his mostly oblivious audience of Midwestern dentists.

When sculptor and author Barb Davis is given an NEA grant to pair original feminist sculptures with searing first-person essays about transitions in women’s lives, she organizes a two week writing retreat with some of the best, brightest, and most notorious lesbian authors in the business. In between regularly scheduled happy hours and writing sessions, the women enter a tournament bass fishing competition, receive life coaching from a wise-cracking fish named Phoebe, and uncover a subterranean world of secrets and desires that is as varied and elusive as the fish that swim Vermont’s Lake Champlain.

In the mood for love? Bold Strokes Books is releasing Brothers, a new romance novel from writer Ralph Josiah Bardsley:

At twenty-three, Jamus Cork’s plans are simple—graduate college, stay in New York City, and write. But those plans change when his parents are suddenly killed and he finds himself the guardian of his little brother, Nick. Jamus ends up back in the Boston neighborhood where he grew up, with a crying toddler on his knee and the challenge of building a new life for himself and the boy. Jamus somehow finds a way to navigate the ups and downs of single parenting, but over a decade of raising Nick, Jamus never truly overcomes his struggles with loneliness and the guilt he feels as the sole survivor of the crash that killed his parents. That changes when he meets bookishly handsome Sean Malloy. There’s a spark between the two men, but both must face down their own private demons to find love in the Irish enclave of South Boston.

In Francis Bacon in Your Blood (Bloomsbury) writer Michael Peppiatt details his relationship with the iconic painter Francis Bacon:

In June of 1963, when Michael Peppiatt first met Francis Bacon, the former was a college boy at Cambridge, the latter already a famous painter, more than thirty years his senior. And yet, Peppiatt was welcomed into the volatile artist’s world; Bacon, considered by many to be “mad, bad, and dangerous to know,” proved himself a devoted friend and father figure, even amidst the drinking and gambling.

Though Peppiatt would later write perhaps the definitive biography of Bacon, his sharply drawn memoir has a different vigor, revealing the artist at his most intimate and indiscreet, and his London and Paris milieus in all their seediness and splendor. Bacon is felt with immediacy, as Peppiatt draws from contemporary diaries and records of their time together, giving us the story of a friendship, and a new perspective on an artist of enduring fascination.

'Naamah' by Sarah Blake
'Flat: Reclaiming My Body from Breast Cancer' by Catherine Guthrie
'Theatre of the Unimpressed: In Search of Vital Drama' by Jordan Tannahill