‘We are the Ants’ by Shaun David Hutchinson

‘We are the Ants’ by Shaun David Hutchinson 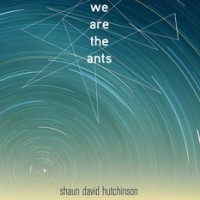 Henry Denton’s life is not going well. He’s grieving for his boyfriend, who committed suicide last year. His interactions with his family are strained by his mother’s exhaustion from working two jobs and his brother’s impending teen fatherhood. So, you can imagine the strain it puts on him when the aliens (who Henry affectionally nicknames “the sluggers”) who have been occasionally abducting him give him the option of saving the world or letting it be destroyed. No sweat, right? Except…why on Earth (pun totally intended) would Henry save a planet on which he and everyone he loves is suffering so greatly from such a wide range of various tortures?

At school, things are also pretty crappy. He is, predictably, not well liked or popular because unfortunately when the sluggers return him to Earth, he is often found wandering naked on the outskirts of town. Because of this, he has earned the nickname “space boy.” Space Boy hooks up with Marcus, who is everything that Henry isn’t–popular, athletic, and deeply closeted. Outside of their trysts, Marcus bullies Henry like everyone else. Their hookups make Henry feel marginally less alone, but fill him with shame and self-loathing, something that no queer teen really needs help with.

Enter Diego Vega–the new kid who befriends Henry in spite of himself. Diego is a question mark in Henry’s complicated life. Is it worth investing in a new friendship, when the world is going to end in 144 days, anyway? Henry’s internal dialog is surly, sarcastic, hilarious, and exactly on point for a misunderstood teenager. A lot of the suspense in We Are The Ants centers around not just Henry’s dilemma, but in how, exactly, the world ends. Meteor? Blasted into pieces? Plague? Death of the Sun? Supervolcano? Pollution? Nuclear war? The book is peppered with occasional chapters that explain how things might go down, each as unlikely as the next. It’s a really smart way to play with perspective. Henry (like most teenagers) is wrapped up in his own substantial problems; as a passenger to his train of thought, the reader is too. It’s easy to get wrapped up in the character’s personal issues, but in relation to the bigger picture, they don’t seem as overwhelming.

Ultimately, this is a book about more than love and loss; it’s about struggling to find motivation and not taking the people in your life for granted. None of the characters think they’re bad people, even though some of them do terrible things. They’re complex and nuanced the way we don’t get to see in real life, watching people’s layers unfold . The science fiction element of the story is soft enough that even people who are dissuaded from genre reading will be able to get into the story. And while one of the characters is grappling with his sexuality, this well-written novel sidesteps a lot of common tropes like coming out and will-they-or-won’t-they romance. I couldn’t tell you if the word “gay” even appeared in this book. Denton’s a sullen kid with emotional baggage and a big decision to make. But his sexuality is incidental–and that’s huge. It’s a gay novel only in that the main character and the author both identify as queer. But the crossover appeal is undeniable. People who like YA, science fiction, or coming-of-age stories will all find something to love about this book.

Oh, and the ending? Brilliant. It’s the sort of thing that I was vaguely irritated with at first, but the more I thought about it, the more I realized that there’s no other way it could have ended. Overall, a beautiful, masterfully told story by someone who is at the top of his craft.

'Like a Love Story' by Abdi Nazemian
Katherine V. Forrest on the Book that Changed Her Life
A Poem by Adam Fitzgerald