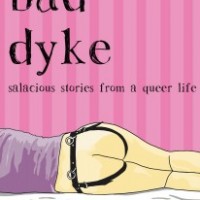 Allison Moon is a queer woman with a bisexual boyfriend or a “bad dyke”–an identity she’s settled on after stints as a “greedy bisexual” and a garden-variety lesbian. She chronicles and analyzes this journey in an essay collection that’s heartfelt, thought-provoking, and good, not so clean fun.

In the book’s first essay, “The Skinny,” Moon writes of dipping her teen toes in Sapphic waters with the lovely Tania. She describes the passion, wonder and excitement of their love in poetic detail: “Her lips were like a velvet overstuffed sofa,” she writes. “I wanted to curl up on them and nap.” But the rose-colored glasses are off once Moon discovers that Tania likes the violent “Stan” by Eminem and has low self-esteem. And though the author does an excellent job revealing Tania’s tragic flaws and discussing the end of their relationship, I would have liked to have seen more of Tania’s personality, specifically those aspects that attracted Moon in the first place.

The energy from my orgasm shot out of my body, down the branch, down the trunk and into the earth. Then the earth returned it with amazing fervor, up the trunk and up the branch and into my body. … I found a forked branch and I lay back on it . … I wrapped my legs around the trunk, and I felt the tree’s excitement again.

“You are insatiable,” I said to the tree.

She also writes well about gender identity. In the essay “Good Dyke,” she puts on a soft packer, binds her breasts, cuts her hair and takes the whole look outside. “The sidewalks were just as empty as before,” she writes, “but this time I strode proudly. I loved the heft I felt in my underwear and the lightness on my nexk and chest.” The joy the author feels at coming into her own is contagious.

One essay finds Moon asking future boyfriend Reid whether his penchant for gay women still makes those women lesbians. Unlike other men who thrill at the idea of “turning” a woman straight, Reid is in possession of a refreshingly open mind: “Their identities are their own,” he says, “influenced by far more important things than my dick.” Still, Moon wonders whether she should be with him or not.

The last essay, “7 Year Itch,” updates us on their relationship. Moon explains how she is loved by Reid for “my hairy armpits, my slouchy style, my shaved head, my penchant for packing.” These two are absolutely determined to make their relationship queer–even though they look to all the world like a hetero couple–and you can’t help but admire them for that. This is the best type of non-fiction sex writing–the kind that makes you question a lot of things you thought you knew.

Bad Dyke is pretty short as far as books go, but even in such a small space, Moon manages to convey an impressive amount of information and emotion. Some of the essays are less interesting than others, but overall, this book’s a winner, a fantastic marriage between a one-of-a-kind narrator and an irresistible story. Moon is extremely charismatic, the kind of person you want to be instant best friends with, and highly observant of her own life. She understands how even the smallest of experiences can change you and shows that following your heart is what’s most important, even if it makes you look bad in the eyes of others.

Gena Hymowech is a writer who has contributed to over 50 publications, including the New York Post, AfterElton.com, and Gay City News. genahymowech.com