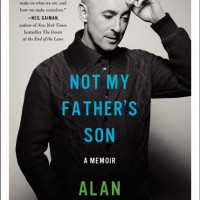 New month, new books! Fall is upon us, and so are a slew of new and noteworthy LGBT books.

In his unique and engaging voice, the acclaimed actor of stage and screen shares the emotional story of his complicated relationship with his father and the deeply buried family secrets that shaped his life and career.

When television producers in the UK approached him to appear on a popular celebrity genealogy show in 2010, Alan enthusiastically agreed. He hoped the show would solve a family mystery involving his maternal grandfather, a celebrated WWII hero who disappeared in the Far East. But as the truth of his family ancestors revealed itself, Alan learned far more than he bargained for about himself, his past, and his own father.

With ribald humor, wit, and incredible insight, Alan seamlessly moves back and forth in time, integrating stories from his childhood in Scotland and his experiences today as a film, television, and theater star. At times suspenseful, deeply moving, and wickedly funny, Not My Father’s Son will make readers laugh even as it breaks their hearts.

In 1892, America was obsessed with a teenage murderess, but it wasn’t her crime that shocked the nation—it was her motivation. Nineteen-year-old Alice Mitchell had planned to pass as a man in order to marry her seventeen-year-old fiancée Freda Ward, but when their love letters were discovered, they were forbidden from ever speaking again.

Freda adjusted to this fate with an ease that stunned a heartbroken Alice. Her desperation grew with each unanswered letter—and her father’s razor soon went missing. On January 25, Alice publicly slashed her ex-fiancée’s throat. Her same-sex love was deemed insane by her father that very night, and medical experts agreed: This was a dangerous and incurable perversion. As the courtroom was expanded to accommodate national interest, Alice spent months in jail—including the night that three of her fellow prisoners were lynched (an event which captured the attention of journalist and civil rights activist Ida B. Wells). After a jury of “the finest men in Memphis” declared Alice insane, she was remanded to an asylum, where she died under mysterious circumstances just a few years later.

In Extraordinary Adventures of Mullah Nasruddin: Naughty, Unexpurgated Tales of The Beloved Wise Fool from the Middle and Far East (Lethe Press), editor and writer Ron Suresha has assembled a collection of risque Turkish folk tales, many of which were “suppressed for centuries.”

Author Suresha has done extensive travel and research to unearth, translate, and retell these authentic centuries-old stories from Turkey, the Levant, Eurasia, and around the globe. In addition to dozens of droll popular and proverbial tales not included in the first volume, many ribald and naughty Nasruddin narratives, previously suppressed for moralistic reasons, explore taboo themes

These outrageous, hilarious, and thought-provoking tales depict the bumbling, brilliant Mullah as he interacts with his wife, family, donkey, village community, and strangers during his everyday journeys. Storytellers, folklorists, comedians, wisdom seekers, and mature readers who love to laugh will be amused and amazed by this unadulterated account of the truly Extraordinary Adventures of Mullah Nasruddin.

Young love is never easy, especially if you are queer. This month, Ooligan Press is publishing Forgive Me If I’ve Told You This Before by Karelia Stetz-Waters, an accounting of the highs and lows of high school romance.

Shy, intellectual, and living in rural Oregon, Triinu Hoffman just doesn’t fit in. She does her best to hide behind her dyed hair and black wardrobe, but it’s hard to ignore the bullying of Pip Weston and Principal Pinn. It’s even harder to ignore the allure of other girls. As Triinu tumbles headlong into first love and teenage independence, she realizes that the differences that make her a target are also the differences that can set her free. With everyone in town taking sides in the battle for equal rights in Oregon, Triinu must stand up for herself, learn what it is to love and have her heart broken, and become her own woman.

A supernatural force will not be denied in Christopher Rice’s latest thriller The Vines (47North).

The dark history of Spring House, a beautifully restored plantation mansion on the outskirts of New Orleans, has long been forgotten. But something sinister lurks beneath the soil of the old estate.

After heiress and current owner Caitlin Chaisson is witness to her husband’s stunning betrayal at her birthday party, she tries to take her own life in the mansion’s cherished gazebo. Instead, the blood she spills awakens dark forces in the ground below. Chaos ensues and by morning her husband has vanished without a trace and his mistress has gone mad.

Nova, daughter to Spring House’s groundskeeper, has always suspected that something malevolent haunts the old place, and in the aftermath of the birthday party she enlists Caitlin’s estranged best friend, Blake, to help her get to the bottom of it. The pair soon realizes that the vengeance enacted by this sinister and otherworldly force comes at a terrible price.

What makes a cultural figure an icon? In Icon (Feminist Press), editor Amy Scholder has collected an array of essays from an expansive list of noted writers (Mary Gastkill, Justin Vivian Bond, and Rick Moody) to expound on who they consider icons and the reasons why.

Celebrity gives us the opportunity to see some small part of ourselves writ large. Some public figures factor more prominently in our thoughts than others, maybe too much. We become fascinated, inspired, even repelled. In these daring essays, some of the most provocative writers of our time offer a private view on a public figure, and in doing so, reveal themselves.

Fans of literary fiction rejoice! This month sees the publication of a new novel by Colm Toíbín and a short story collection from Tove Jansson.

Paul Lisicky: On His New Memoir and Writing Elegies for the Dead
Jennifer Benka Named the Executive Director of the Academy of American Poets
Lambda Literary Announces $1 Million Gift from Author and Philanthropist Chuck Forester