Announcing the Expansion of LGBTQ Writers in Schools

Announcing the Expansion of LGBTQ Writers in Schools 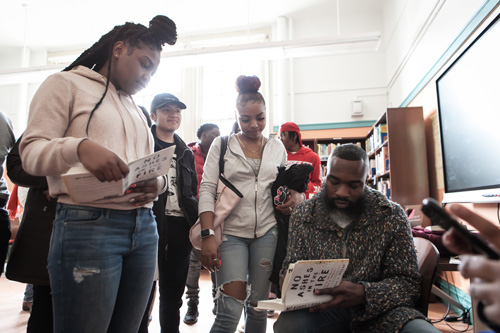 Today, Lambda Literary is thrilled to announce that New York City has quadrupled its investment in the organization’s LGBTQ Writers in Schools program, increasing funding from $100,000 to $400,000, bringing the program to over10,000 students and providing free LGBTQ-inclusive curricular resources to all New York City public school teachers.

“Exposure to LGBTQ literature and its writers normalizes, affirms, and celebrates LGBTQ lives,” said New York City Council Member Daniel Dromm, a former New York City public school teacher and member of the Council’s LGBTQ Caucus. “The program increases the safety and health of NYC LGBTQ students by building empathy for the LGBTQ experience and bringing literature to life by connecting NYC public school students with published LGBTQ authors. We are immensely grateful to the City Council for this support. ”

This year, events include city-wide virtual talks with bestselling authors Benjamin Alire Sáenz, Malinda Lo, Charlie Jane Anders, and others. The program, which has been operating in New York City public schools since 2015, connects students with LGBTQ authors and their work. With this year’s increased support, the program will reach more students than ever before, including those who have had no access to queer literature or queer role models, letting them know that they’re not alone.

“We are immensely grateful to the City for quadrupling its investment in our LGBTQ Writers in Schools program and in particular to Council Member Dromm for being the program’s greatest champion. Young people flourish when they are given the opportunity to engage with queer books and writers, and we are excited for the opportunity to engage with more students in every borough,” said Sue Landers, Executive Director of Lambda Literary. “As transgender young people are under attack in legislatures across the country, we see a great need to urgently expand this program to cities across the country. It is critical that LGBTQ young people know that they are not alone, and that they have bright futures ahead.”

“The conversations and connections our students made with LGBTQ Writers from previous years continues to inspire, educate, and bring joy to our learning environments,” said Devon Shanley, a participating educator from the Brooklyn Collaborative. “The impact of sharing positive and resilient queer stories strengthens ally-ship and allows for possibility for all our students.”

Since the 2015-16 academic year, Lambda Literary has implemented this program in New York City, the nation’s largest school district. Since inception, the program has reached thousands of students in hundreds of schools across each borough, with the majority of those being Title 1 schools.

The LGBTQ Writers in Schools program brings award-winning LGBTQ writers into classrooms to discuss LGBTQ life and literature. Author visits take place virtually as part of a class,  Gender-Sexuality Alliance meeting, or book club. Lambda Literary arranges all aspects of these events, including making the authors’ books available in advance, making the program incredibly easy for schools to implement.

Lambda Literary has a rich network of writers from which to recruit visiting authors and works assiduously to make sure participating authors reflect the racial demographics of New York City students, who are majority people of color, and invites the participation of many authors who are trans or nonbinary. The roster has included Lambda Literary Lammy winners as well as Lambda Fellows and debut artists. Previous visiting authors have included: National Book Award winner Kacen Callender, NY Times bestselling author Adam Silvera, #1 Banned Book author Alex Gino, and bestselling authors George M. Johnson and Leah Johnson, amongst many more.

How The Dead Teach the Living: A Dying Reader's Guide
Noted Publisher and Editor Bill Cohen has Died
Samuel Delany on the Books That Showed Him the World

Sue Landers is the Executive Director of Lambda Literary.