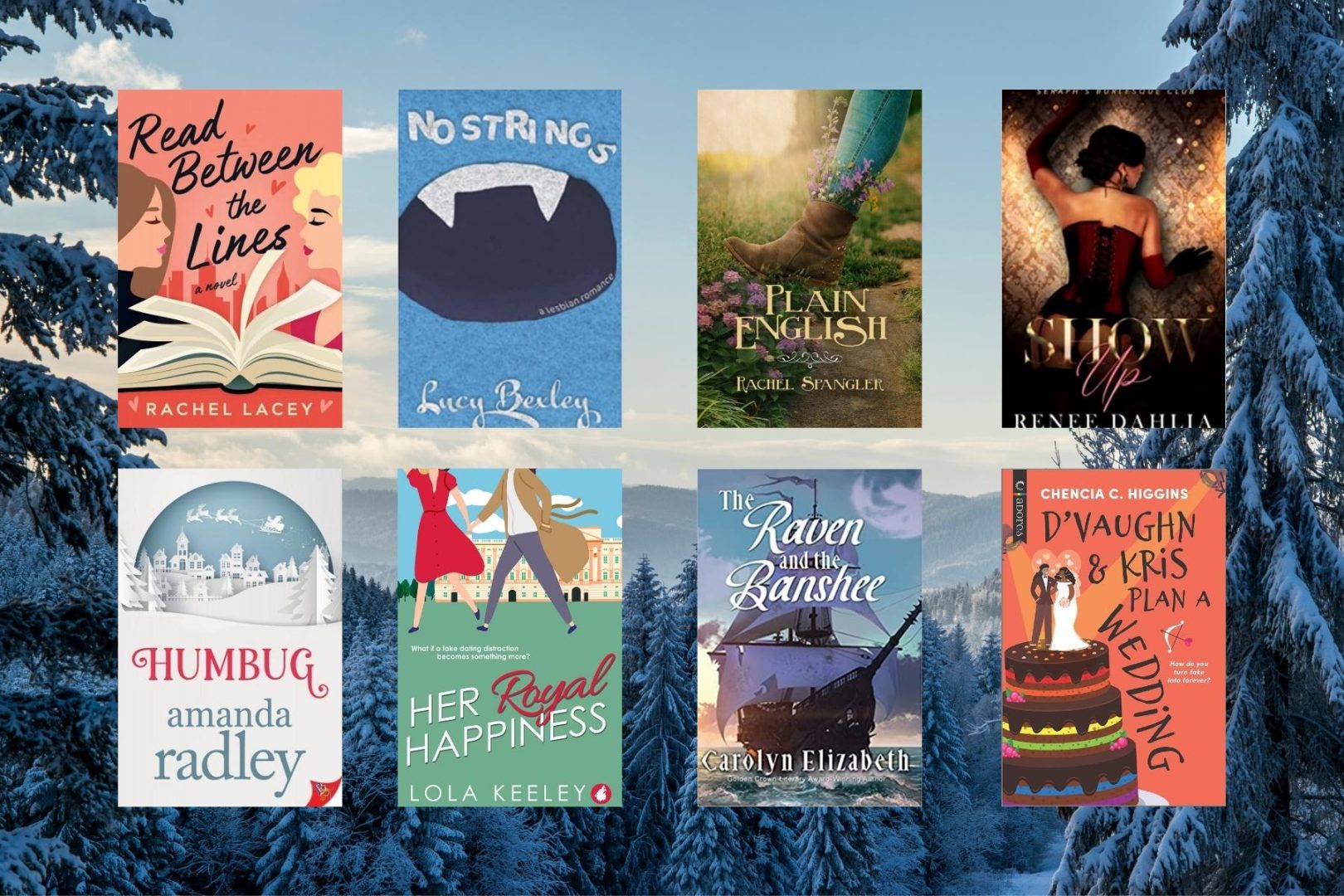 Read These! Thirteen F/F Romances to Warm Your Heart This Winter

Read These! Thirteen F/F Romances to Warm Your Heart This Winter The days are getting shorter, which means more time in the evening to curl up with a hot beverage, a snuggly blanket, and a great queer women’s book.

While this list includes quite a bit of contemporary romance (including classic tropes like fake relationships, friends to lovers, and no-strings situations), it also has some speculative fiction for lesfic readers looking to change up their reading list.

Have you ever thought, “I wish You’ve Got Mail were queer and didn’t have all of that gaslighting?” If yes, then Read Between the Lines by Rachel Lacey (December 1, Montlake) is the book for you. Rosie Taft gets an eviction letter from Jane Breslin’s family’s property business, saying she has a few months to vacate her bookstore. Good thing Rosie has a fun and flirty DM conversation with her favorite author, Brie, to keep her going. Little does she know, Brie is a pen name for none other than Jane Breslin.

Ice queen fans drooled over Elena Bartell in The Brutal Truth. Now, they can look forward to side character Felicity getting her own book, The Awkward Truth (December 8, Ylva Publishing). Felicity’s a corporate ice queen, too, who finds frustration and love with a soft butch veterinarian. Expect comedy, at least one adorable dog, and a sizzling romance.

The first of a new series set in a burlesque club, Show Up by Renee Dahlia (December 9, independently published) is the first fake relationship romance on this list. Yolande’s been invited to her ex’s wedding and the other dancers at the club have a solution: Yolande needs to bring a date to show her ex that she’s moved on. Reiko the bartender to the rescue! So what if Reiko’s had a crush on Yolande for ages?

Humbug by Amanda Radley (December 14, Bold Strokes Books) is a holiday romance. Ellie Caldwell, infamously known as “Christmas Girl” because her love for the holiday knows no bounds, is looking for a career change. Ellie gets more than she bargained for when the CEO, Rosalind, needs a new personal assistant who will be tasked with planning the company Christmas party. Check this one out if “crushing on the boss” is your thing.

D’Vaughn and Kris Plan a Wedding by Chencia C. Higgins (January 4, Carina Adores) is a fake relationship romance with a twist. D’Vaughn and Kris sign up for a reality show where they have a chance to win $100,000 if they can convince their families they’re getting married. But if their families figure out they’re not really a couple, they’re out. Will they find love along the way? (Yes. Yes, they will.)

The Helheim Princess by Tiana Warner (January 4, Entangled) is for all the horse girls and bois who like YA fantasy. Sigrid can only achieve her dream of becoming a valkyrie by teaming up with an enemy valkyrie for a grand adventure. What could be better than valkyrie enemies to lovers?

No Strings by Lucy Bexley (January 13, Independently published) is a contemporary romance. Elsie needs to negotiate the contract for her kids’ TV show. Enter Jones, uptight CEO taking over her family’s media business. The answer to their attraction? A no-strings arrangement, of course. What’s that people say about famous last words?

Want to send out a bat signal to lesfic readers? Just say “lesbian pirates.” The Raven and the Banshee by Carolyn Elizabeth (January 18, Bella Books) is sure to thrill with a Dread Pirate Roberts set up (IYKYK). Content warning for a short sexual assault scene.

Fans of friends-to-lovers romances will be interested in The Map to You by Rachel Stockbridge (January 25, independently published). Sasha and Kinsey are best friends who have crushes on each other. Have they ever talked about it? Of course not. Maybe an emergency road trip is what they need so they can finally kiss already.

Count Your Lucky Stars by Alexandria Bellefleur (February 1, Avon) is the third book in the Written in the Stars series (side note: Written in the Stars won the 2021 Lammy for Lesbian Romance). It’s finally time for the side character, Margot, to find love with her childhood best friend and first love, Olivia. Pick this up if you’re a fan of second chances. Don’t worry if you haven’t read the first two books in the series because each one stands alone.

Her Royal Happiness by Lola Keeley (February 9, Ylva Publishing) is about Alice, the first out queer princess in England. She has to hire an educational specialist to help diagnose her nephew’s learning difficulties. Who better than an anti-monarchist single mom, Sara (who also happens to be an education specialist)? When the tabloids start paying attention to them, Sara and Alice decide the only answer is to pretend they’re romantically involved.

Clear some time on your Valentine’s Day schedule for Her Heart’s Desire by Anne Shade (February 14, Bold Strokes Books). Eve is divorced, single, and ready to mingle — but she’s also closeted. Lynette isn’t looking for love, especially not with someone who isn’t out. And yet… there’s something between them.

Plain English by Rachel Spangler (February 16, Bywater Books) is the third book set in the tiny, fictional, British village of Amberwick. Claire is a local gallery owner and Pip is a rakish member of the local elite. What happens when they agree to a no-strings arrangement, only to catch serious feelings? Plain English follows a new couple, so you can read it even if you aren’t familiar with Modern English or Full English.

Delilah Green Doesn’t Care by Ashley Herring Blake (February 22, Berkley) is about Delilah going home to photograph her stepsister Astrid’s wedding. Delilah doesn’t want to be there, so why not have a little fun by bothering Astrid’s uptight friend and bridesmaid Claire? Some say absence makes the heart grow fonder, but this book seems to posit that forced proximity is where it’s at.

The Banal and the Profane: Mia McKenzie
'Hide and Snake Murder: A Shay O'Hanlon Caper' by Jessie Chandler
‘The Marrying Kind: Debating Same-Sex Marriage within the Lesbian and Gay Movement’ edited by Mary B...

Tara Scott reads a lot of lesbian fiction. She’s a regular reviewer at The Lesbian Review and Smart Bitches Trashy Books, and a former reviewer at Curve Magazine. You can hear her talk about lesbian fiction with authors and other reviewers on her podcast Les Do Books, or ask her for book recommendations on Twitter (@taramdscott)