I was lucky enough to attend the Bourjois headquarters in London for a bloggers event yesterday, and I have to say that it was so organised and LOTS of fun! There was only a select few people, which enabled us all to all interact and make it very personal. The HQ itself is so cute, and looks like a fun office to work in. All the girls that worked there are uber gorgeous,very friendly and so down to earth.

What do I see as soon as I walk in to the room we were supposed to be in?

Cupcakes, and lots of them! 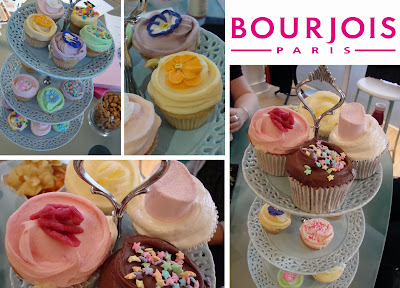 Bourjois have launched a fantastic Spring range that is mainly inspired by corals, peaches and golden hues. This is their ad poster that was created in Paris. 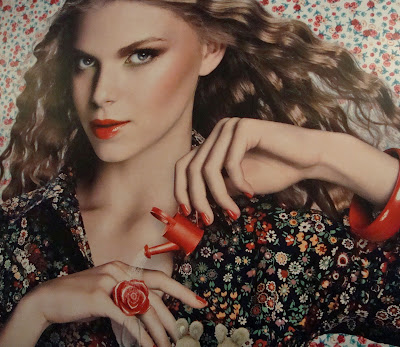 The event started off with lots of eating and talking, we then watched a presentation of the Spring make up demonstrated by Bourjois make up artist Cassie Lomas. She was so lovely, she can do my makeup any day! 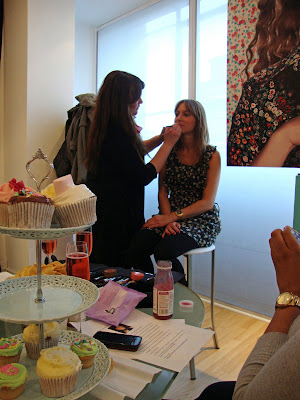 Look how beautiful the models lips look, it's a sheer tangerine tone lipstick she is wearing but look at how pigmented it is. I want!! There was also a gold / green eyeliner pencil which looked amazing worn on the inner 1/3 of the lower lashline. 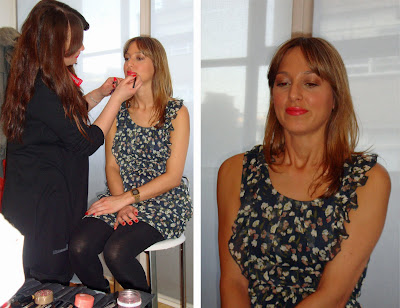 Bourjois is a brand with a lot of history, it was actually launched in Paris by Alexander Napoleon Bourjois in the 18th Century. This was a time when respectable women hardly wore makeup, However, Alexander changed that after his inspiration of the theatre and love for the stars of the stage. He created a light quality stage make up that became the "Official supplier to the imperial Theatre".
Below are a few variations of what their packaging was like in the 18th Century. I think it looks SO beautiful and that the new packaging of Bourjois should go back to its roots. 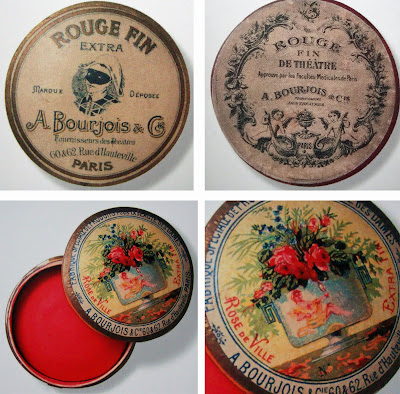 Here's me giving you a pose! 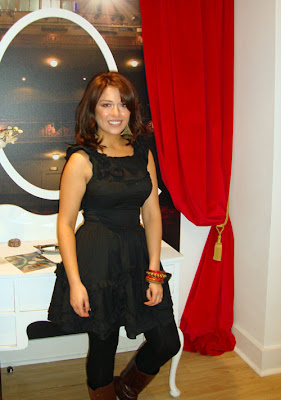 And here's Vex In The City and me giving you some cheesy grins! 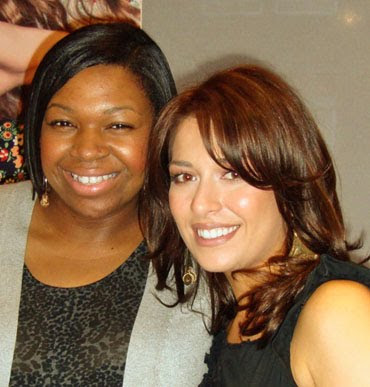 After much chit chat after the presentation, we were to go up and choose what we wanted from a huge selection that was laid out for us. I think this was very thoughtful as we didn't end up with a foundation that was 10X too light for us or a lipstick shade we would never wear. (The photo you see is an 'after' pic by the way!) 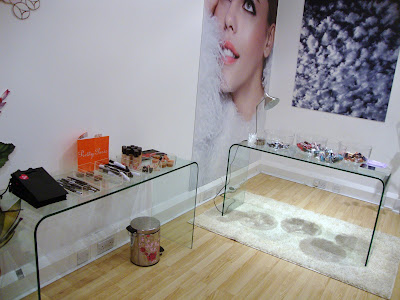 We also had some makeup bags, how cute! 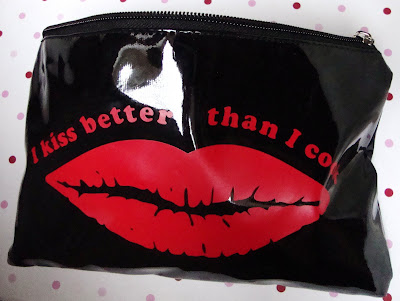 Well, I have plenty to be trying and testing. No1 on my test-list is the new 'Healthy Mix' foundation they have launched. Will I like it as much as their 10hr sleep effect? We shall see! I will probably end up doing a 'favourites' post. 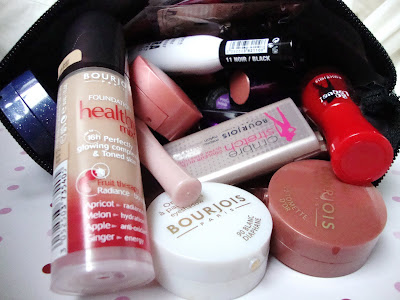 Hope you are having a lovely weekend! X
Labels: Bourjois

Shortiee31 said…
Mmm those cupcakes look lovely! Looks like you and Vex had a great time, both looking as beautiful as always!
Bourjous brings back memories for me.. Bought my first ever eyeshadow from them! A little round pot in Silver.. Haha I didn't know any better :p
7 February 2010 at 11:21

Muhsine Emin said…
@Shortiee31 Thanks hun! Awww a little round pot in silver - how cute, i'm sure you made it work. :)

Nicola said…
Wowee it looks like a great event! And you girls look gorgeous as ever xx
7 February 2010 at 12:16

mizzworthy said…
gutted i missed this - loving the healthy mix foundation so far !
7 February 2010 at 12:43

Unknown said…
It was such a lovely event - and we were some very lucky beauty bloggers getting to raid Bourjois like kids in candy shops!

Your pictures are so much better than mine - by the time I got round to taking pictures I think we had all managed to munch our way through almost all the yummy cupcakes.

Anyway, wonderful way to spend a Saturday - make-up, cupcakes and girly chatter! Looking forward to reading everyone's reviews on our loot!
7 February 2010 at 12:46

Kyanvi L said…
lovely cupcakes... and also i agreed with you... the old packaging looks so much nicer, they should really consider that

Unknown said…
Lucky you! Looks like you had a great time! The cupcakes look gorgeous and i love the look they created, tangerine lipstick is always good in my book!
7 February 2010 at 14:42

AllThingsGirly said…
My 2 yr old neice just saw you're photo and said "who's that she's pretty" bless her :)

Lots of lovely goodies their so generous of them! Can't wait for your review on the new foundation i like the look of it and always on the hunt for new foundation x
7 February 2010 at 15:05

Anonymous said…
Sounds like you all had a great time. Loving Bourjois more unique shade names for the 10hr sleep effect foundation. I'm a light apricot rather then been labelled the usual Ivory, Porcelein or even 'light' or 'pale'. Light Apricot sounds prettier somehow!
7 February 2010 at 16:05

Anonymous said…
The event looks great..luv the makeupbag and the cupcakes xo mw
7 February 2010 at 16:20

Riham said…
Aww looks like so much fun:)) You look absolutly stunning:) I LOVE,LOVE,LOVe your outfit:) The dress is so cute! and love the bracelets:) You look amazing mA!!
7 February 2010 at 17:00

Katie Hayward said…
Seeing those cupcakes puts me in the mood to bake.

Love the vinatge packaging they should defo go back to it.

I love those clear tables! I want one for my make-up area!!

Dye-A-Graham said…
I just want to say that your hair is fabulous and your waist looks super-tiny in that black dress...I can't even tell you were a bit under the weather! The cupcakes look yummy and I must have that tangerine lipcolor...goooorgeous! Glad you had a good time<3<3<3
7 February 2010 at 19:05

Unknown said…
Looks like an extraordinary event! I love Bourjois!
7 February 2010 at 19:31

Glamour♥Junkie said…
Wow you are so lucky...I don't know of any Blogger events in the U.S. If you find out what the sheer tangerine lipstick is called, PLEASE let us know! It's divine! And also feel free to let us know what you love out of the goodies you snagged! :]
7 February 2010 at 23:21

binia said…
your dress is gorgeous!
and i'm loving the orangey coral colour of the lips and am intrigued by the foundation..!
8 February 2010 at 00:41

VampiressDoll said…
Those are fantastic goodies! Those cupcakes are art, I must say. x
8 February 2010 at 09:08

Marina said…
Thank you for the photos, Muhsine!
Looks like you all had a great time x
Marina (Makeup4All)
8 February 2010 at 10:35

@Beautyjunkielondon yes, as soon as I took the pictures, I started eating them!

@Dye-A-Graham thanks hun, but I was so ill, I had a fever and my voice was SO croaky. :(

fantastic said…
what a fun event! your photography is great..especially of the cupcakes :) you're really tempting me with those bourjois foundations...next time i'm on the hunt for one... :) xx
8 February 2010 at 18:56

Christel said…
Oh man, I'm putting on weight just looking at those delicious looking cupcakes!! :P
Love all your photos, what an awesome event!! Can't wait to see all the reviews!
And you looked gorgeous, as usual! :D
9 February 2010 at 06:23

Anonymous said…
i am late to this post. this is beautiful! the cupcakes and the makeup! i have recently declaired healthy mix foundation a HG. i am in between 52 and 53 but i am sure i'd go down to 52 soon now that winter's approaching as i got mine in summer.

that's one of the best bourjois products ever IMO.

Vulpes Gurba said…
Hi, and thanks for your blog!
Could you tell me what is the name or number of Bourjois lipstick the model is wearing?

Petite Style Beauty said…
Hi, i'm a beauty blogger in London too :) i would love to know how to participate in those events, it would be great to meet each other and other bloggers too! Please let me know <3 xoxo

Unknown said…
Hello,
Some of them I have been able to take part in through my school, but the rest I have found out about through one of the English speaking newspapers here: the Florentine or Florence News & Events.
Sociavise
9 December 2013 at 08:56