Today I skimped on the eye makeup, it was just too hot to be layering on tons of shadow. I went for black winged liner to keep it simple. Today is Tuesday by the way but it's 2 o clock in the morning so technically it's Wednesday now... Uhhh there isn't enough hours in the day! 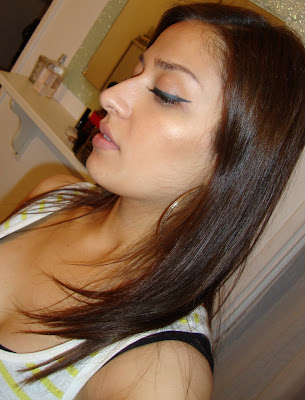 I'm always in a rush before I leave the house so hardly ever end up taking photos with "fresh" makeup, keeping with the theme these photos were taken about 12 hours after application and a hard days work hence why I look so tired. But as you can see the eyeliner is still in tact. 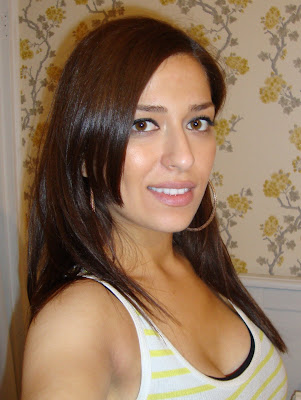 My belly kind of looks the same as it did a couple of weeks ago, I still don't even look pregnant unless I'm wearing a white horizontally striped top :) I'm just over 16 weeks / 4 months now and am slowly starting to get my energy back and rekindling my love for homemade Turkish food! 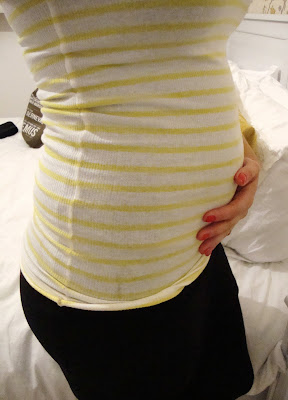 Today I realised I don't own a white shimmery colour to highlight the inner corners of my eyes, I immediately fixed that problem by purchasing Mac 'Crystal Avalanche' eyeshadow which is a veluxe pearl. 'Crystal Avalanche' won over 'Shroom', 'Phloof' and 'White Frost' as the texture is much softer and the colour was as bright as I wanted it to be. See a swatch below. 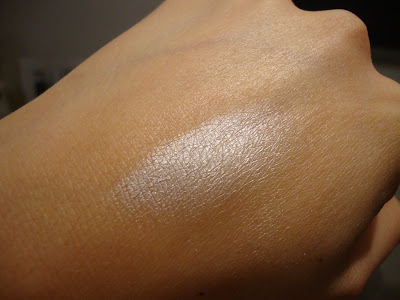 I don't know what's wrong lately with mascaras but anything I use doesn't give me the effect I desire. It just looks dry and clumpy ewwwww! My favourite L'oreal voluminous isn't performing as well as it used to and of course I had to fix that problem too. I repurchased the Mac Zoom Fast Lash mascara as I really enjoyed using it the last time I had it. 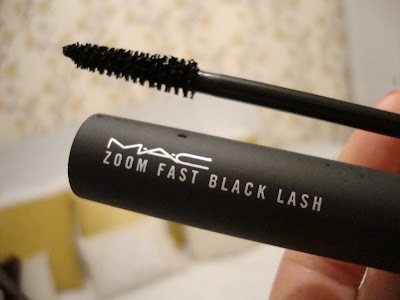 Are you rocking winged eyeliner in the heat, do you own a shimmery white eyeshadow and are you having problems with your mascaras?

Chit Chat over, I can go on forever but it's getting late and I need my beauty sleep! :)

DOWNTOWNCHICAGOBARBIE said…
Your makeup looks ice and fresh after 12 hours I wish mines look like that.
20 April 2011 at 03:01

dani@callitbeauty said…
your makeup looks flawless, even after 12 hours of wear!

as for eyeliner, i have the opposite problem in that it tends to shift to my under eye area after a few hours.

also, i'm using l'oréal voluminous carbon black lately and it dried up much faster than the regular voluminous one so i think i'll change back to that.
20 April 2011 at 03:21

Anca said…
I love how you say you fixed that problem like it's an existential crisis. Funny you mentioned that though i "fixed" the same problem with Bourjois 90 Blanc Diaphane haha
your makeup looks amazing after such a long time, do you use a primer? you look beautiful

Madelynne said…
Yeah I like to go with a winged liner too when it's hot or maybe just some half lashes in the corner. Your's are so perfect I'm still working on getting my eyeliner to match up nicely.
20 April 2011 at 06:03

Miss Vendella said…
I love winged eyeliner look. its perfect for every occasion but i have the same problem..it always transfers even if i set it with an eyeshadow, if i use primer and powder my lids!! But i got used to it...lol Btw i can't believe how fresh you look after 12 hours! * jealous* lol love your post as usual! :)

Lilit said…
Your winged eyeliner is just perfect! And your skin is just glowing, as always. I'm hopeless at doing winged liner, I always hate the result so end up smudging it with shadow instead.
20 April 2011 at 08:59

LillianZahra said…
Love your winged eyeliner. I'm having mascara issues too at the moment - I have so many mascaras and yet they all seem to be performing badly! x
20 April 2011 at 10:56

Tubi said…
hey muhsine, I had lso problems with my mascara... clinique high impact mascara solves the problem :) I also go for winged eyeliner and no eyeshadow look, even if it is already not so hot in germany :)

Asiya said…
I think the "fast" mascaras have a tendency to dry out in the tube faster.

Also, I like the Lancome Artliner and L'oreal Lineur Intense have this really great formula that kind of peels off rather than smudging, so even if you make a mistake, it's cleaner to fix.
20 April 2011 at 14:50

Riham said…
Aw your belly is so cute<3 mA! I actually am really showing now, you will be shocked , it's like it grows over night! So don't worry, you will defiently get there soon!

As for Mascara, Have you tried Loreal's Voluminous Million Lashes.. I love it! Its really nice, and give you that false lash look very naturally!
20 April 2011 at 15:05

i own that mascara and i actually like it a lot more than most mascaras :)

MakeupByAngel said…
I am loving winged eyeliner right now! Mascara has always been an issue with me, once I find one I stick with it and nothing really ever compares. LOL BTW Your baby bump is so cute.

Unknown said…
looking so beautifullll!!!! Liner is absolute perfection, and you definitely have "the glow" shining with happiness you are my lovely :))) xoxo
20 April 2011 at 19:14

missdazed said…
I wish my makeup looked like that after 12hours! So jealous. I'm just going for winded liner a lot these days too
20 April 2011 at 23:10

Kimberly M. said…
Please post more of your recipes! I've tried all your recipes and they're all beautiful! Your belly is looking amazing btw!
21 April 2011 at 08:27

fantastic said…
there is no such heat here, so no..not doing winged eyeliner in the heat! what a nice little contained bump you have there ;) and mascara is doing the same thing with me--except one step further, by transferring (like your liner) onto my lids :( glad to hear you're feeling better xx
21 April 2011 at 22:01

Reimagined Restorations said…
I love your blog! Im a new follower, and I cant wait to read more!

Gracey Williams said…
You are so gorgeous! I love the winged eyeliner look but i just can't get it right on myself for some reason :/
22 April 2011 at 17:55

sparkle beauty blog said…
i didnt know what to do with my crystal avalanche before now, i will try it for the inner corners now.x
23 April 2011 at 07:04

pelininstyle said…
You look so sweet:) I was not looking pregnant until 6 months and a half now I'm in the 9th month and I have one big belly:))I craved for manti all the time:) although I don't have the chance to find it so I was eating pasta with meat and youghurt:)))
I have you a have a healthy pregnancy:)
www.pelininstyle.com
15 May 2011 at 20:50