I checked out the new collection 'Semi Precious' by Mac this morning as it launched in UK stores today. 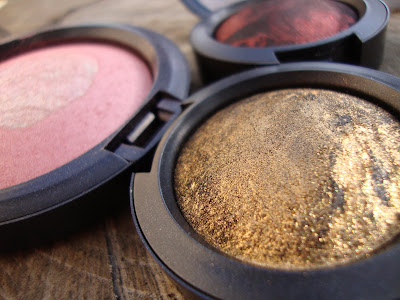 SMOKED RUBY (Mineralised Eye Shadow - Melange of burgundy and black) This eyeshadow has a blackened deep brown base with veining of a darkened red which when swirled altogether creates a rich brown shade that's shot through with red and black. It's smooth, buttery and incredibly pigmented even when used dry and without a base. I applied this in the store to my entire eyelid with my fingers and it looked beautiful, perfect for creating a quick and interesting sultry eye. I own nothing like this as it's not the sort of shade I typically go for, but once I had swatched and applied it, it just had to be mine! 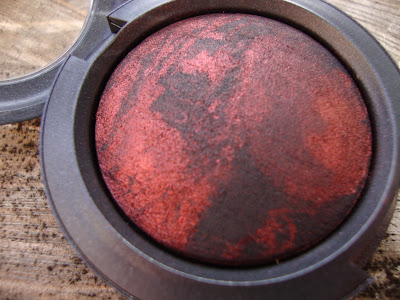 GOLDEN GAZE (Mineralised Eye Shadow - Melange of gold and black) This is a beautiful golden bronze shade that has a black base. When swirled and applied it has a vivid golden sheen that's shot through with black. It's smooth in texture, buttery and incredibly pigmented even when used dry and without a base. This eye shadow was the standout of the collection for me personally, it's simply divine and will be great for summer with plenty of gold and bronze jewellery! 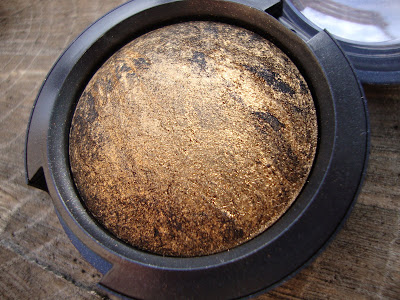 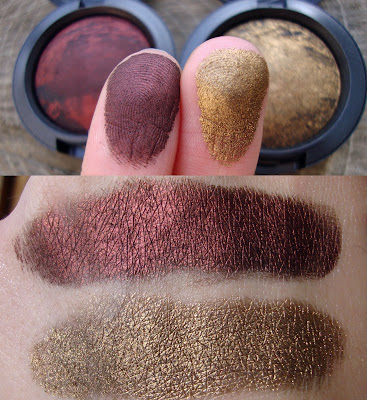 SEMI PRECIOUS ROSE QUARTZ (Mineralised Skin Finish - Rosy pink base with inner circle of silver, lime, white-pink, and copper) The outer side of this msf is a peachy pink which applies with a slight sheen, the centre part is a cool pink toned beige and has some glitter and I love the colour when it's swirled together. It can be used as a blush or highlighter depending on your skin tone. It's pigmented and what you see is what you get, however I wish the centre part was a little smoother in texture, but nevertheless it's still a fab product. 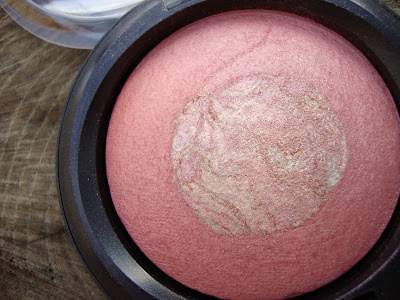 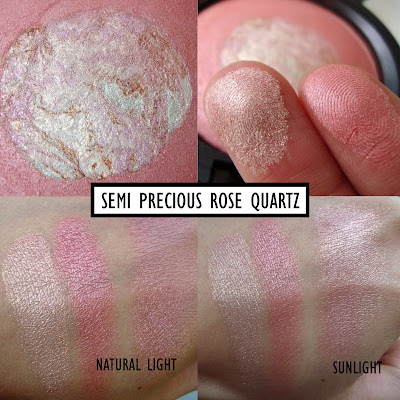 Here are some closer swatches, I have compared 'Rose Quartz' to 'Stereo Rose' msf and 'Daft Pink' mineralised blush. 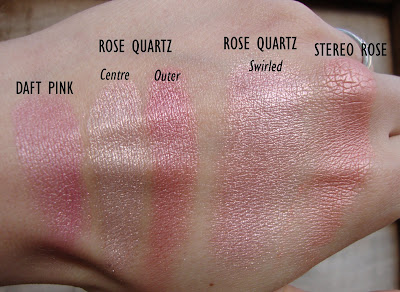 The OUTER portion of 'Rose Quartz' is reminiscent of 'Stereo Rose' but a pinker version. The swatches speak for themselves so I'll stop typing! 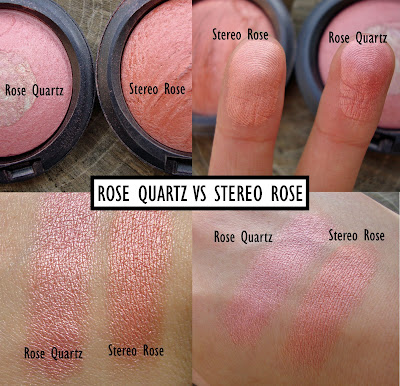 I also grabbed a mini fix+ for my handbag, how cute! 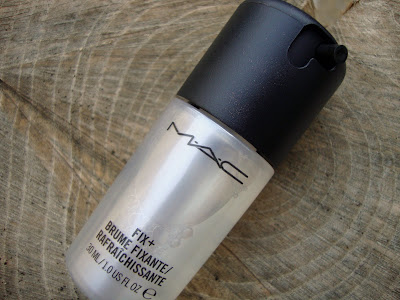 FYI: Fashion Flower launched today too, but I totally skipped that, it's pretty but boring.

What are your thoughts on 'Semi Precious'?

jennie said…
Okay, I need Rose quartz in my life ASAP! What a beautiful colour! Oh dear, and I told myself I wouldn't be tempted in to purchasing anything hehe xoxo
7 July 2011 at 20:32

kay eh tea ei. said…
somehow managed to completely sleep through this collection, but that MSF has to be mine. so so so lovely! xo.
7 July 2011 at 20:42

MaviDeniz said…
i love your swatches. rose quartz is so pretty and i love that golden shadow too! i haven't been to the MAC counter to check these out yet but im definitely going this weekend!

Sheefa F said…
I think the collection is so original! Love the shades you got.

Muhsine Emin said…
@JJ All mineralised products are different, I got lucky with mine, some of them are portioned off and u can use the colours seperately too....
7 July 2011 at 20:54

Charlotte Amber said…
Love the eyeshadows but i totally couldnt pull of the red, the gold maybe, hmmmm

BlushCrush said…
Great review of the products you bought and the other items in the collection x
7 July 2011 at 21:13

Steph said…
i so wana go and check this collection out! no time today =( boo

Andrea. said…
I haven't purchased any Mac in a long time. Well besides my foundation. I totally missed out on all the collections, but this one catches my eye mainly because I love mineralize blushes I wish they had more of a variety though. I want to place my order but I think I'll wait to see some of the blushes in person.
7 July 2011 at 22:11

Kajal Couture said…
I like that MSF a LOT!!! I got that and the eye brushes. I really like them because I can use the synthetic hair side for eye primers and the natural hair side for powder shadows. The brushes are pretty useful to me. In any case, great post!
7 July 2011 at 22:22

got it, love it said…
hmmm i havent paid attention to the eyeshadows, but they look so pretty, especially the red one, ill go and check it out again 2morrow! i just picked everhip from fashion flower! actually got 2 of them :)
7 July 2011 at 22:53

Laiqah said…
Oh Muhsine you're so horrible for showing me how gorgeous Rose Quartz is!
(I suppose it's my fault for loving your blog and clicking on your update :))
I have Stereo Rose and I'm so glad you compared the two... Rose Quartz will be mine!

www.Victoria-Gabrielle.blogspot.com said…
im most excited about smoked ruby it is such a stunning and unique colour x
8 July 2011 at 01:53

LipGlossGossip said…
Great swatches! I need to pick up Rose Quartz, it's the only thing on my list from this collection! :)
8 July 2011 at 03:41

sparkle beauty blog said…
I have the stereo rose msf so i think i will pass on this collection as i gear more to peachy tones anyway. rose quartz does look pretty though.xx
8 July 2011 at 10:36

@Love Always, Me. - Smoked Ruby is much MUCH darker than cranberry and more black/brown.

Peachypops said…
Oooh, very pretty and very tempting!
I was going to get the Rose Quartz but have decided on Crystal Pink :)
x
8 July 2011 at 18:42

Your haul looks really great.
If you don't mind please share it with our fashion haul community.
www.chichaul.com

Unknown said…
Smoked Ruby and Golden Gaze are stunning colours. I haven't looked at this collection at all but I'm tempted by both of those. Thanks for the swatches.
10 July 2011 at 19:20

nivi321 said…
Love the rose quartz the others I don't think I would waste my money. The remind me of accessorize make up collection. The may be some dopes there. Great clear swatches, thanx for that!
11 July 2011 at 07:46

Billie said…
Golden gaze looks amazing! Why is this not in my life! :P