Last night I was a cat!

When hubby told me we had a fancy dress birthday party to go to I was a little confused to say the least. What does one dress as without spending much money?

Miawwwww! A cat of course. 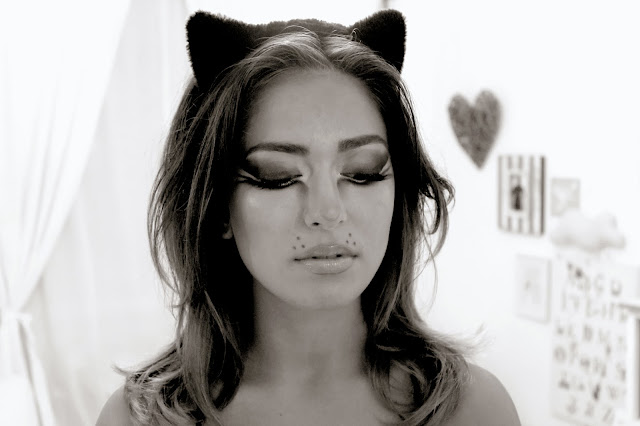 It was all in the makeup! (The photo I uploaded onto IG below) 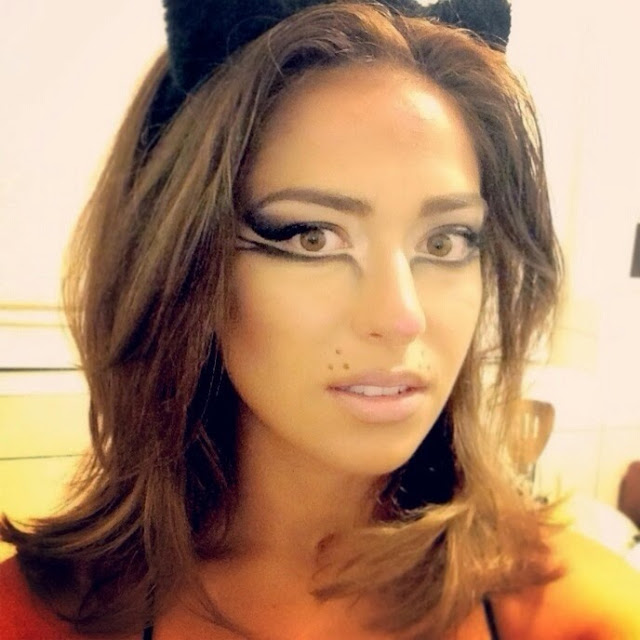 I didn't have a specific look in mind when creating the cat makeup and kind of made it up as I went along to suit my facial features. I think it's important to do what suits you and not to copy a look entirely. Although feel free to copy this look as it's quite a soft look and one that you can't really go wrong with.

EYES - I started with UD primer potion, used washi tape to create the sharp line and used UD Naked2 palette - 'Blackout' to achieve the smokey look, blended it out with 'Busted' & 'Tease'  with 'Foxy' to highlight which I used over 'Benefit 'It stick'. I also used 'It stick' in my waterline. I used Mac 'Engraved' powerpoint pencil on my lower lash line, and then got a fine tip angled brush which I wet & used to drag out the colour and create two lower flicks for a more 'cat eye' feel as I knew I wasn't going to be drawing whiskers. I then blended the whole thing out with 'Busted' and sharpened the edges with concealer. I used black mascara & the corners of 'Sleek Makeup' fake lashes in 'Sphynx 231' which were fluttery yet natural. I used Mac 'Brun' e/s to fill in my brows.

SKIN - I used my beloved Mac 'Face & Body' foundation with Mac 130 small stippling brush after I had moisturised & spritzed Avene Thermal Spring Water to my face. I used Benefit 'Hoola' to contour and Estee Lauder Bronze Goddess bronzer in medium to add colour.

NOSE - I used Rimmel  eyebrow pencil in 'Hazel' to draw a small outline and applied a Clinique chubby crayon in pink as a base and used Mac 'Tippy' blush for the pink nose which i blended upwards. Initially I tried a small black nose but I couldn't stop staring at the centre of my face so wiped it off and opted for a pink nose which was more subtle & cuter in my opinion. I also used the Rimmel pencil to draw 3 dots on either sides on the upper parts of my lips. 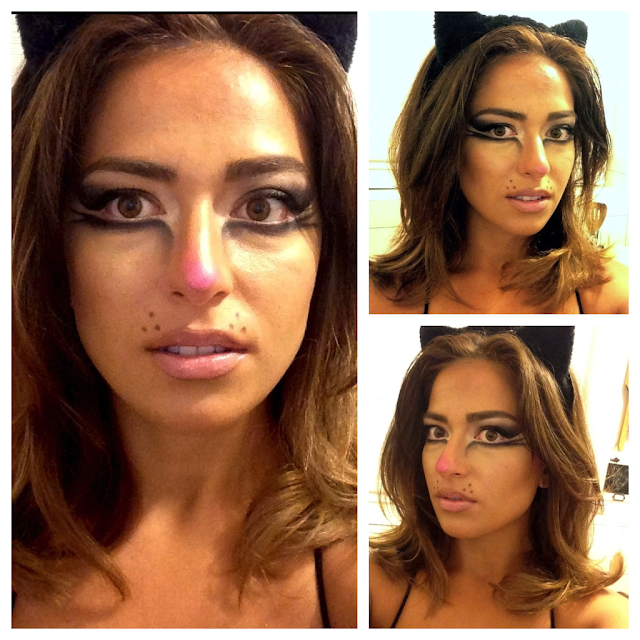 For the outfit I got some black faux leather leggings from H&M for £14.99, made an amigurumi style crochet tail which I stuffed with pipe cleaners to make it twist & sewed it on, got some cat ears (£3.50 & long gloves £5.99) from a fancy dress shop (Escapade in Camden/London) & voila. Easy Peasy & affordable. I also teamed it with a vintage black leather belt to give it more character but anything will do as long as it's black. 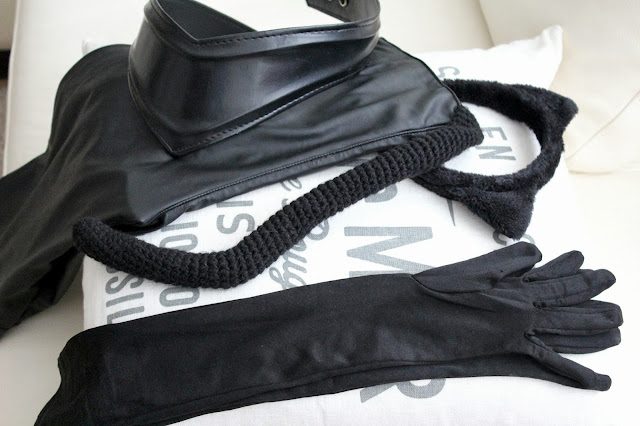 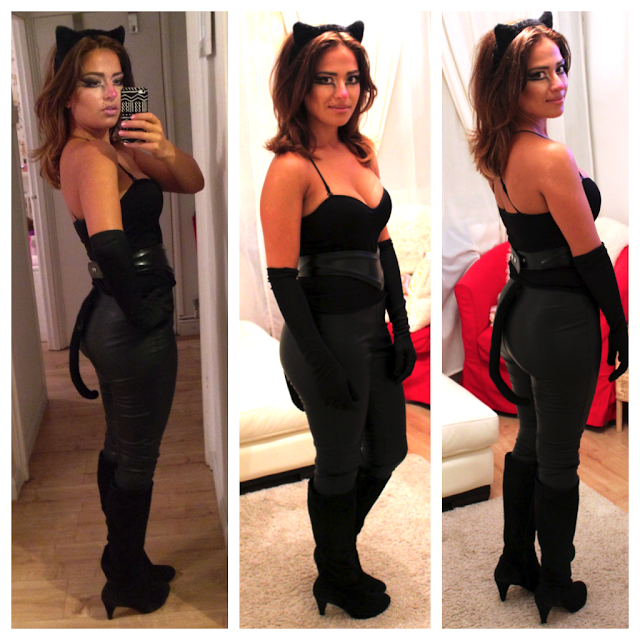 The hubby was SWAT which suited him perfectly, there was a convict for him to arrest which was fun! :) Everyone had great outfits, the birthday boy was 'Zorro' which was very cool, there was a banana - yes a banana lol, Mario from Mario brothers, Shrek, a joker, Snow White and many more.

Are you dressing up for halloween? What would you be for a fancy dress party?
Labels: Make up looks

Unknown said…
The make-up is stunning and so creative! Will have to try this out. Love the whole outfit and even more that its done cheaply, nothing worse than buying fancy dress outfits online , they can get crazy expensive! Trust me I've done it - not good!
Hope you had a lovely time hun!

Shireen said…
u look like u had fun :) loved everything about this post :)u looked sexy and perfect for halloween!I havent been to a fancy dress since school :P but it would be wonderful to dress up again :)
22 September 2013 at 15:44

Unknown said…
The post is very informative. It is a pleasure reading it. I have also bookmarked you for checking out new posts.
Travesti
23 September 2013 at 07:09

Bamby said…
i have lost your blog when you wore pregnant, hehhe my laptop was stolen and i forgot your blogname, i am so happy to find you and the babygirl i sooooo sweeeeeettttttt
greatings to you from Serbia
23 September 2013 at 22:45

Unknown said…
The makeup in this is great, I will certainly be trying it out at some point :)

Zahra said…
Muhsine I am soo happy that you're blogging again! You're looking wonderful and mashallah you have a beautiful and happy family! I love reading your posts, keep it up please :)
28 September 2013 at 15:55

Unknown said…
You just got me in the mood to dress up!!! I might make myself a DOLL

Unknown said…
Wow!
I love it, Bubbles, you and your hubby lookjust too hot together!
I particularly adore your cat makeup, it is amazing!
Thanks so much for sharing,doll
Catanya
29 September 2013 at 11:49

Karla | www.misskarla.com said…
Adorable makeup and costume! :)
I have no idea what to dress up for Halloween this year, all my friends are going to Romania/Transylvania to celebrate Halloween there, unfortunately I couldn't make it so I doubt I would even do anything special this year as I'll be all alone! xx
2 October 2013 at 16:33

Unknown said…
Awww you look so pretty in your costume! Rawr! Cheers!

Mordo crosswords said…
For many, the aboriginal coiled boots will consistently be the atramentous covering numbers with the about four inch heels beat by Honor Blackman in the Avengers, Julia Roberts in Pretty Woman, and Madonna on tour. As their acceptance has spread, however, there are abounding styles that accept acquired - and you can get them in any blush of the rainbow.